Gold goin' red ahead of the Fed

As prior penned in "Gold's June Swoon", the technical and seasonal case was laid out for Gold to settle June "nearer to 1800" than to 1900. Thus far, that is the trend, albeit with 13 trading days remaining in June. And the Big One is this Wednesday (16 June) when the "FOMC-11" (Mmes Bowman, Brainard, Daly and Messrs Barkin, Bostic, Clarida, Evans, Powell, Quarles, Waller and Williams) vote to either maintain their Bank's FedFunds target range at 0.00%-0.25% ... else bump it up to 0.25%-0.50% ... perhaps spiced with a bit of purchased paper taper.

This is the most important Federal Open Market Committee vote in better than a year (since 16 March 2020) when COVID convinced 'em to cut the rate down to the present target range. Further, Wednesday's Policy Statement -- should it incorporate a hike in the rate -- is a key fundamental and uplifting case (given currency debasement otherwise being ignored) that can get Gold back onto a positive track into month's end. For as you regular readers know: Gold has proven to have done well when the short end of the yield curve actually rises; (recall the FedFunds rate and the price of Gold increasing together through the three-year stint from 2004-2006). Otherwise should the FOMC sit tight as they see, we 'spect Gold's "nearer to 1800" scenario shall be what we'll see.

To be sure, the Fed now sits upon "A Delicate Balance"--[Marian McPartland, '66]. In recent missives we've derogatorily referred to the Fed as being "scared s**tless" toward (finally) upsetting the outrageously overvalued stock market by merely increasing the cost of money. The last thing the Fed wants to do given the economy having recovered from COVID is to crash the now all-time high S&P 500 (4247), for which at this writing our "live" price/earnings ratio is 53.3x, with Bob Shiller's non-cyclically-adjusted version not far behind at 45.1x. Already for months, the yield on the riskfull S&P (now 1.375%) has trailed that of the riskless 10-Year U.S. Treasury Note (now 1.462%), let alone that of the 30-Year U.S. Treasury Bond (now 2.152%).

The perfect "leading statement" there, Squire. For if one defines "yield" as that rate of return to be realized upon Gold reaching up to our opening Scoreboard's present valuation of 3861 (i.e. its "par value"), given price having actually settled yesterday (Friday) at 1880, that's a 105.372% "yield".

Indeed "To raise, or not to raise, [perchance to taper] that is the question: whether 'tis nobler in the mind to suffer the slings and arrows of outrageous debasement, or to take Gold against a sea of troubles, and by opposing, end them." (Way to ad lib the Bard's 1600 script there, Hamlet, back at a time when Gold was -- as 'tis today -- a currency).

To be sure, higher Dollar interest rates bring attraction to the Buck. And yet contra to conventional wisdom -- given Gold plays no currency favourites -- its price can rise right in stride with the so-called oxymoron "Dollar strength", (recall for example their multi-month ascensions together in both 2010 and 2014).

Regardless of whether the FOMC votes to raise or not to raise or taper for a phase, we have to think this time 'round there shall be dissent amongst the ranks rather than the usual unanimous "voting for the monetary policy action were" ... some may stand pat, some may vote taper, some may say hike. On verra.

Either way, here is the present state of Gold's weekly bars from one year ago-to-date, the prior "outside week" having now been followed up with an "inside week", (i.e. a "lower high" and "higher low") as price continues red ahead of the Fed:

Meanwhile we continue to wonder how long 'twill be before the COVID-recovered economy next keels over. Confiscatory tax increases provenly are the killer regardless of how "compassionately" they're couched. Most folks figure that out upon being laid off. The StateSide the capital gains tax is going up as is tax on corporations. And now, let's add on to that a "G-7" global minimum tax. "Sorry, Chuck, we know you're set for retirement and a pension next year, but we now have to instead divert that dough into some foreign thing." Have a great day.

As comprehensively demonstrated throughout history, such tax increases are ultimately paid for by the elimination of jobs, without which the consumer still has to pay their tax bill on whatever they nonetheless earned. "Here we go again!" And here's the Economic Barometer, for which 16 incoming metrics are due in the week ahead, not to mention the Fed (!):

Elsewhere, given the economically-weaker EuroZone, the European Central Bank is maintaining their stimulus policy, even as they're a bit more upbeat in their outlook. Then over in China, 'tis said their producer prices are inflating more than they have in a dozen years. (And is COVID coming back in southern China? "Uhh boy...")

Now let's turn to the precious metals specifically from three months ago-to-date by their daily bars for Gold on the left and for Silver on the right. Notably for the yellow metal, its baby blue dots continue to cascade as the current price uptrend further loses its consistency, whereas price for the white metal is attempting to defy same. But as you regular readers well know, 'tis the "Baby Blues" which generally will out:

Then in looking at their 10-day Market Profiles, Gold (below left) has succumbed below its key 1895 trading resistor, whilst Silver (below right) is treading water above its 27.90 supporter. "Sink or swim, Sister Silver?":

And thus here is how Gold stacks up at present:

Gold's Value per Dollar Debasement, (from our opening "Scoreboard"): 3861

Toward closing, we're more stock market wary than ever. You already know of the beyond-belief level of the S&P's P/E, and that its MoneyFlow is hardly supportive of the Index's unsustainably high level in extremely thin trading conditions, (which for you WestPalmBeachers down there is like mowing your lawn pretending there's gasoline in the empty tank). Indeed from our "You Won't Find This Anywhere Else Dept." today you personally (in a trading vacuum) can move the S&P 500 Index one full point with just 63% of the amount of money needed to so do just back on 08 April. And if that doesn't make the point of the market being thin, try this statistic: yesterday's (11 June) total share volume traded for all of the S&P 500 constituents was 1.7 billion shares. The volume one year earlier to the day was 4.0 billion shares, well double that of today. Then on top of it all, this display popped up during our end-of-day data run on Friday night, (the "Spoo" is the S&P 500 futures contract):

And finally from the "Last to Figure It Out Dept." this past week Deutsche Bank expressed concern over inflation as a global "time bomb". (Nothing like realizing the obvious a year after everyone else). At least you realize that having some Gold is obvious! 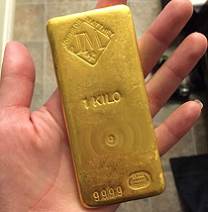 Cheers! (And mind that Fed!)