In yesterday's opening letter I spoke about the fact that analysts seemed to be divided into two camps in regards to how they view the current monetary policy of the Federal Reserve. My view was that the Federal Reserve would maintain its dovish monetary policy, remaining extremely accommodative and continuing to keep interest rates near zero. The other camp believed that the Federal Reserve would take on a more hawkish tone and begin to talk about talking about tapering their asset allocations and raising interest rates. Unquestionably the latter camp got it right.

The statement released continued to acknowledge upticks in inflation raising their inflation target 3%. The statement confirmed that the Federal Reserve would continue their asset purchases of $120 billion per month. The commitment to maintain interest rates near zero through 2023 changed, causing the financial markets to sell off sharply. The biggest change occurred in the revised "dot plot" that caused gold to sell off sharply.

The Federal Reserve's official mandate of continuing to purchase assets at the current level until the economic data indicates "substantial further progress" was confirmed. Also, the Fed mandate to continue to show extreme patients would lead to stable or higher gold prices was the exact opposite of today's outcome. 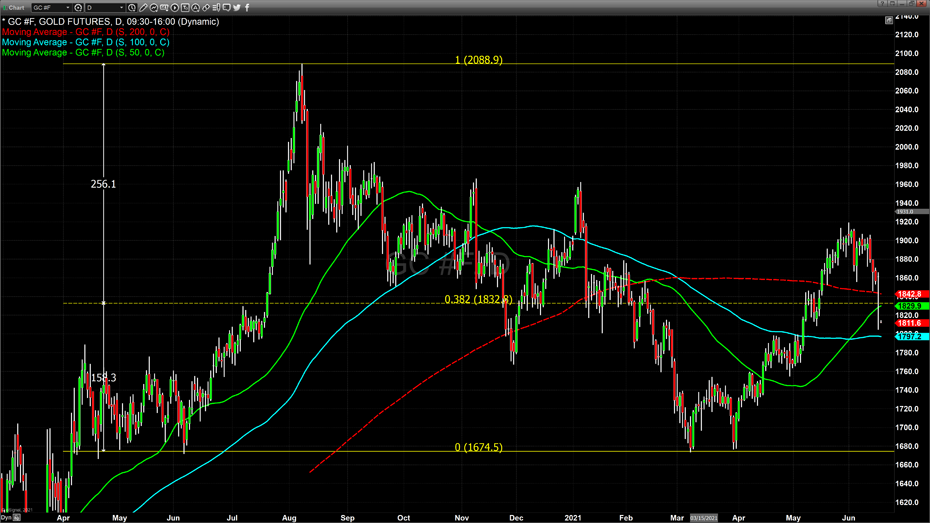 Today's statement and Chairman Powell's press conference showed a more hawkish Fed demeanor. Although the Federal Reserve, for the most part, maintained its current monetary policy there was the modification to the timeline (dot plot) to raise interest rates that moved the financial markets lower.

The Fed's dot plot chart showed 11 of 18 officials expect at least two rate hikes in 2023. In March, only seven expected one hike. Seven officials now see the first hike next year, up from four in March.

This was enough to set the tone of this month's FOMC meeting as more hawkish than the last meeting. The outcome sent stocks lower and caused gold to tumble in a freefall.

As of 5:30 PM EST gold futures basis, the most active August 2021 contract is trading $43.80 lower and currently fixed at $1812.60, after trading to a low of $1804.40 and recovering slightly. Today's dramatically lower pricing was due to a combination of higher yields in U.S. debt instruments, a strong U.S. dollar, and market participants selling pressure based upon the revised timeline of interest rate hikes.