For the first time since the onset of the global pandemic, which began in March 2020, the Federal Reserve began dramatic steps to keep the economy from crashing and then create an accommodative monetary environment for the economy to recover once the vaccine rollout began. However, during the last year and a half, the Federal Reserve has remained extremely nebulous as to when they would begin to unwind the current rate of interest which is set near zero, as well as their asset purchasing program of $120 billion per month of mortgage-backed securities and U.S. debt instruments.

When questioned during former FOMC meetings as to their timeline to begin to taper or raise interest rates they answered that it was data-dependent and it is not time to even begin discussing rolling back the current monetary policy. That all changed this week when the FOMC meeting convened and released its statement. It conveyed a different tone and started the clock with a rough timeline as to when they will increase rates (with two rate hikes set for 2023). They also acknowledged that they have begun to talk about talking about tapering. It is now widely believed by analysts that we could see some tapering as soon as March 2022, with a series of two rate hikes in 2023.

This sent into motion a virtual meltdown in the financial markets, including the Dow, as well as the commodity markets, with the precious metal markets being hit extremely hard. None of the precious metals were immune to the selloff with gold, silver, platinum, and palladium all losing serious ground in the last three days of trading. Palladium, for example, has given up $339 in the last two days of trading and with today's decline of $47.70, is currently fixed at $2,464.50. That is an 11.964% drop in two days of trading. 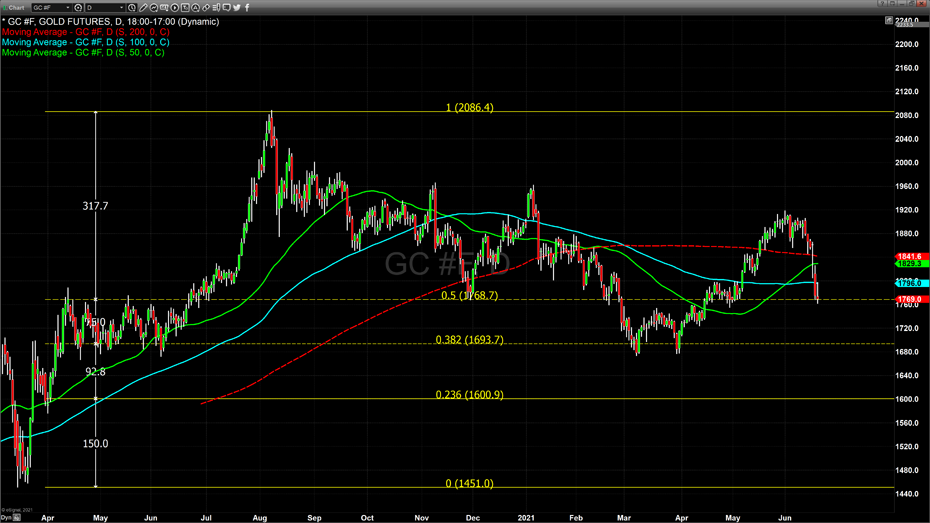 Gold futures basis the most active April 2021 Comex contract traded to a high on Wednesday of $1,865, and after factoring in today's $10 decline is currently fixed at $1764.40 over $100 of losses accumulated in the last three days of trading. While dollar strength had a definitive influence on gold going lower, it was selling pressure from market participants that had the greatest impact on this week's losses.

For the third consecutive day, the U.S. dollar index has gained tremendous value and is now fixed at 92.32. The dollar has gained almost 2% (1.97%) in the last three trading days, and a year-to-date gain of roughly 2.2% accounts for almost all of this year's dollar strength. 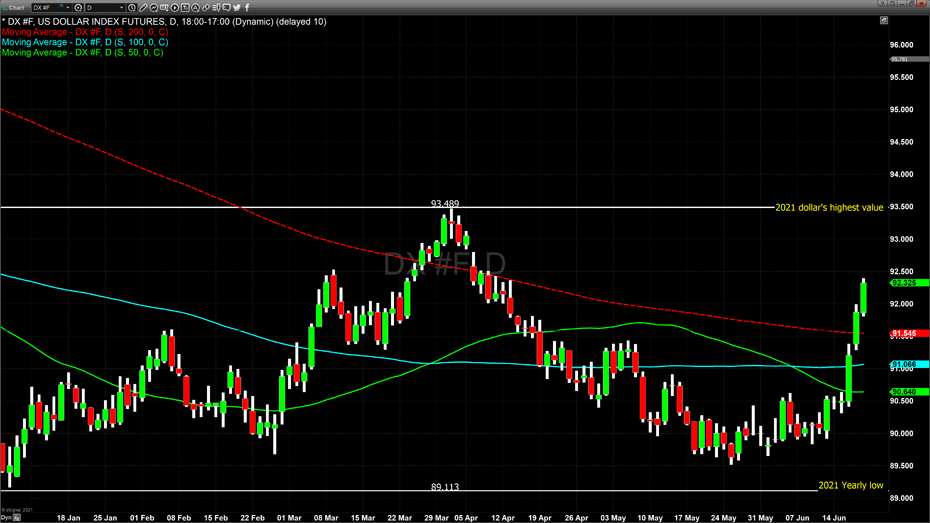 The key to this dynamic change was that for the first time since the beginning of the pandemic, the Federal Reserve announced a nebulous timetable, but a timetable nonetheless, in essence, starting the countdown or clock to when the Federal Reserve begins to roll back components of its very dovish and accommodative monetary policy.

Increased selling pressure was added today when voting Fed member James Bullard, President of the St. Louis Federal Bank, said he expects the central banks to raise their benchmark Fed's funds rate in 2022. In an interview with CNBC today, James Bullard said that it was "natural for the fed to tilt hawkish at its meeting earlier this week given recent strong inflation readings."

Although when the Fed will begin to roll back some of their aggressive monetary stances is still not crystal-clear the first steps to developing transparency and notifying the public. They have started the clock announcing their intent to roll back the current accommodative interest rates and quantitative easing and filled in possible timelines being considered. This month's FOMC meeting was unlike any other FOMC meeting over the last year and ½, and like it or not, the Federal Reserve clarified a rough timeline for the first time since the pandemic began over a year ago.