The Producer Price Index for the month of May was up 6.6% year over year. This was the greatest yearly increase since the Bureau of Labor Statistics began tracking the data. In addition, the Headline Consumer Price Index rose 5% year over year in May, which is the fastest pace since August 2008. Import Prices also surged in May, soaring by 11.3% in the past twelve months—the greatest surge in a decade. However, those blistering rates of inflation didn't rattle the bond market much at all. In fact, the bond market is completey unfazed by the current inflation data.

Below is a chart of the Benchmark Treasury yield intra-day on June 10th, the day of the hottest CPI print in 13 years. And it wasn’t a sell-the-news even either, because interest rates had been falling into the release of the strongest inflation print in over a decade.

But it’s not just the bond market that is quiescent about inflation. Commodity prices have started to slip too. Lumber prices are tumbling, as new home prices have now climbed above the reach of most consumers. And, Dr. Copper is declaring that peak growth and inflation has arrived too, regardless of the strong data seen today. 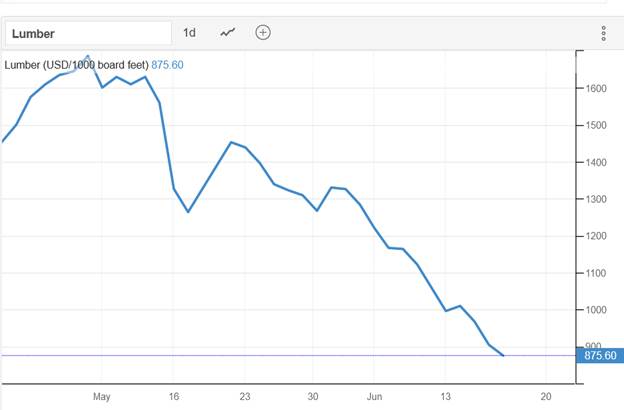 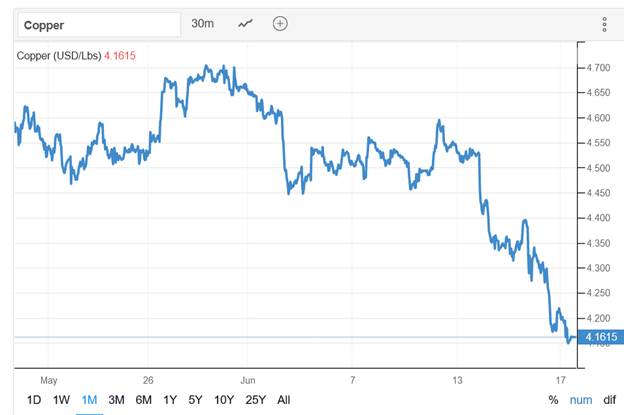 Of course, having interest rates this low are completely ridiculous. The Atlanta Fed GDP estimate for Q2 real economic growth is 10.3%--estimate as of June 16, 2021.  When you add Consumer Price Inflation into the calculation, you get 15.5% nominal GDP growth. Now, what would you think an investor would require in a fixed income instrument offered by Uncle Sam going out 10 years when nominal growth is above 15%? Well, history dictates that it should be close to that 15% nominal GDP figure. But instead, Benchmark Treasuries offer just 1.5!

That is the most distorted and manipulated rate in the history of the United States, thanks to relentless central bank intervention. However, such a low relative yield could only exist if the current rate of growth and inflation is deemed to have peaked by whatever is left of the free market. Who are these players? For the most part, they are an elite group of individuals with massively deep pockets and access to the best information.

But still, the current inflationary environment is confounding many investors and most in the main stream financial media; who tend to just perform the exercise of linear extrapolation to predict the future.

So why are bond yields falling, along with key commodity prices, when the current data on growth and inflation are so strong? The answer is threefold. These savviest of investors understand that the bulk of government fiscal stimulus has passed. In fact, approximately 88% of the total amount earmarked for direct relief has already been disseminated, according to the IRS. Also, the Fed is on the precipice of winding down its humongous and record-setting $120 billion per month stimulus scheme. But perhaps the most important reason for the certainty we have that growth and inflation rates have peaked, is that this past pandemic-induced recession was anything but typical.

During most economic downturns, the economy goes through a period of sharp deleveraging. But the exact opposite occurred during the COVID-19 recession. Total debt, both public and private, has now soared to just below $80 trillion, which is now 380% of GDP. The previous cycle-high was 370%, which occurred back in Q2 2009—at the nadir of the Great Recession. And debt is still being piled on. Household debt totaled $16.9 trillion for the 1st quarter of this year. It soared at a 6.5% annual rate, which was the fastest pace of debt growth since 2006.

The fact is, the economy was late-cycle prior to the pandemic, and has simply returned to late- cycle once again. Meaning, there has been no deleveraging of the corporate or consumer balance sheets, as is the usual case at the end of a recession and the start of a new business cycle. Debt levels have increased significantly across the board--especially at the Federal government level. The US economy was debt-disabled prior to the pandemic and it will be even more so ex post. An economy with a debt to GDP ratio near 400% just can’t grow quickly and will experience low inflation--that is, of course, unless and until the currency plummets and causes interest rates to soar.

Not only this, but there has been absolutely zero reconciliation of asset prices this time around. In an ordinary recession, asset prices are sold as debt is paid off. In this case, real estate, equities and bond prices are trading at all-time record-highs. Hence, the economy should soon return to its pre-pandemic late business cycle conditions of below trend growth and inflation, with the most dangerous and deflationary asset price correction in history still ahead.

Mr. Powell and his merry band of money printers at the Fed recently wrapped up the June FOMC meeting. After aggressively courting inflation for years, they have finally received satisfaction. But they now want to spurn it--happily, in my opinion. Hence, they pulled forward the dot-plot to indicate 2 rate hikes by the end of 2023. And, during Powell’s press conference he indicated the tapering talks have begun. However, the 10-year Note still was anchored around 1.5% despite the more hawkish fed.

Here’s a glimpse of what lies ahead for the market: by the second quarter of 2022, which is only 3 quarters away now. The year over year rate of change in growth and inflation will not just be slowing down, it should be plunging. At the same time, as mentioned already, virtually all the fiscal stimulus will be over and done. No more expanded child income tax credits, no more stimulus checks, enhanced unemployment will have ended, student loan/mortgage and rental forbearance will have expired. And, the Fed won’t just be talking about tapering, it will be in the middle of eliminating its $120 billion per month bond-buying scheme.

In other words, the credit markets should be freezing up and the stock market should be plunging from record high valuations by that time. Today’s Fed decision expedited the timeline for that chaos to begin. The buy and hold portfolio is a danger to your retirement’s health. the time to get into a dynamically-managed strategy in now.