Dialing back the Fed fears for now

S&P 500 extended gains as the Powell testimony calmed the markets that the punch bowl isn't going away "any day now" - that urgent it might have felt to some given the post-FOMC hit first to precious metals, and then to select commodities with stocks. If the dollar is getting second thoughts about buying into the hawkish Fed (at least a little), then Treasuries certainly are.

And it's the performance of value stocks that's signalling a certain paring of the tightening bets. While reflation or inflation trades aren't over, value is still set to underperform tech, and only select sectors are to rejoin its stock market leadership. Yes, the market breadth is going to widen as stock bull run is far from over, and what we have seen (despite the special alarm bells attached), is a run of the mill shallow correction. That's what bull markets do, they climb a wall of worry. Open profits are growing.

So, we got a preview of what a true tightening attempt could look like at its earliest stages, and at the same time the Powell pledge not to raise rates unless the recovery is complete, so to say. So as not to disturb the the job market recovery, assuring us at the same time that 1970s stagflation isn't on the horizon. For now, it indeed isn't as economic growth is still running faster than (current) inflation, which means that any growth scare is far down the road. Yet, the no stagflation assurances smack of this inflation narrative progression, so a healthy dose of suspicion is well placed. It's my view that the inflation expectations jawboning bought the central bank just a little time before the inflation trades regain traction. The Fed simply doesn't appear to want to act decisively.

With more taper discussions deferred to Jackson Hole, the best the Fed can do now, is to attempt to reinterpret the meaning of the word transitory – and that's exactly what Bostic is already doing. Suddenly, the phase of higher inflation won't be less than 3 months as originally expected, but perhaps 2 to 3 quarters. That's a world of difference!

Gold and silver are bound to like this shift in meanings, and market based inflation expectations are starting to see through that language. Even though miners and miners to gold ratio aren't marking such a turning point yet, the wait and see posture is there already. Given the commodity moves (CRB not too far from prior highs already, copper recovering from its bearish overshoot, oil stubbornly extending gains little by little), silver is likely to lead gold during the next meaningful upswing. For now, basing isn't over just yet – but the below Fed posture will come back to haunt it as much as opting to focus on PCE deflator (taken to extremes, you downgrade from a steak to a hamburger to what next? Cat or dog food?):

(…) In short, the Fed played the dot plot perceptions game which amounts to no serious attempt to nip inflation in the bud. The markets (precious metals, commodities) got thrown off prior trends, but will see through the bluff that can't be followed by actions. The inflation trades (and by extension modest rise in yields as we drift towards 2.50% on the 10-year before that tapering actually starts, with positive consequences for financials and cyclicals) haven't been killed off, and will reassert themselves when the markets test the Fed (and they will). To be clear, I am calling for persistently elevated (not hyper) inflation (PCE deflator readings coming soon) with the 10-year yield reverting to its more usual trading range – so essential to financial repression reducing the real value of all obligations.

Crude oil welcomes the current tightening perceptions reprieve, and the oil sector is running ahead in the anticipated stock market breadth broadening. Steep downswings aren't favored, and black gold would suffer only should the Fed turn genuinely hawkish, which they objectively can't do now. So, more oil profits are ahead.

Cryptos have rebounded after the 30,000 support in Bitcoin held on a closing basis. It's up to the bulls now to prove that the washout marks the start of accumulation as favored by the weekly charts.

Gold and miners are holding on to the recent lows, giving impression of being about to peek higher as the Fed noises die down for now.

Silver hasn't yet gotten its mojo back but the copper to 10-year yield ratio suggests an upswing attempt isn't that far away. 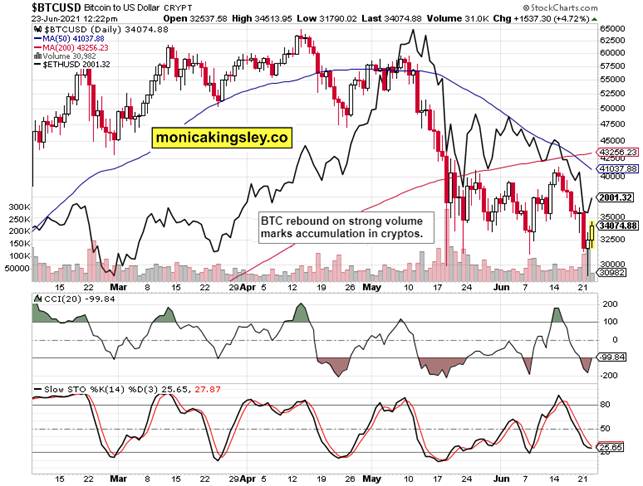 Local bottom looks to be in place, and the bulls need to defend current levels as a very minimum in order to keep in the game.

S&P 500 looks ready to consolidate and extend gains, with Nasdaq still in the driving seat.

Gold and silver upswing attempt is coming next as in Fed hawkishness gets duly reassessed. Even though miners don't favor much lasting success currently, the base building before renewed push higher (above $1,820) is underway.

Crude oil looks likely to extend gains thanks to reflation, and money is flowing back into commodities now that the Fed is reinterpreting the "context of tightening and transitory".

Bitcoin and Ethereum have staved off further downside for now, but the bulls would need to break above 44,000 minimum in Bitcoin so as to regain bull market momentum. That's tall order for now.

Thank you for having read today's free analysis, which is available in full at my homesite – and includes the stock market and oil parts too. There, you can subscribe to the free Monica's Insider Club , which features real-time trade calls and intraday updates for all the four publications: Stock Trading Signals, Gold Trading Signals, Oil Trading Signals and Bitcoin Trading Signals.