S&P 500 keeps powering to new highs, and little wonder – thanks to the infrastructure stimulus euphoria. The return of (at least some) strength into value stocks at expense of tech outside $NYFANG, clearly marks the risk-on shift as much as credit markets do.

And what about the much awaited PCE deflator data? The figure aligned with the inflation camp much better, yet the marketplace arguably expects better inflation data ahead - the transitory inflation thesis is the mainstream one, but I'm still of the opinion that inflation wouldn't decline as meaningfully, especially when measured through CPI, PPI, and import-export prices, proving more persistent than generally appreciated.

Markets' inflation optimism can be seen in the relatively muted Treasury yields increase. If they were worried as much as before, the spike would have been larger, but we're well into the summer lull in the bond markets I announced back in May, with yields rising again in autumn – gradually moving well beyond 2% on the 10-year yield.

Contrast the modest yields increase with financials rising, real estate consolidating, and you'll come to the conclusion that the path of least resistance for the S&P 500 is still higher. Tech is unlikely to be derailed – and hasn't been as value continued its recovery. VIX keeps pushing for new lows, making consecutive series of lower highs, and I also remarked on Friday about the option traders:

(…) Depending on tech heavyweights for the lion's share of gains isn't though an immediate concern – the market breadth is slowly improving after value stocks were bombed out post-FOMC. Signs of life are returning, facilitated by the Fed's $8.1T and growing reasons to celebrate, so don't be spooked by too many lower knots in VIX when there is no panic in the options arena either.

PCE deflator ... is favorable to the Fed as it defers the taper speculation further to the future. Together with the redefinition of how long transitory used to last earlier, and what transitory (inflation) means now, the central bank wins in leaving the punch bowl available for longer (the job market offers plenty of excuses too).

As we have to square hawkish-turned-dovish Fed talk with growing monetary (and fiscal) support, the biggest risk would be a hawkish miscalculation. Certainly the evolving position on inflation at the central bank is illustrative of deferring the problem to the future, for it to perhaps go away on its own as job market is talked instead. If only inflation expectations (be they TIP:TLT or RINF) cooperated… It looks to me the inflation trades are merely consolidating now before another upleg – CRB index has already erased all the post-FOMC plunge, with materials (XLB ETF) having much further to go before the damage there gets repaired too.

Gold and miners remain petrified for now, modestly resilient vs. the daily increase in nominal yields, and not reacting to the stubborn current inflation, let alone future one. Treasury yield spreads though show the markets aren't expecting inflation to run out of control. Even the red metal dipped on the positive inflation news, sending the copper to 10-year yield ratio to the bottom of its recent range. The explanation lies in the dollar resilience, keeping a lid on precious metals in the on-off tightening rhetoric, regardless of where real rates and TIPS are now and about to go.

Crude oil keeps though trending higher, offering brief dips that are all too fast reversed. The bullish outlook is on, and oil stocks paint a great future ahead – the associated volatility might not be always pleasant, but black gold is far from making a top..

Cryptos base building hypothesis still hasn't been invalidated, and the weekend rebound actually confirmed it. Steep upswing on high volume though is missing as much as moving back to the upper ranges of the post mid-May plunge.

Gold and miners still keep going nowhere – there is no momentary sign of strength, and actually creeping deterioration as also seen in the selling into GDX strength. Bigger move is coming – keep an eye on the miners.

Silver isn't yet leading gold, and the copper move was at odds with the 10-year Treasury yield one. Precious metals are obviously afraid of tightening, but they would be led by real assets (commodities including copper) in readjusting to the current MMT on steroids still reality. 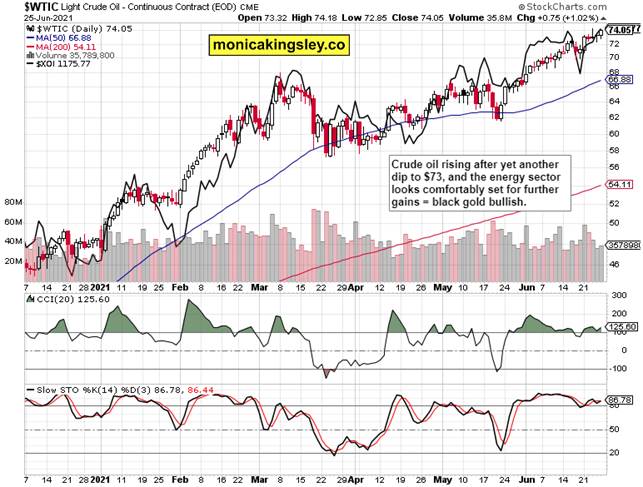 S&P 500 keeps reaching higher as value is coming back to life, and Nasdaq consolidates – yet another rotation in the ongoing bull market.

Gold and silver short-term bullish momentum is absent, miners are weak, and the dollar upswing risk can't be overlooked – precious metals are ignoring real rates and inflation at the moment, and are still basing.

Crude oil seesaw ended shortly after Friday's open, and the consolidation has indeed been resolved with higher prices, supported by rising oil equities.

Bitcoin and Ethereum are no longer hanging by a thread, but need to approach the upper border of their recent range to improve their short-term outlook noticeably.

Thank you for having read today's free analysis, which is available in full at my homesite. There, you can subscribe to the free Monica's Insider Club , which features real-time trade calls and intraday updates for all the four publications: Stock Trading Signals, Gold Trading Signals, Oil Trading Signals and Bitcoin Trading Signals.