USDX, gold: the hunter and the prey

Just before the hunt begins, the hunter needs to be sure its prey feels safe. Will we see a promising short-term rally in gold?

After the USD Index reasserted its dominance once again, its bellowing howl sent shivers down the spine of currency traders. When the U.S. Dollar Index is on the hunt, the precious metals are often its prey. The alpha wolf is poised to lead the pack over the medium term, and the sheep will likely be sent to the slaughter, but the predator needs to gather force first; a peaceful period of prosperity should ensue over the next several days. And this short-term decline could help uplift gold, silver, and mining stocks.

To explain, I warned last week that a short-term decline was likely after the USD Index’s RSI (Relative Strength Index) jumped above 70. And after eliciting some weakness, another pullback to the 38.2% Fibonacci retracement level also aligns with the price action that we witnessed in 2016. 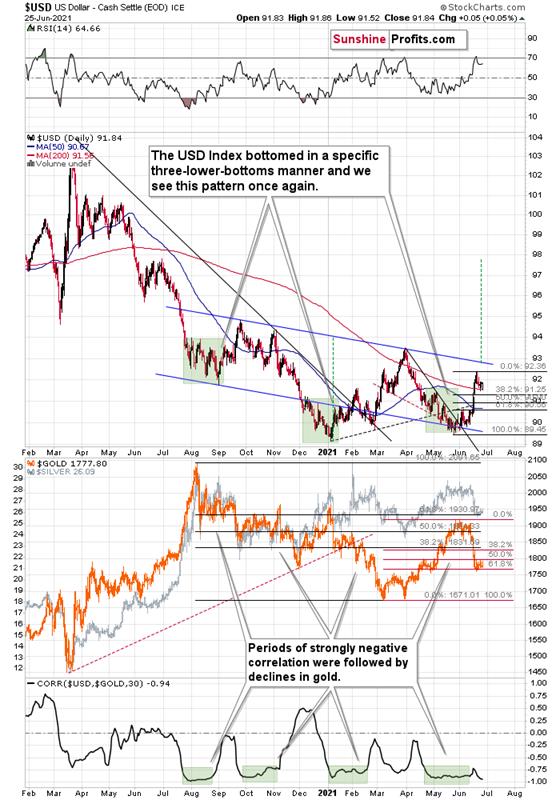 To that point, after the USD Index broke above its short-term declining resistance line in 2016, it followed that up by retreating a bit below its rising support (dashed) line and then consolidated for about a month before rallying sharply. In the process, the USD Index corrected to approximately its 38.2% Fibonacci retracement level before rallying once again (in fact, it moved slightly below it). For context, there was also a huge intraday reversal in the following days, but it was an event-driven one (it was when Donald Trump won the elections), so it’s unlikely to be repeated. As of today, with the 38.2% Fibonacci retracement level at about 91.3, the USDX could bottom close to this level. Now, this might not seem like a big deal, but it becomes quite important once one considers what happened in gold during the final part of the move to the 38.2% retracement in 2016. That was when gold made most of its gains.

However, given the yellow metal’s inability to bounce after its profound decline, the forthcoming rally will likely be weaker than originally expected. For context, the initial projection was based on the similarity to gold’s behavior in 2012. However, with the yellow metal struck in neutral and failing to gain any traction, the current environment seems more bearish than it was in 2012. The bearish gold price forecasts currently seem justified , in the medium term.

Moreover, if the USD Index can surpass 93, the greenback will complete its inverse head & shoulders pattern, and the milestone implies a short-term target of roughly 98.

Let’s keep in mind that the near-term decline in the USD Index is likely to be small – and nothing more than a blip on the radar screen, when viewed from the long-term point of view. The USD Index often records material upswings during the middle of the year. If you analyze the chart below, you can see that summertime surges have been mainstays on the USD Index’s historical record. Likewise, double bottoms often signal the end of major declines and often ignite significant rallies. For example, in 2004, 2005, 2008, 2011, 2014 and 2018, a retest of the lows (or close to them) occurred before the USD Index began its upward flights. In addition, back in 2008, U.S. equities’ plight added even more wind to the USD Index’s sails. And if the general stock market suffers another profound decline (along with gold miners and silver ), a sharp re-rating of the USDX is likely in the cards.

Please see below (quick reminder: you can click on the chart to enlarge it): 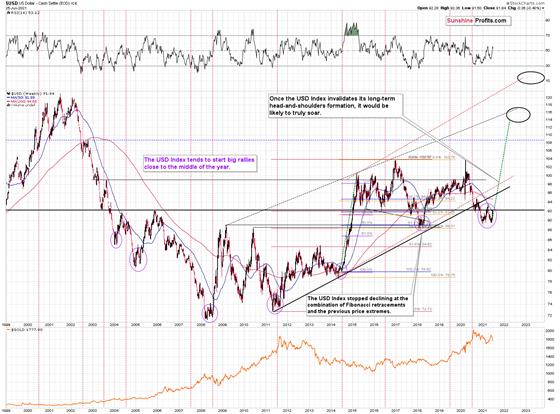 If that wasn’t enough, the thesis is also supported by the USD Index’s long-term chart. To explain, the USDX’s long-term breakout remains intact, and if we steady the binoculars, the greenback’s uptrend is clearly in place. 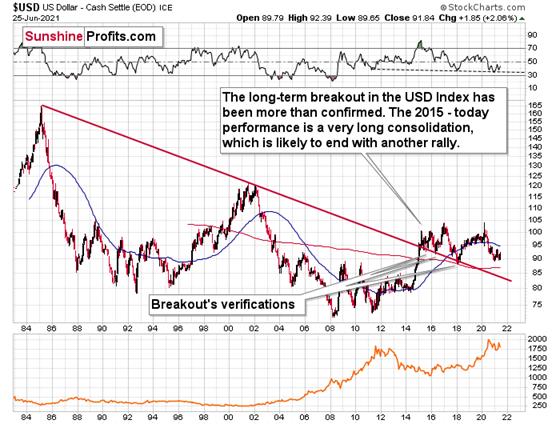 Moving on to the Euro Index, the recent symmetrical decline mirrors the drawdown that we witnessed in mid-2020. And if the Euro Index breaks below the neckline of its bearish head & shoulders pattern, the slide could be fast and furious. For context, completion of the right shoulder signals a decline to (roughly) the June 2020 lows or even lower. However, with a short-term corrective downswing in the USD Index likely to usher the Euro Index higher, the development should help support gold, silver, and mining stocks this week. 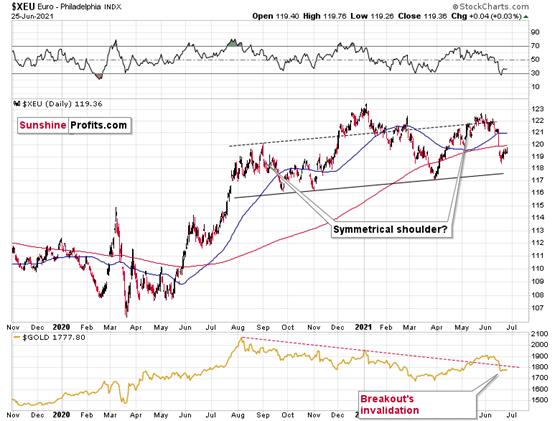 For context, I wrote previously:

The completion of the masterpiece could have a profound impact on gold, silver and mining stocks. To explain, gold continues to underperform the euro. If you analyze the bottom half of the chart above, you can see that material upswings in the Euro Index have resulted in diminishing marginal returns for the yellow metal. Thus, the relative weakness is an ominous sign. That’s another point for the bearish price prediction for gold.

Circling back to the 2016 analogue, the USD Index has already hopped into the time machine. And with the flashback eliciting memories of past glory, a reenactment won’t be applauded by the PMs. 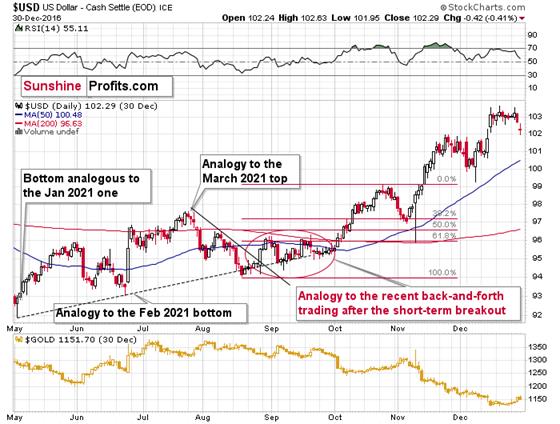 As you can see on the above chart, what we saw this year was quite similar to what happened in 2016. The analogy that I described previously worked just like in the past. Namely, the back-and-forth movement after the breakout was followed by a quick rally.

Once the momentum unfolds , ~94.5 is likely the USD Index’s first stop. In the months to follow, the USDX will likely exceed 100 at some point over the medium or long term. Keep in mind though: we’re not bullish on the greenback because of the U.S.’ absolute outperformance. It’s because the region is outperforming the Eurozone and the EUR/USD accounts for nearly 58% of the movement of the USD Index – the relative performance is what really matters .

In conclusion, while wolves will likely circle gold, silver and mining stocks over the medium term, the leader of the pack – the USD Index – is well-fed for now and shouldn’t disrupt the precious metals’ short-term corrective upswing. However, when its stomach growls and the hunt continues, the alpha’s bared teeth, fixed stare, and horizontal ears may scare gold, silver and mining stocks to death. Thus, while the precious metals are likely safe in the short term, the nights might grow colder and darker even amid the summer sun.

Thank you for reading our free analysis today. Please note that the above is just a small fraction of today’s all-encompassing Gold & Silver Trading Alert. The latter includes multiple premium details such as the targets for gold and mining stocks that could be reached in the next few weeks. If you’d like to read those premium details, we have good news for you. As soon as you sign up for our free gold newsletter, you’ll get a free 7-day no-obligation trial access to our premium Gold & Silver Trading Alerts. It’s really free – sign up today.