“Ball of confusion, oh yeah, that’s what the world is today”
– The Temptations

The nebulousness of the monetary policy of the Federal Reserve in regards to inflation and the timeline to taper and raise rates weighs heavily on trader’s and market participants’ minds.

Today MarketWatch reported that Ricardo Evangelista, senior analyst at ActivTrades, had written, “The markets appear increasingly unsettled by the Fed’s taboo on inflation, with a growing number of investors taking a net view that the central bank’s ambiguity, mixing a new hawkish stance with dovish declarations from some officials, will ultimately translate into higher interest rates sooner than previously expected.” Furthermore, he said, “Such a scenario will underpin the dollar and provide more turbulence for bullion, which could “therefore, generate more short-term losses for gold.”

The primary issue is whether or not the recent uptick in inflation is largely transitory or sustainable. The Fed maintains that a large percentage of the current hot (high) inflationary rate is transitory, citing supply chain issues and employment issues as businesses reopen in the United States. While it is obvious that upticks in inflation that have resulted supply chain shortages such as from higher new and used cars prices are due to microchips sortages are temporary, higher pricing in energy and food costs most certainly could be longer-lasting.

The PCE (Personal Consumption Expenditures Price Index) is currently at 3.9% (the Federal Reserve’s price index used to determine the current inflation rate) almost double the 2% target of the Federal Reserve. The Federal Reserve has said that they will let inflation run hot. However, it is well above their current acceptable (hot) levels of between 2% and 3% annually. It must be noted that this index strips out both energy and food costs.

A more realistic gauge of current inflation is the CPI (Consumer Price Index) which is now at 5%, as of last month. This index measures the average change over time in the price paid by urban consumers for a market basket of consumer goods and services which includes both energy and food costs.

That being said, gold prices remain under strong pressure as market participants are active sellers as yields for government debt instruments have seen an increase. Increased yields along with dollar strength were contributing factors to lower pricing in gold today. 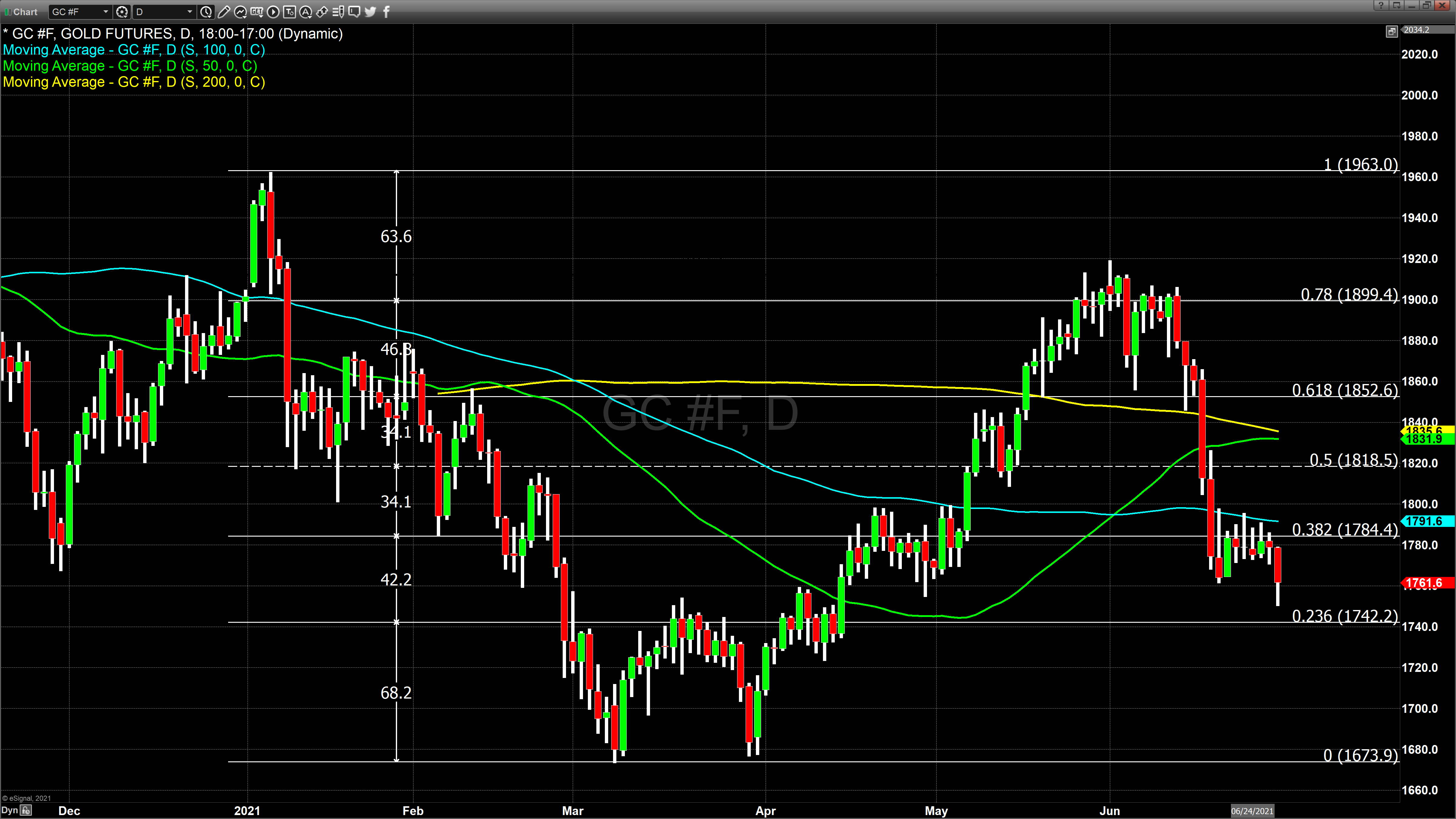 Gold basis the most active August 2021 Comex contract loss $19.10 today and is currently fixed at $1761.60. There was no major chart damage as a result of today’s decline, most likely because major chart damage has already occurred.

The key to the future direction of gold will be Friday’s jobs report by the U.S. labor department. Currently, economic forecasts run between 690,000 and 700,000 new jobs being added last month. If the actual numbers come in close or above the economic forecasts it could put continued pressure on gold. This could take gold to the next major support level which occurs at $1740. This support level is based upon a Fibonacci retracement which begins at the highs achieved in gold at the beginning of 2021 at $1963 down to the lows of March 2021 when gold traded to $1673 per ounce.