Continued pressure from exceedingly strong U.S. equities markets coupled with dollar strength has curtailed any continuation of the momentum created from the most recent rally. Gold hit an intraday low on June 29 of approximately $1750 and then traded higher for the next five consecutive trading days. This took gold futures above their 100-day moving average, which is currently fixed at $1789.80, before forming a base and trading sideways just above $1800 per ounce.

As of 4:50 PM EST gold futures basis, the most active Comex contract is currently down four dollars at $1806 per ounce. This is a net change of - 0.22%. Dollar strength was a partial contributor to today's modest decline. The dollar index is currently up +0.13%, a gain of 12 points, and fixed at 92.235. This indicates that roughly half of today's price decline in gold can be attributed to dollar strength. However, it was the continuation of an exceptionally strong U.S. equities market that pulled investment capital away from the safe-haven asset and into the risk-on asset class. 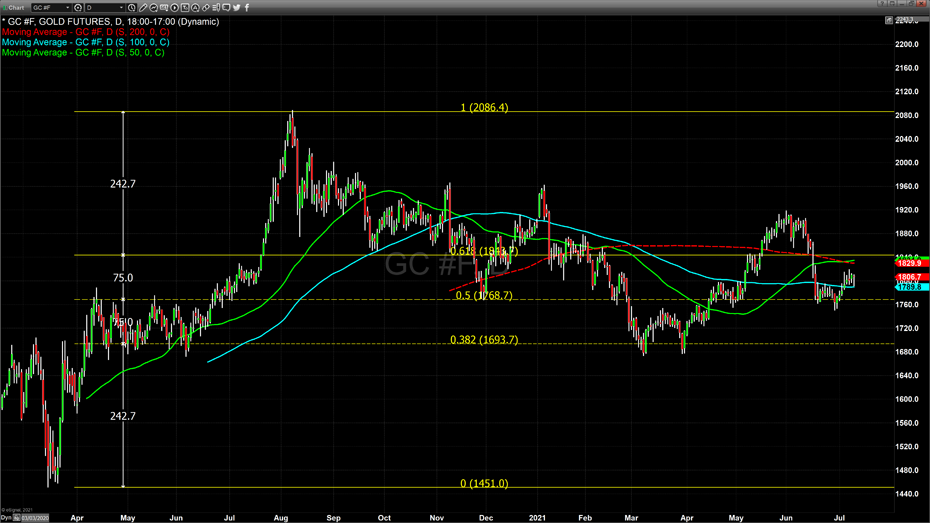 Gold has traded from $1750 per ounce to an intraday high last Thursday of $1819. Some analysts believe that this most recent pullback is simply profit-taking following the most recent run-up in gold of approximately $70.

The key elements that market participants are focusing upon are the direction of interest rates as well as any potential retracement from recent gains in the U.S. equities markets. The U.S. 10-year notes have seen diminishing yields which are currently fixed at 1.373%, and the 30-year Treasury bond fixed at 2.002%. Current yields are at their lowest point since February of this year.

In an exclusive interview today with Bloomberg news, the European Central Bank President, Christine Lagarde, was asked if it was time to begin to look at rolling back some of the recent accommodative monetary policies, in which she quickly answered, "This is not the time to consider that."

However, it was reported by Reuters today that the European Central Bank will chart a new policy path at its next meeting to reflect its change in strategy and how to show it is serious about reviving inflation. Last week the ECB announced a new strategy similar to that of the Federal Reserve to tolerate letting inflation run hotter above its 2% goal when interest rates are near zero as they are now.

Reuters reported that "This is meant to reassure investors that policy will not be tightened prematurely and cement their expectations about price growth, which has lagged below the ECB's target for most of the past decade."

The Federal Reserve Chairman Jerome Powell will speak to Congress this week with an update on the Fed's current monetary policy. According to CNBC, a "part of his task will be selling the Fed's still easy policies in the wake of a strong economy and surging inflation." Powell continues to be steadfast that the current accommodative monetary policy will remain fully intact until "substantial further progress" is made towards the Fed employment and inflation goals.

Chairman Powell's difficult task will be to convince Congress that it is necessary to maintain its current dovish monetary policy in light of the fact that U.S. equities continue to rise and GDP continues to strengthen. With inflationary pressures at the highest level they have been at in eight years and a surge in housing prices, this could be a hard sell at best.

The fact that both the ECB and the Federal Reserve have collectively continued to promote their accommodative stance could be the underlying impetus needed to move gold to higher pricing.