Let's begin with this from the "History Repeats Itself Dept." by having a look at the above Gold Scoreboard. See what we're seein'? (Hint: 'tis in the Gold Weekly panel...)

"That this has been a seasonally positive period for price, mmb?"

True enough, Squire, (save for back in 2018). But: in this year and last year, price for each of the past four weeks has settled at the like level, (which for you WestPalmBeachers down there means the 2021 Gold line is on top of the 2020 Yellow line). Were such likeness to continue, Gold would revisit its All-Time High (2089) in four weeks' time. We're not exactly holding our breath for such, but we like that at which we're lookin'.

In fact, barely had the ink dried a week ago in writing "...we're anticipating that this new Short trend shall be short-lived..." with respect to the following (updated) chart of Gold's weekly bars... 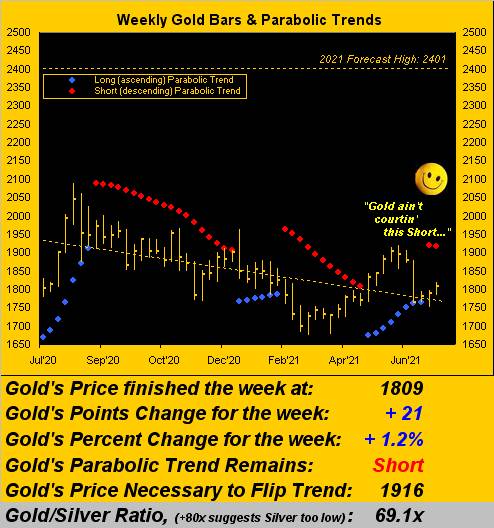 We love it when that happens. Such "BUY" signal last flashed this past 12 March (price then 1727) from which come 21 April we found Gold 71 points higher (+4.1%) at 1798. A like percentage repeat of that from Gold's settle yesterday (Friday) at 1809 would find Gold at 1883 in some five week's time: not the aforementioned All-Time High level, mind you, but nonetheless knocking on the door of 1900, and by then likely flipping the weekly parabolic trend back to Long.

As for such current parabolic Short trend only having just triggered, we responded mid-week to a query from a valued new reader that we see: "...this case [as] more of an opportunity to buy on weakness..." And we're now certainly seeing upside push rather than price falling on its tush: for Gold has settled higher in six of the past seven trading days. (Further for those of you lucky enough to be scoring at home, across the past 20 years upon Gold being up six times in seven days, the median price rise in the ensuing 21 trading days is +3.5%, again a case for the upper 1800s near-term). Got Gold?

Let's next get a look at Gold's daily settles across the past 10 years vis-à-vis the stalwart 300-day moving average. Of late, price and average are performing a precious pas-de-deux within an overall positive path:

Here's something else that also is Gold-positive -- even as "everyone" is expecting an elevating economy -- for which we've ad nausea put forth "has already happened". In last week's graphic of the falling Economic Barometer, 'twas embedded that "Nobody sees it comin'..." Now a week on, 'tis further morphing from a fall into a plunge.

To be sure, this past week wasn't that busy with incoming EconData, but of note: the Institute for Supply Management's Services Index for June dropped from 64 to 61, its worst dump since the April 2020 COVID shutdown; weekly Initial Jobless Claims were worse than consensus and worse than those of the prior week, the latter being revised to even worse; and May's Wholesale Inventories backed up, indicative of stuff not moving combined May's Dollar weakness. Got Gold? Here's the Baro, for which 16 metrics are due next week, and for the S&P (red line) is the beginning of banks' Q2 earnings reports:

Thus we again query: "Has the S&P crashed yet?"

No. Instead it is relentlessly making all-time highs. Indeed of the 130 trading days year-to-date, 38 (29%) have closed at an all-time high, including nine in the last eleven during which stint the Econ Baro has dropped like a stone. ('Course that shan't be on your FinTV given negative news breeds channel changing ... and down go the ratings). Oh to be sure, we expect Q2 Earnings Season to be a vast improvement over that of a year ago; but hardly to where bottom lines double, let alone triple, such as to rightly drive the S&P 500's price/earnings ratio down toward a historically rational 20x from our present "live" reading of an inane 56.5x.

Moreover, we thought "the market" isn't supposed to take kindly to Federal Reserve uncertainty. Whilst the FedFolks are talking sooner taper, the minutes from the Federal Open Market Committee's 15-16 June meeting appear to stress patience. (One can only suppose that if the Fed is not patient, 'twill mar their reputation for "behind the curve". Can't have that. Can't blame the Fed).

Meanwhile, the European Central Bank is reducing their inflation expectation even as the economic recovery out of COVID (for the moment) is at this century's best pace. Stating last weekend that there is no cause for an inflation alarm was Poland's central bank governor Adam "Always Glad" Glapinski. We'll see.

Now let's see the reason for the Gold "BUY" signal as noted earlier. 'Tis there below on the left in Gold's daily bars from three months ago-to-date wherein the "Baby Blues" of trend consistency bolted above their -80% axis. Gold's 10-day Market Profile on the right highlights 1778 and 1806 as the two most heavily traded prices across the past fortnight, and thus are considered support:

With the like graphic for Silver, her "Baby Blues" never quite eclipsed the -80% axis, although her most recent drive has not matched Gold's strive. As you well know, the albatross 'round Sister Silver's neck is that she is treated at times as an industrial metal rather than as pure money, such that with Copper basically in decline and Oil's uptrend now running out of puff, precious metal Silver is feeling a wee bit of pressure:

To close, you may have noted that May's Consumer Credit level significantly grew some 77% over that for April, its fourth largest leap since the start of COVID. But then we read that ironically Wells Fargo ("Since 1852!") is said to be "shuttering" the entirety of its personal credit lines. We just checked to note that we still hold an available undrawn WF credit card. We're thus wondering if we ought fully draw it prior to its being "shuttered" ... (after which we shan't have to repay it?) ... and get a little more Gold!