The news hitting the market is clouding the precious metals outlook – higher U.S. Treasuries and a hawkish FED are turning into a dangerous concoction.

Running Out of Excuses

With investors' attention span rivaling that of a young child, the inflationary carousel has gone from hot to cold and to hot once again. For example, after short-covering, the Delta variant and the FED's hawkish shift dropped the guillotine on the U.S. 10-Year Treasury yield, the long-term benchmark languished in defeat. However, with inflation's reincarnation once again shifting the narrative, I warned on Jul. 9 that investors are still underestimating the inflationary fervor.

With the Consumer Price Index (CPI) scheduled for release on Jul. 13, another dose of reality could be forthcoming. Case in point: with the Commodity Producer Price Index (PPI) surging by 18.98% year-over-year (YoY) in May – the highest YoY percentage increase since 1974 – the print implies a roughly 5% to 5.5% YoY increase in the headline CPI. To explain, when the commodity PPI increased by 17.4% YoY in July 2008, the headline CPI rose by 5.3% in August. Thus, with the commodity PPI surging by 18.98% in May, all signs point to another 'surprising' headline CPI print for June. 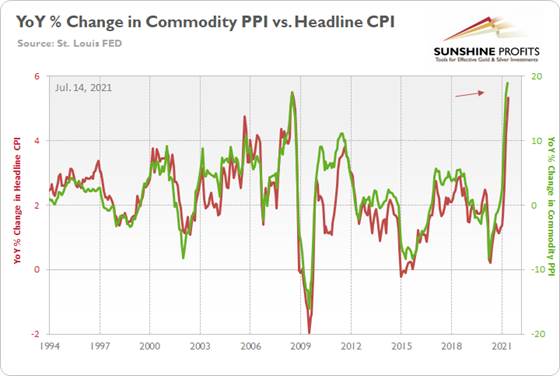 Likewise, while investors comb through the print and search for aberrations that support their outlook, they're missing the most important link. For example, with the Used Cars and Trucks CPI surging by 45.2% YoY in June, disbelievers suggest that once the outlier recedes, it will quell the inflationary momentum. For context, I've been warning since April that the Manheim Used Vehicle Index signaled a profound jump in the Used Cars and Trucks CPI.

Despite that, while investors lament the obvious (of course the Used Cars and Trucks CPI will decelerate in the coming months), the commodity PPI is still the most important indicator of where the inflation story is headed next. 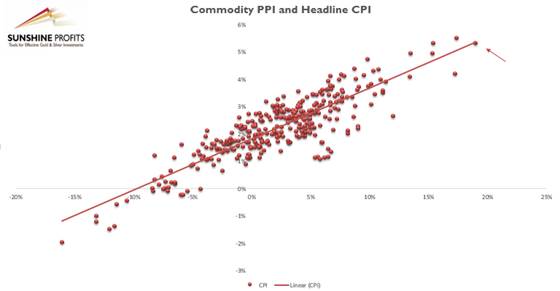 The Economy Growing… Too Much?

Furthermore, while the Used Cars and Trucks CPI is poised to slow over the medium term, I warned on Jun. 3 that rent inflation could easily take its place. For context, the Shelter CPI accounts for more than 30% of the movement of the headline CPI. And with The Federal National Mortgage Association (Fannie Mae) projecting that the Shelter CPI will increase from "2.0%annualized to about 4.5%"and "last through at least 2022,"the "'transitory' increases to the rate of overall inflation may be more prolonged than many are expecting."

Likewise, with inflation surging and the U.S. Federal Reserve (FED) pouring gasoline on the fire, St. Louis FED President James Bullard told the Wall Street Journal (WSJ) on Jul. 12 (released on Jul. 13) that "I am a little bit concerned that we're feeding into an incipient housing bubble ... [and] I think we don't need to be doing that with the economy growing at 7%." 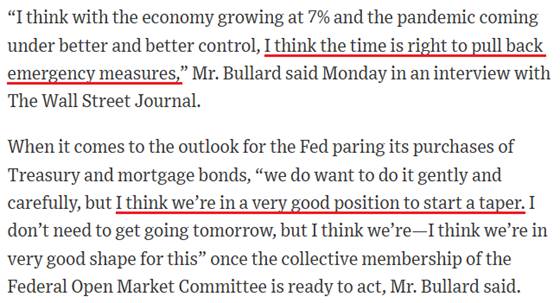 In addition, Conagra Brands CEO Sean Connolly also warned on Jul. 13 that "this is an atypical level of inflation [and] it's the highest inflation level our company has seen in as many years as we can remember."For context, Conagra Brands is an American food manufacturer and is home to well-known brands such as Marie Callender's, Healthy Choice and Slim Jim.

If that wasn't enough, JPMorgan CEO Jamie Dimon was asked during the company's Q2 earnings call on Jul. 13 about how the current recovery compares to the recovery following the global financial crisis (GFC). He responded:

"I think they're completely different fundamentally…. The consumer, their house value is up, their stock rises up, their incomes are up, their savings are up, their confidence are up. The pandemic is kind of in the rearview mirror. Hopefully, nothing gets worse with it. And they're ready to go."

"Jobs are plentiful, wages are going up. These are all good things. And so, obviously, if the inflation can be worse than people think, I think it will be a little bit worse with these kinds of things. I don't think it's all temporary, but that doesn't matter if we have very strong growth."

Even more revealing, while Dimon said that he's "not predicting" that the U.S. 10-Year Treasury yield "goes to 3%,"he mentioned that "you may have growth in the second half this year [that's] stronger than it's ever been in the United States of America."Furthermore, CFO Jeremy Barnum said that the largest bank in the U.S. is putting its money where its mouth is and that's why the cash on its balance sheet has not been invested in U.S. Treasuries.

Finally, with the Chicago FED releasing its Survey of Business Conditions (CFSBC) on Jul. 13, its labor cost index is now at an all-time high and its non-labor cost index remains materially elevated. Thus, the FED is running out of excuses for not scaling back its bond-buying program.

In conclusion, the PMs continue to hope for a bullish catalyst, but the news hitting the market is clouding their outlook. While conventional wisdom suggests that surging inflation is bullish for the gold, silver, and mining stocks, the cocktail of higher U.S. Treasury yields and a hawkish FED more than offsets the optimistic long-term argument. As a result, while the PMs may generate short-term bursts of strength, and their very long-term outlook remains favorable, their medium-term outlook is extremely ominous. With the USD Index gunning for 93, and surging inflation likely to force the FED's hand, a September taper is unlikely to elicit a positive response from the metals.