Equities investors focus on inflation, while gold investors seem to ignore it

It seems, at least for today, equities traders are focusing upon rising inflation, while gold traders are largely ignoring the recent data. This is the polar opposite of what we have seen throughout the week, with equity investors largely ignoring the historically high CPI data (Consumer Price Index) that was released earlier this week by the U.S. Bureau of Labor Statistics. The report indicated that consumer prices in the United States had the greatest increase since 2008. It also came in well above forecasts from economists polled by the Wall Street Journal. The forecast had expectations that inflation for last month would raise approximately .5%, the actual numbers came in almost double the estimate at .9%. This takes the annual inflation rate vis-à-vis the CPI .5.4%.

The CPI differs from the PCE in that it includes food and energy costs. The PCE is the preferred index by the Federal Reserve. That index strips out food and energy costs. That being said, the PCE index is currently at an annual rate of 3.4%, which is well above the former target of the Federal Reserve at 2%. The Federal Reserve has long held a dual mandate of full employment and inflation at 2%. However, as the economy restarts in the United States, they have shifted their focus to full employment while letting inflation run hotter to achieve this goal.

In a statement made by Chairman Jerome Powell during his testimony before the House Financial Services panel this week, he acknowledged that not only is inflation running higher than the Federal Reserve anticipated but added that "Inflation …will likely remain elevated in coming months before moderating."

Many market participants were concerned that the higher inflationary numbers would lead to action by the Federal Reserve to slow its dramatic rise. But during Chairman Powell's testimony, he said that it would be a "mistake" for the Fed to "act prematurely" to combat inflation that, in the end, should be transitory.

His statements this week resulted in higher prices in gold but were largely ignored by equity investors who continue to bid stocks higher resulting in the Dow, the NASDAQ Composite, and the S&P 500 all hitting record highs earlier in the week. That seemed to reversed today with equity traders bidding all three major indexes lower with inflationary concerns cited as a primary catalyst. 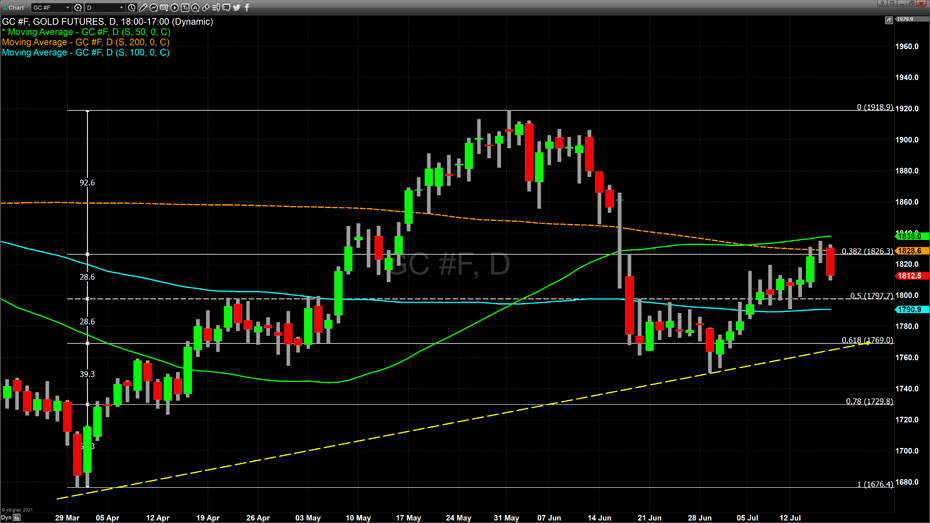 Given the recent gains through July in gold, it is not surprising that we see some profit-taking enter the market. While this could mark the beginning of a correction, it is not likely that we will see gold trade below $1800, and we also see major price support at $1790.90, which is gold's 100-day moving average.

Wishing you, as always, good trading and good health,
By Gary Wagner