A review of the situation in gold stocks

It is in essence a year ago that Warren Buffett ill-timed his entry into the gold stock sector, unwittingly calling a top to the post-crash rally and signaling the start of the 2020 inflation trades, which did not include gold stocks (for logical reasons, as belabored in NFTRH and at NFTRH.com over the years). Increasing the view that ole’ Warren was playing contrary indicator last summer were the usual gold perma-bull suspects coming out immediately after with bullhorns a blaring as we noted in real time on August 17, 2020: Buffett Buys a Gold Stock!

In the scope of the entire correction, as the bids rotated out of the precious metals and to a lesser degree growth/tech stocks into value stocks and cyclicals (including commodities) the inflation-instigated reflation trades hit stride and gold stocks were sent on a long decline. Again, if you tune out the perma-touts and think rationally, the miners were only doing what they should do (see below).

There were two false breakdowns, the second of which sparked a strong rally. We also caught Mr. Buffett for a contrary signal to that rally on February 17, 2021: Buffett Pukes a Gold Stock!

The rally terminated at a key resistance level (as plotted well ahead of time as a caution zone in NFTRH) and here we are with HUI below its down-turning SMA 50 and SMA 200 (which needed to hold as support in order to maintain a constructive view), back in the downtrend channel (actually the Handle to a still bullish big picture, which is beyond the scope of this post) and the near-term bounce that I had been expecting has finally arrived after the rude interruption of an unexpected lower low.

That low came off of positive RSI and MACD divergences and here we are, on the bounce with the channel’s upper line, the down-sloping moving averages and a clear lateral resistance area all taunting… “‘C’mon Huey, we dare you!” 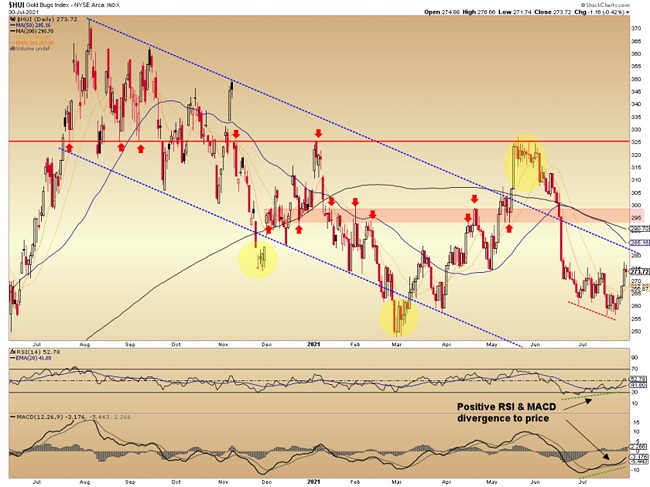 The reason I keep close watch on gold stocks is not due to a masochistic tendency but instead, it is due to the need for balance in a leveraged macro (for some compelling charts and data see this article highlighting Crescat Capital’s macro viewpoints). When the macro falls apart there will be a loss of liquidity and terrible stress on the inflated financial system and economy that it pumps. That would be counter-cyclicality the likes of which gold is made for. By extension, the miners would leverage that counter-cyclicality, fundamentally.

I am not your average gold bug (those who know me heard thinking aloud in unison ‘yeah, we know’) and NFTRH is not a gold bug rag; it’s a fully rounded financial market manager. When I hear inflation I think long and hard about the gold miners, and not in a positive way. My thesis boils down to this; if the gold stocks are going to rally during an overtly inflationary phase they will probably do it as part of a bubble, similar to the 2003-2008 period when all sorts of commodities, including mining cost input commodities and materials, out-performed the miners’ product, gold, and yet HUI rallied well over 300% to strenuous over-valuation.

With a positive in play for gold (not necessarily the miners) as Treasury yields remain below the inflation rate (i.e. real yields are negative) let’s review the still-poor sector and macro fundamental backdrop for gold miners. By ‘sector’ fundamental I mean directly affecting gold mining bottom line execution. By ‘macro’ fundamental I mean macro signaling that affects investors’ perception of gold stocks.

Macrocosm Status by the size (importance) of the planets

Here are some charts showing the status of gold’s ratios to positively correlated markets. A change can come about at any time but as you’ll see, said change has not yet come about and no amount of cheer leading or dogma dispensing will change that. 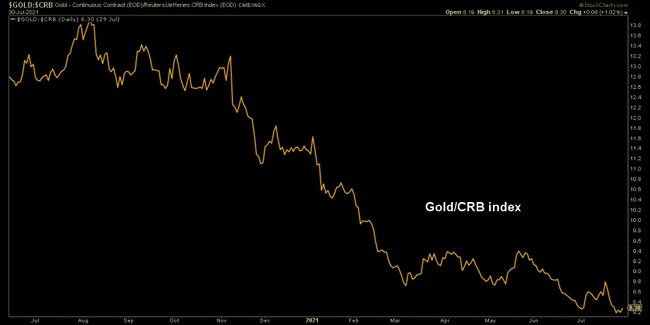 Gold/Oil (negative sector, as oil/energy are primary to mining costs) 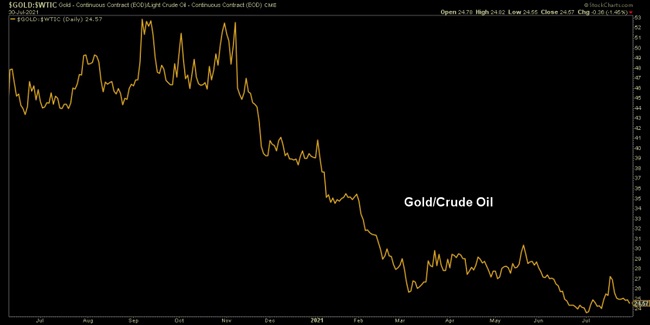 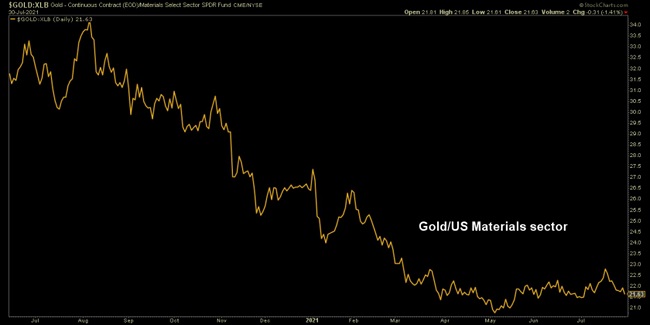 Gold/Industrial Metals (negative macro and insofar as these metals are used in mine construction/operation, sector to a lesser degree) 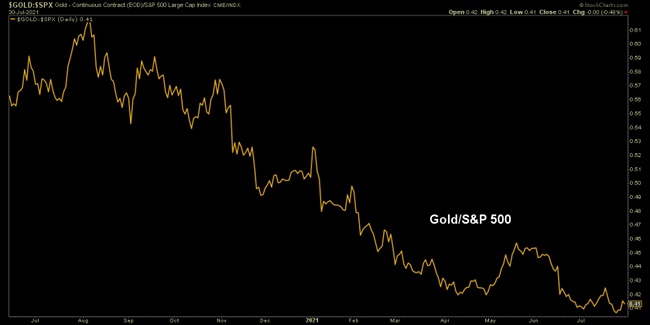 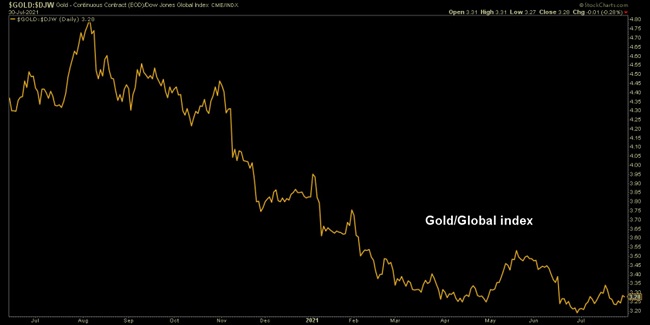 Important: The macro will turn.

Also important: The macro has not yet turned.

Of utmost importance: Patience, perspective and an ability to think for yourself, not be fed what you think by supposed experts.

Critically important: Have a nice weekend. ;-)
By Gary Tanashian