Since then, the precious metal has been in a correction phase that has seen it, along with gold miners, remain range-bound.

But that may be about to end.

All the fundamentals that pushed gold above the $2,000 mark are not only present, they’re more entrenched.  Inflation, ultra-low interest rates, government stimulus spending and, of course, the COVID-19 pandemic.

Now also we have the unresolved debt ceiling debate, along with a likely fourth pandemic wave, which should help put an even more solid floor underneath the gold price.

On top of all this, we have other indicators suggesting that gold and gold stocks, in the near term, could be set to run.

That makes now an opportune time to allocate to the gold mining sector in advance of broader recognition by the market.

If there is one chart that captures why the setup for gold is so bullish right now, then this would be it. 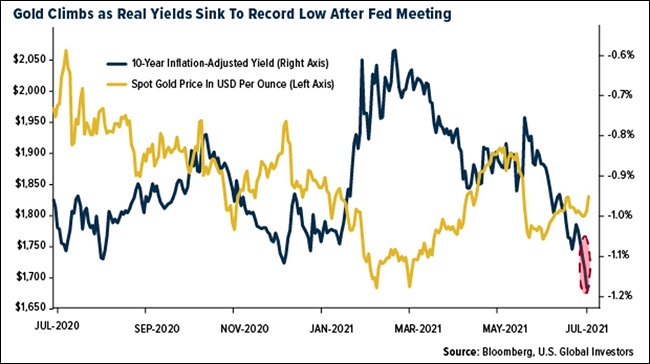 The 10-year inflation adjusted yield is the most widely used indicator for real interest rates which, essentially is 10-year rates minus inflation.  That’s the real return on an investment in a 10-year U.S. Treasury. 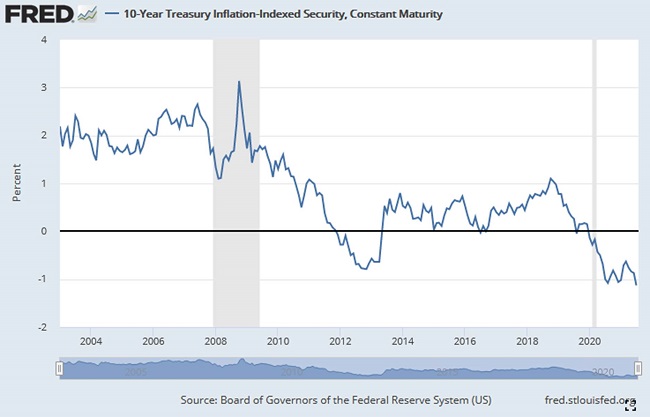 In fact, it’s also below what it was 12 months ago, back when gold reached an all-time nominal high at $2,060.  Which suggests gold should be even higher right now.

And what’s happened since then?

The US dollar index may have peaked at 93 after rallying on the back of the Fed’s slightly hawkish taper talk.  But Powell just recently said the US had not reached “substantial further progress” in order to start curbing the Fed’s $120 billion monthly bond purchases.

Powell also repeated that raising interest rates was not even being considered yet.  The likeliness rates will only rise more than two years from now, combined with persistent inflation, explains why real interest rates have continued falling.

Although a lot of the inflation talk was about how much lumber prices had soared, and recently dropped, the rest of the commodity complex has actually held very steady, with some components rising further.  The expanding money supply and fiscal easing to support an economic recovery are deep-rooted.  So I expect inflation, weakening currencies, and investors to shift towards assets that will offer protection in this kind of environment.

Perhaps they’re considering that the U.S. Economy may not be as healthy as it appears.  It expanded at a 6.5% annualized rate in Q2, but actually missed consensus forecasts of 8.4%, which is likely what caused the Fed to back off on the tapering talk.  What’s more, consumer price inflation (CPI) forecasts have crept higher, with US levels expected to rise to 2.5% for 2022.

While many central planners continue to disparage gold, what they’re doing with their money is quite the opposite.

Serbia’s National bank said, "Long term, gold is the most significant guardian and guarantor of protection against inflationary and other forms of financial risks.”  President Aleksandar Vucic recently indicated the National Bank of Serbia was looking to up its holdings from 36.3 to 50 tonnes of gold.

Commenting on central bank buying James Steel, chief precious metals analyst at HSBC said, "If a central bank is looking at diversifying, gold is a marvelous way of moving out of the dollar without selecting another currency".

Recent buying has likely been bolstered by economic recovery and higher oil prices, encouraging emerging market nations to boost their gold holdings.  The latest estimates show a trend in gold buying from central banks as they increasingly look to diversify their reserves.

Akash Doshi, along with other Citigroup analysts, wrote in a report that if the economy continues to gain steam, central bank buying might reach as high as 1,000 tonnes.  That would be very impactful, and would represent over 20% of the annual 4,500 tonne gold supply. 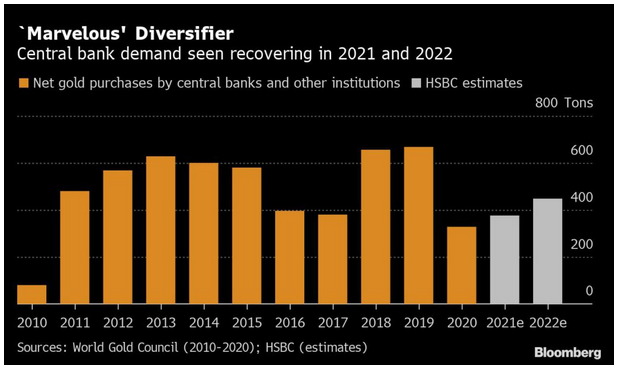 This mindset is even permeating through to actual government-level treasury management.  The state of Idaho recently passed House Bill 7, the Idaho Sound Money Reserves Bill, with overwhelming support.  The Bill, to be heard in the Senate, would permit – but not require – the State Treasurer to hold some portion of state funds in physical gold and silver to help secure state assets against the risks of inflation and financial turmoil and/or to achieve capital gains as measured in Federal Reserve Notes.

And yet gold is down about 10% after a 12-month long correction.  Naturally, since they leverage gold prices, gold equities have gotten proportionally cheaper.

Looking back over the past two decades, gold and silver miners have never had such a favorable profitability profile. 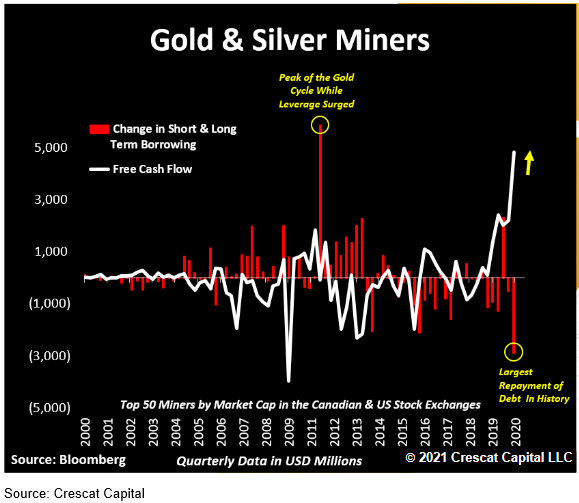 In fact, they recently completed their largest debt repayment ever and have never enjoyed such high levels of free cash flow.

Still, gold miners remain invisible to most investors.  However, some of the most astute market participants are noticing just how irresistible this sector is right now. 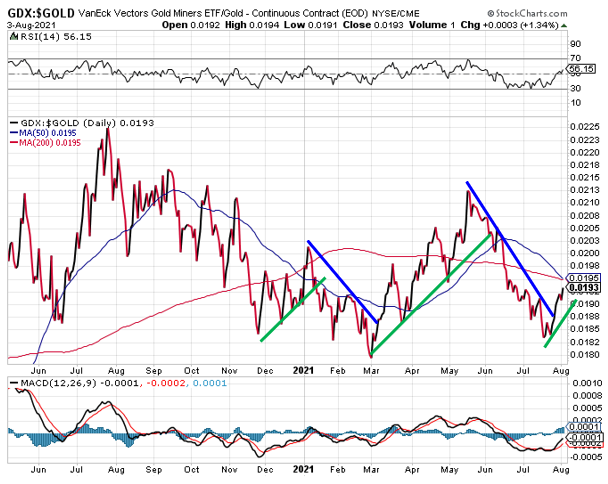 I believe that’s what we have right now.  Over the last three weeks, GDX has been gaining on gold, even as its price has been rising.  At the same time, both the RSI and MACD momentum indicators are confirming this move, and have plenty of room to run higher before becoming overbought.

What could go wrong? The biggest risk is that the U.S. dollar could regain some strength.  Technically, there is a reasonable argument for this, as the 50-day moving average has just crossed above the 200-day moving average forming a bullish “golden cross”.  Still, momentum indicators point to further downside.  Fundamentally, with Treasury yields so low and falling, the dollar would have to decouple from these to head higher.  I think the odds are relatively low.  And still, gold can rally even with a strengthening dollar.

One great way to play this setup is to own the VanEck Vectors Gold Miners ETF (NYSE:GDX) itself.  It’s an ideal one-click way to buy a basket of some of the world’s largest public gold miners and gold royalty companies.  You get instant diversification for a 0.51% expense ratio, with immediate exposure to the gold mining sector.  It’s got $14.6 billion under management and great liquidity with an average 20 million shares traded daily.

In the Gold Resource Investor newsletter, I provide my outlook on which gold and resource stocks offer the best prospects as this bull market progresses. Since adding a gold miners ETF to the portfolio in late 2018, it’s already up over 90%, with plenty of room to run higher.

I’d be hard-pressed to think of a more promising setup.  While most other asset classes and sectors are well overbought, gold and gold stocks are bargains by several measures.  This is the place to be as gold prepares to rally.