Inflation softened slightly in July and gold prices rose, but the bullish joy may be premature. How should we respond?

Inflation eased a bit in July, but it remained disturbingly high. According to the latest BLS report on inflation, the CPI increased 0.5% in July after rising 0.9% in June. The core CPI, which excludes food and energy, also softened, as it rose 0.3% in July after increasing 0.9% in June. The deceleration was mainly caused by a much smaller advance in the index for used cars, which increased only 0.2% (it was 10.5% in June).

However, on an annual basis, inflation practically stayed unchanged since June, as the chart below shows. The overall index surged 5.4% for the second month in a row (on a seasonally unadjusted basis), while the core CPI soared 4.3%, following a 4.5% jump in the previous month. 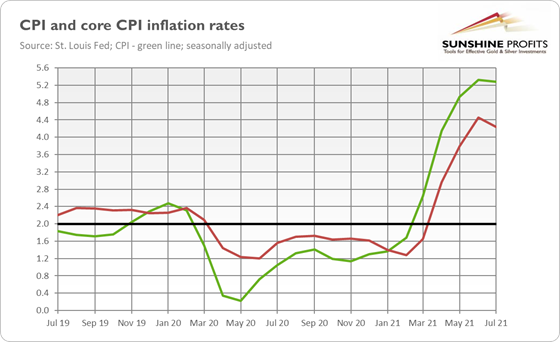 So, at first glance, it seems that inflation has peaked. This might be true, but please notice that it remained disturbingly high despite the deceleration in several subindexes, including the index for used cars. I dread to think what would be if these categories didn’t moderate!

What’s more, the producer price index for final demand rose 1% in July (MoM) and 7.8% over the past 12 months, as one can see in the chart below. It was the largest advance since the 12-month data was first calculated in November 2010. Part of this increase could be passed on to consumers later, as companies have recently gained more ability to lift prices seeing weak resistance to price increases. 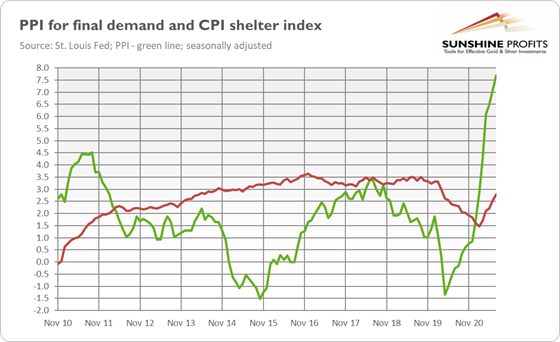 Additionally, the index for shelter – the biggest component of the CPI, not hit by the pandemic as strongly as restaurants and hotels industries – has been rising gradually since February 2021, and it has accelerated to 2.8% in July. Last but not least, the US Senate passed Biden’s infrastructure plan, which could also add something to the inflationary pressure by an increase in the money supply. All these developments suggest that inflation isn’t going away just yet.

What does the recent inflation report imply for the gold market? Well, theoretically, softer inflation should be negative for gold, which is seen as an inflation hedge and which historically shined during periods of high and accelerating inflation.

However, as the chart below shows, the price of gold has rebounded somewhat from last week’s low, gaining about $50 from Tuesday to Friday. It seems that steady (and partially below expectations) inflation gives the Fed room to maintain its ultra-dovish monetary policy. Indeed, according to the CME FedWatch Tool, the expectations for the Fed’s tightening cycle have diminished slightly from the previous week, which supported gold prices. 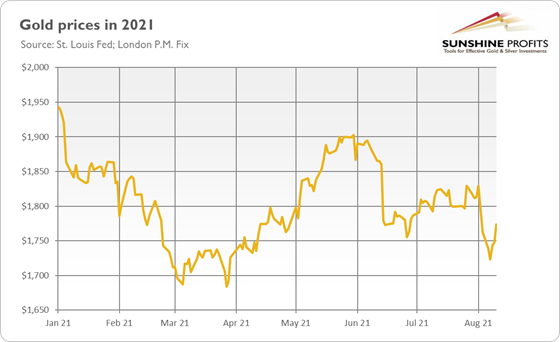 However, a bullish hurray might be premature. Inflation is still high and significantly above the Fed’s target. Inflation expectations remain elevated, and some measures even increased slightly in July. Unfortunately, markets seem not to worry significantly about inflation any longer, and the stock market continues its rally.

Even if inflation really softens later this year, which is likely given that some supply disruptions will probably resolve, it shouldn’t suddenly dive below 2%. So, the July report shouldn’t materially change the Fed’s stance, especially that the US central bank focuses more on the labor market now. Hence, gold investors should brace themselves for the upcoming tapering of quantitative easing.

However, just as day comes after night, upward waves come after bearish trends. The most likely macroeconomic scenario is that inflation will remain high, while the economic growth will slow down, which means stagflation. Indeed, the downward trend in the bond yields – despite high inflation – could signal weak growth, requiring dovish monetary policies. If history is any guide, gold will shine during stagflation.