As Editor of Battery Materials Review and Head of Research for Westbeck Capital's Volta Energy Transition fund, over the course of the past several years I've noticed a number of trends that I would suggest that many people who are outside the direct ET wouldn't notice and perhaps those who are deep within it also are not noticing. One of the key trends that worries me is inflation.

In the first part of my five part series on the cost of decarbonisation I discussed hydrocarbons, and the effect that ESG pressure to cut investment in oil and gas exploration is going to have on the global economy over the next decade. The areas I'm discussing in this blog-series are:

In this part, I'm going to discuss a theme that's closer to home; Electric Vehicles and the impact that their roll-out is likely to have on the consumer.

Part 2: The hidden cost of the EV roll out

There's no doubting now that the EV event is a "thing". It's real. Governments and consumers have put their support behind it and it's going to happen. We have passed the point of no return in the EV event and that should be positive for decarbonisation and the Energy Transition.

However, there are a number of issues with regards to the adoption of EVs that are likely to be inflationary and impactive to the consumer.

First of all, let's talk about vehicle prices. We've seen the impact that higher vehicle prices can have on inflation over the course of this year. The semiconductor shortage has led to production cuts for new cars and prices of used cars going through the roof.

If you look at the relationship between car prices and US CPI (Consumer Price Index; proxy for inflation) you can see that there is a correlation between the two and we would suggest that car prices are a component of CPI and hence of inflation. 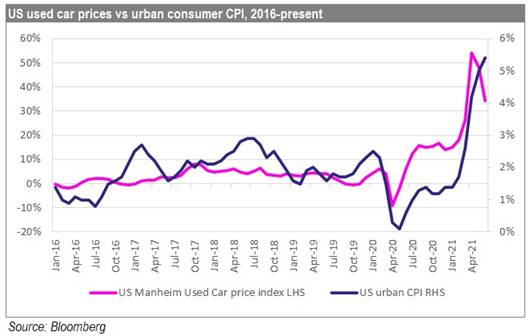 This is an issue because, put plainly, EVs cost a lot more than ICEs. Our analysis of car sales in Europe suggests that the median price for mass market (ICE) vehicles in Europe is of the order of £15,000. The median price of EVs is c.£30,000 which is £25,000 including subsidies. That's a big difference. 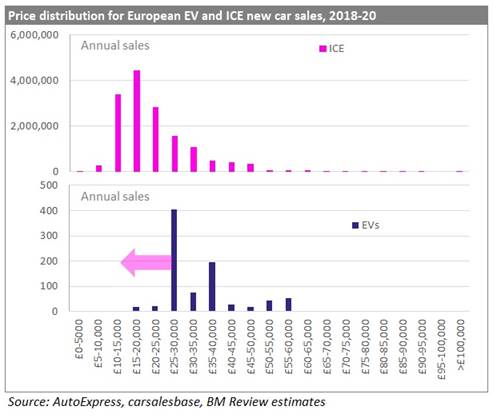 While EV prices have been heading south, they haven't been reducing rapidly and I'm very concerned that that improvement in prices is likely to be halted by rising battery raw materials prices in the next 12-18 months. Auto OEMs would suggest that they have been achieving substantial improvements in manufacturing efficiencies, but I expect those improvements to be offset by increases in battery raw material prices (given that battery prices are a substantial percentage of manufacturing costs in electric vehicles).

In the best case outcome that means that EV prices would be flat. We will therefore need to see either smaller batteries or different battery technologies for EVs to compete in the mass market. With the number of ICE models being offered by Auto OEMs waning (particularly in Europe), consumers will be forced to buy higher priced EVs. Realistically those are likely to be on credit, which will mean that consumers will likely be paying higher interest charges on a monthly basis. Whether they pay outright for vehicles or pay higher interest charges, it will have an inflationary effect.

But, hold on a minute, maybe it's not so bad. Surely one of the key selling points for EVs is that they have considerably-lower operating costs than for an ICE?

And you would be correct if you thought that. Even if the electric vehicle has lower range than an ICE, it costs a lot less to charge it. For home charging in the UK, we're talking in the ballpark of 10-15 pence to charge an EV and for side of road charging we're talking 20-30p, as compared with over £50 to fill up with a tank of petrol (assuming a 42 litre tank). The differential in Europe is similar, but probably not so much in the US where petrol (gasoline) is not so heavily taxed.

So, straight out, operating costs of EVs are going to be less. As are servicing costs. EVs are much more simple than ICEs. There are only about 20 moving parts in an electric vehicle engine vs about 2,000 in an ICE engine. Hence, EVs are likely to need substantially less maintenance and servicing over time. However, it won't be zero as there are other features that will cost money such as tire changes. And EV consumers should also be aware of insurance costs which, because of the higher value of the vehicle, work out more than for ICEs.

Well, yes, but only in some instances.

What we basically found is that for high mileages, EVs did work out cheaper than ICEs, whichever financing solution one utilises. For lower mileages, EVs worked out on average as economic as ICEs utilising a leasing approach, but were substantially more expensive utilising a credit approach. So, which financing approach consumers choose to utilise is going to be key as to whether EVs are inflationary or not. 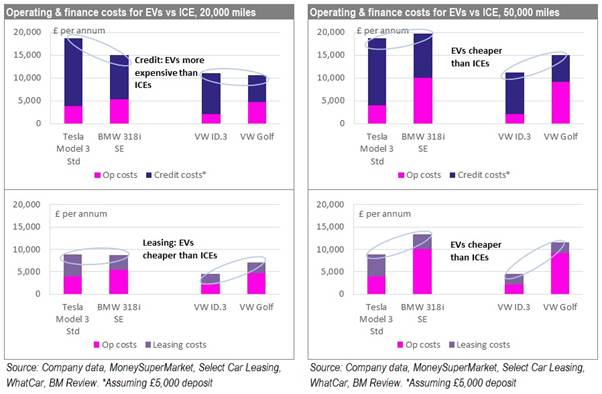 So, it's very much a mixed outlook; EVs are going to be inflationary for cash buyers and those buying on credit who drive short distances per year. They will be neutral or deflationary for those leasing or those travelling longer distances. That's very relevant for those living in large countries like the US, but it's also relevant for regions like Europe and China where average driving distances are shorter and most vehicles are used only for the commute to and from work.

One caveat in this section; while I noted that operating costs for EVs are lower than for ICEs I didn't include road taxes and I used spot electricity prices. Given the amount of money raised by many governments in fuel taxes, it's reasonable to assume that governments will want to find some way to tax EVs eventually (even if it's politically unacceptable to do so in the next few years). I will also note, with reference to part 3 of this series, that there is a very strong likelihood that power prices will rise in coming years. While it is not possible that they will rise enough to compete with petrol/gasoline prices, even small changes in costs could alter the relative economics of EVs vs ICEs given the impact of financing costs. While these factors are unlikely to be impactful in the near-term they should be considered as potentially impactful in the medium to longer term.

Infrastructure role out also has costs

But there's one other impact for EVs that we have to consider, and that's the cost of the infrastructure investment. It's not just the provision of electric vehicle chargers, it's also the improvements to the electricity transmission and distribution networks that are required to support the provision of multiple chargers outside the home.

BNEF forecasts that US$589bn will need to be invested globally in EV charging infrastructure by 2040 to deploy over 309 million connectors. That's up from the US$33bn that had been invested up to 2020. 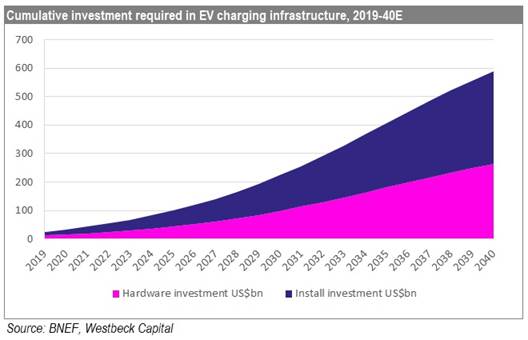 Home charging is likely to remain the dominant method of charging, accounting for 85% of chargers and 40% of investment, but public charging is of increasing importance and costs more to install (particularly as this is the bulk of fast charging). We are talking about US$308bn of distribution infrastructure investment globally by 2040 or an average of US$15bn pa. Realistically, in my view, the cost is likely to considerably higher than that because copper, aluminium and plastics prices are set to increase (see part 4 of this series). By the second half of this decade, the cost could very well be 50-100% higher than these estimates suggest, in my view. And who's going to end up paying for that? Most likely it will be passed on by the electricity companies to the consumers by way of higher power/charging prices.

In the next blog in this series I'll talk about the impact of renewables on the consumer.