It was 20 years ago today that the world stopped. And like the assassination of JFK, for many of us, we'll always remember exactly where we were and what we were doing at that moment. You never get over it, let alone if you loved or knew of someone who never came back.

Years earlier in 1953, Ian Fleming wrote, (his hero having just barely escaped a suicide bombing): "Bond sat for a while by the window and enjoyed being alive." Take a moment each day to do just that.

Today by our opening Gold Scoreboard we value Gold at 3902 given the debaucherous debasement of the Dollar, even in accounting for the supply of the yellow metal itself having grown +35% during the past two decades. And yet Gold settled this past week yesterday (Friday) at the ever-lowly level of 1788. That's still is a net increase since "9/11" of +557%. But by a brief back-of-the-napkin analysis along the currency debasement curve (which extends back to 1980), such percentage increase ought by now be double that. And equally incredulous, the net increase from 20 years ago-to-date in the S&P 500 (which settled yesterday at 4459) is +308%. But by its brief back-of-the-napkin analysis along the unsupportive earnings curve, such percentage increase to today ought be just half that, given the 50.4x "live" price/earnings ratio.

Therefore 20 years on, Long Gold/Short S&P is an arbitrage play on a Silver platter toward future values being reflected by actual prices, which history proves always eventuates, (nudge-nudge, hint-hint, elbow-elbow).

"And mmb, it looks like last week you called the stock market crash which maybe is starting?"

Honestly Squire you are quite kind to note that, but hardly can we take a wit of credit, if only because we've been going on about "it all going wrong" for years since the S&P's skyrocketing without accompanying supportive earnings. To be sure, even a broken clock is right twice-a-day, aided now by it being what historically is "Crash Season" for stocks. However as interest rates remain practically zero and Federal Reserve taper still more inferred than concurred, the notion of a true S&P "crash" (i.e. -50% or worse) remains deterred. (That noted, should the typical September/October pullback continue, by historical average declines, the S&P would see the 4100s in the ensuing weeks).

As for Gold, the year is running out of weeks for price to achieve our 2021 forecast high of 2401. That acknowledged, there are two points we are hearing more often now than ever before:

■ Folks who don't regularly follow the price of Gold are asking with greater frequency as to why the price is so cheap given the destruction of the Dollar. This is encouraging to hear from the otherwise lay-crowd as Gold remains ridiculously under-owned;

■ Further to folks' query as to Gold trading well below its true value has been the increasing curiosity over "The M Word". Be they the price swappers at the Bank for International Settlements or the futures corralers at the Big Banks, the so-called "Manipulators" are getting a lot more, shall we say, "air-play" in conversations these days.

And at some point, the Basel III bullet shall have to be bitten, (i.e. "Yer paper Gold don't count no more!")

Be that as 'twill, the present price of Gold remains bitten within the ongoing parabolic Short trend, now 11 weeks in duration. But save for "The M Word" herd, which four weeks prior pounded price into the ground, Gold today is at the exact same level 'twas -- 1788 -- upon confirmation of such Short trend kicking in on 02 July. Notable too in this next chart of Gold's weekly bars from a year ago-to-date, the declining dashed diagonal trendline has in fact been marginally rotating toward positive for the past seven weeks, (which for you WestPalmBeachers down there means it ain't as steep now). Still, with price 73 points below the 1861 "flip-to-Long" level, the chances of that happening in the new week are a bit slim given Gold's "expected weekly trading range" is 51 points, with further near-term technicals looking a bit negative as we'll later mention. 'Course, millennium-to-date, Gold has had 38 weekly price increases of better than 51 points: thus, Edgar, never say never: 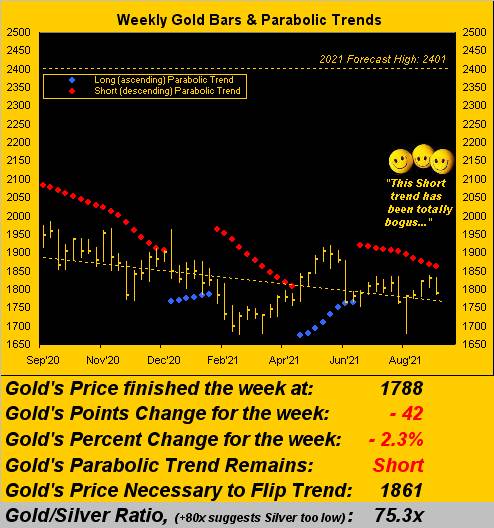 More broadly as we bring up Gold's stalwart 300-day moving average, its three-year rise continues, albeit of late with a bit less alacrity:

Meanwhile lacking all alacrity whatsoever is our Economic Barometer:

And the past week's minimal amount of incoming metrics were mediocre at best, (save for Initial Jobless Claims being their lowest since the pre-COVID week ending 14 March 2020). July's Wholesale Inventories didn't back up as much as they had in June, however consumers took on less than half the amount of credit they did during the prior month, which brings demand into question. The good news for the Fed however, albeit 'tis not their favoured indicator of inflation, is that at the wholesale level the annualized rate backed off some 30%-to-40% in August from the July reading. Still, as we've asked in the past: Transitory? Or Perma-Story? For now, let's go with Stagflatory...

As for the state of stimulus on this side of the pond, money is to remain as loose as a goose per European Central Bank President Christine Lagarde's concern over rising COVID cases and signs of an overall global economic slowdown.

But wait, there's more: Recall back in late June TreaSec Janet "Old Yeller" Yellen telling Congress that 'twould be unthinkable for the U.S. to default on its debt? Well, the clock's just about ticked all the way down, indeed threatening exhaustion of the Treasury's emergency measures: stop Congressional spending (laughable) else allow for more borrowing (the ole full faith 'n credit dance), or 'tis "Game Over" at the end of October.

Now we hesitate to say -- in near-term context only -- that 'tis "Game Over" in just a wee sense for Gold; but this next two-panel graphic hardly holds hope. On the left across Gold's daily bars for the last three months-to-date we've the baby blue dots of trend consistency falling away: and those "Baby Blues" have been a superb directional indicator across that whole pricing span. On the right in the yellow metal's 10-day Market Profile, this past week saw price descend from the top to the bottom, overhead trading resistance as now denoted. As well, Gold's daily MACD (moving average convergence divergence) confirmed a negative crossing on Thursday at the price of 1796: we only mention that as four of the last five such negative crossings recorded drops in excess of 80 points prior to the signal returning to positive. That said, we do not anticipate any such degree of downside excess this time 'round, but 'tis something of which to be wary:

True, too, is the like graphic for the white metal, wherein at left the "Baby Blues" have been pretty much on directional cue whilst at right Sister Silver's looking rather blue: 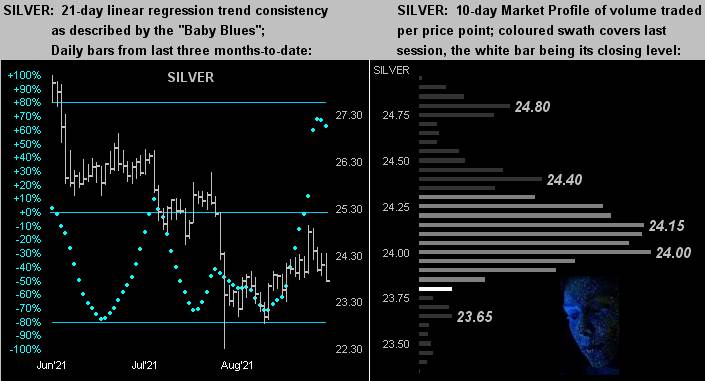 To wrap, the mighty-mite nation of El Salvador is adopting a third legal tender "currency". In addition to its own Colón and the U.S. Dollar, three-cheers are in order for the new entrant: bits**t, as promoted by President Nayib "Nice Bits!" Bukele. But we do have a question: if your Salvadoran stock as traded on the Bolsa de Valores de El Salvador is denominated in bits**t, upon the morning you wake up to learn that in an electrical heartbeat bits**t was vaporized, is your stock then worth nothing, or would it then be revalued in the Colón or the U.S. Dollar? Moreover at what rate? After all, a rate cannot be applied to a nothing. Hmmm. One more question: Got Gold? 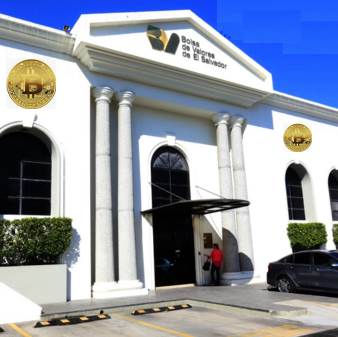