As of 4:25 PM EDT gold futures basis, the most active December 2021 Comex contract is currently up $12.70 and fixed at $1807.10. Today’s moderate price advance taking gold above $1800 per ounce is a direct result of a government report indicating that the CPI (Consumer Price Index) showed that inflationary pressures contracted fractionally in August. 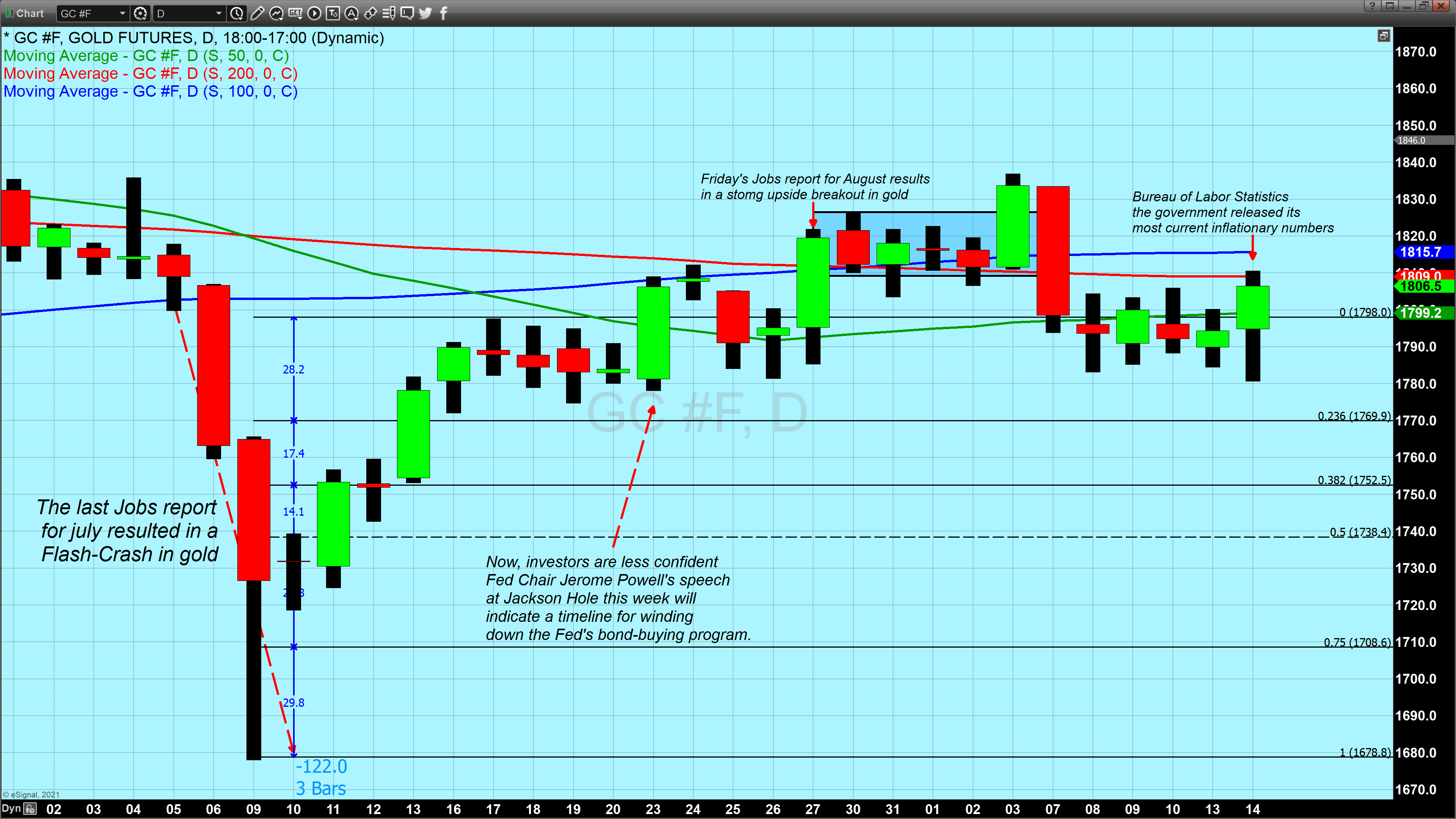 In a News Release from the Bureau of Labor Statistics, the government released its most current inflationary numbers for August 2021.

“The Consumer Price Index for All Urban Consumers (CPI-U) increased 0.3 percent in August on a seasonally adjusted basis after rising 0.5 percent in July, the U.S. Bureau of Labor Statistics reported today. Over the last 12 months, the all-items index increased 5.3 percent before seasonal adjustment. The indexes for gasoline, household furnishings and operations, food, and shelter all rose in August and contributed to the monthly all items seasonally adjusted increase. The energy index increased 2.0 percent, mainly due to a 2.8-percent increase in the gasoline index. The index for food rose 0.4 percent, with the indexes for food at home and food away from home both increasing 0.4 percent.”

This report pressured the US dollar lower, with the dollar index currently fixed at 92.625 after factoring in today’s decline of -0.03%. However, it was not so much the fractional decline of dollar value but the reaction by market participants as it pertains to the future actions of the Federal Reserve. Specifically, it eases the potential for the Federal Reserve to begin to taper its monthly asset purchases later rather than sooner.

According to Reuters, “Gold hit a one-week high on Tuesday, as the dollar retreated after a slower-than-expected rise in U.S. inflation led to uncertainty over the U.S. Federal Reserve’s timeline to taper monetary stimulus.”

Market sentiment currently is leaning towards the belief that the Federal Reserve will announce when it will begin to taper in November. However, the September FOMC meeting will conclude with the Fed releasing its most current “dot plot” which will include/add their assessment for interest rate values in 2024. In an interview with Reuters Suki Cooper, precious metals analyst at Standard Chartered Bank said, “While a tapering announcement is unlikely until the November FOMC meeting, the September meeting will introduce the staff forecasts or ‘dots’ for 2024. The 2024 dots could mirror 2023’s two rate hikes.”

The release of today’s inflationary numbers was interpreted as a bullish event for gold pricing. As such we could expect to see gold continue to rise over the next couple of months. Our technical studies indicate that current resistance resides first at $1809, gold’s 200-day moving average, and $1815.70 gold’s 100-day moving average. Major resistance occurs at $1837, which is the intraday high achieved on September 3.