This has been an extremely difficult week for gold losing approximately $36. Gold futures basis the most active December 2021 contract opened on Monday at $1790 and is currently fixed at $1753.90. Today gold continued its decline, although only fractionally, declining $2.80 on the day. 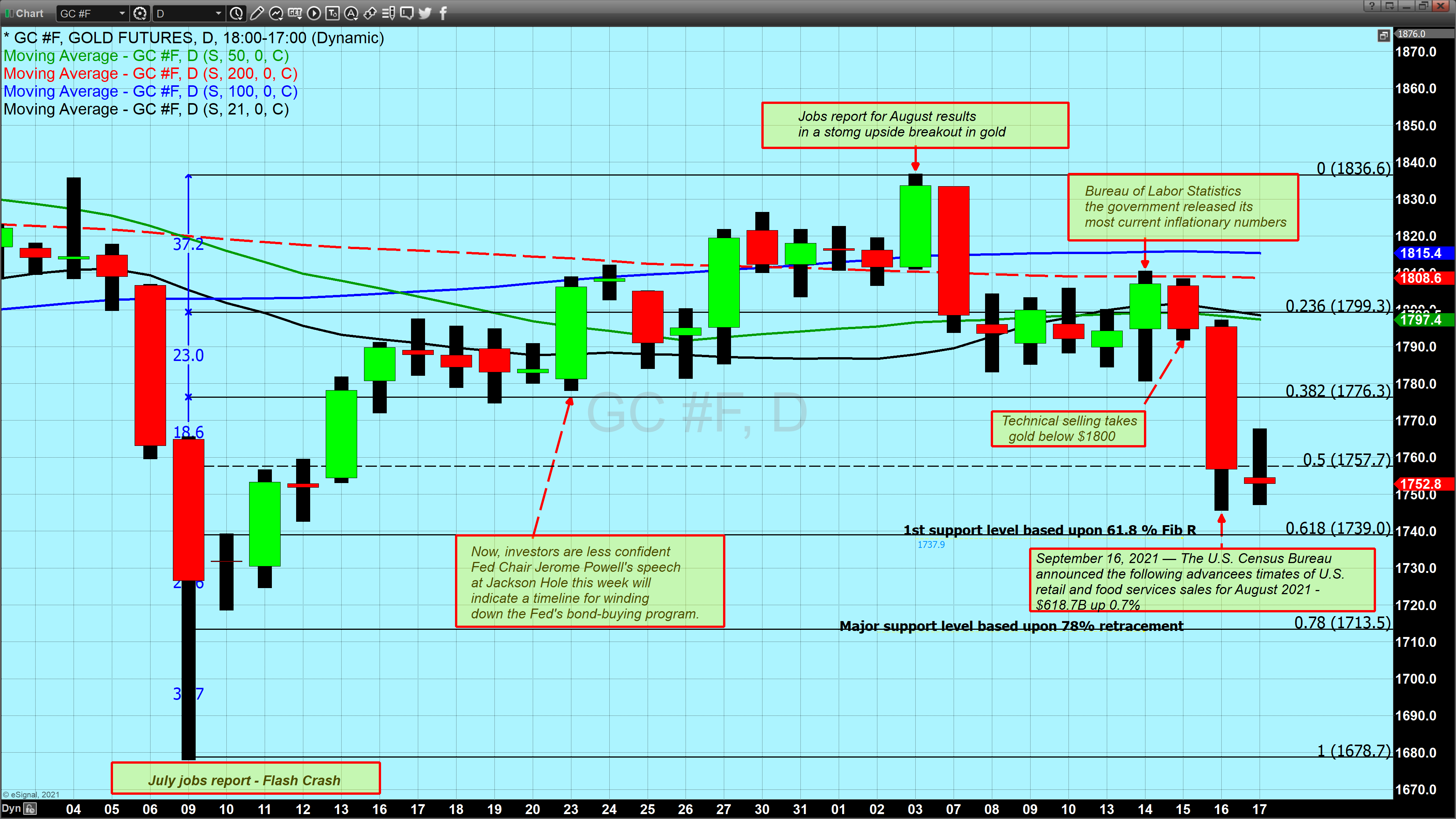 Yesterday’s meltdown of $41 in gold was a partial result of dollar strength however, that was responsible for only a small component of the decline. The primary cause of yesterday’s tumble was a direct result of the U.S. Census Bureau’s monthly sales and food services report for August 2021. Analysts polled by various news sources had estimated that the report would show that retail sales had declined by a range of -0.8% to a decline of -1.8%. The actual numbers were the opposites of forecasts and predictions by economists.

The report showed that consumer spending increased last month by 0.7%, resulting in sales of $618.7 billion. A stronger indication of the robust retail sales in August can be seen if you strip out automobile and truck sales which would then result in consumer spending increasing by 1.8%. While the demand for automobiles and trucks was brisk it was supply limitations that those sales muted.

With the Federal Reserve set to begin their September FOMC meeting on Tuesday, September 21 the real question becomes how Federal Reserve members will interpret the recent data and their overall outlook of the economic recovery as it pertains to announcing when they will begin to taper their monthly asset purchases of $120 billion.

The data that they will be looking at is mixed. The jobs report for August came in exceedingly weak and well below expectations and forecasts by economists. Expectations for the U.S. Labor Department’s August jobs report were that 720,000 new jobs would be added to nonfarm payrolls. The actual report showed that only 235,000 new positions were added last month. Since the Federal Reserve has gone on record stating that maximum employment is their ultimate goal in their dual mandate which also includes keeping inflationary pressures around 2%. This should be the most important report when the Fed convenes next week to consider changes to their current monetary policy.

This week the Bureau of Labor Statistics released their current numbers on inflation, the CPI (Consumer Price Index). The report indicated an increase of 0.3% in August on a seasonally adjusted basis after rising 0.5% in July. This clearly illustrated that inflationary pressures have not abated significantly. The year-over-year inflationary rate did tick down from 5.4% to 5.3%. It must be noted that inflationary pressures above 5% are at their highest level since the recession of 2009.

The net result of all of the reports combined confirms that the U.S. economic outlook continues to contain an enormous amount of uncertainty. While the Delta variant of Covid 19 has begun to show declines in terms of daily cases reported in the United States. But there are still hotspots in the United States that are still rising at an alarming rate.

With a tepid August jobs report set against strong retail sales in August, Federal Reserve members have to face that economic growth is still coming in weaker than forecast but recovering nonetheless. This has put different Federal Reserve members divided as to when they will begin to taper their asset purchases. Chairman Powell did make a clear distinction between the timeline to initiate tapering and lift off of interest rate normalizations saying that the Federal Reserve has a different set of criteria for both of those components of their current extremely accommodative monetary policy.

According to MarketWatch, roughly half of the Federal Reserve’s 18 top officials support tapering “sooner than later.” However, “The other half of the Fed leadership have said they would like to see more data on the labor market before the threshold for tapering is met. They think it is still important to support demand in coming months as the economy regains its footing in the wake of the coronavirus.”

This puts Chairman Powell between a rock and a hard place to satisfy both the more hawkish and dovish top officials of the Federal Reserve. Even major analysts are divided on what they believe the Fed will announce next week regarding any guidance towards the onset of tapering. The only certainty that we know will emerge from next week’s FOMC meeting is an updated “dot plot,” which will include projected interest rates for 2024 for the first time.

Unmistakably this will be one of the most critical FOMC meetings this year in that it will give market participants a real glimpse further out in time than ever before.