In recent issues I've lamented how the miners have not moved, and indeed, are so much lower than they were back then. We've racked our brains for an answer to this. The only thing we can come up with is that sometimes entire sectors become "unloved" or ignored. In light of the vastly deteriorated economic, inflation, and debt picture today as opposed to 2011, we just can't think of any fundamental reason why the precious metals miners are so much lower now, compared to gold.

It is only a matter of time before this sector takes off. We may have seen the start of such a trend this past Monday. While gold and silver actually fell a bit, the miners exploded. I haven't seen that kind of action in recent memory. EQX surged by 7%; GDXJ by 4%, and most miners were up more than normally.

Still, at last measure, EQX and SSRM are among the companies that are still trading just below book value. By any reasonable measure, they have far more to go upwards in value. 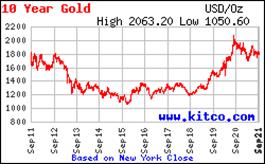 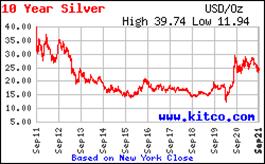 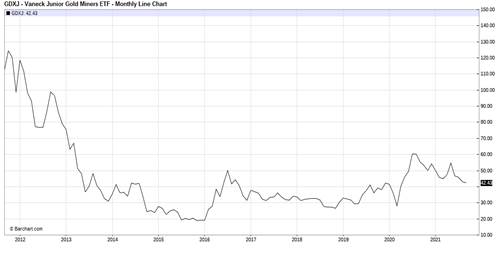 In any hated or ignored sector, if you think there is value to be had, the hardest thing is to simply have patience, after taking a position. There is simply no telling how long that wait will be. The one thing you know is that sooner or later, what is ignored and very cheap will be discovered by the mainstream of investors. I've seen it happen time and again.

The market action of Monday, September 13, was very heartening. It is why I'm bringing up this subject now. We may be on the threshold of finally seeing the sector rise to where it should be.

Interestingly, the royalty companies are in general exceptions to this: Franco Nevada has never been higher. At over $143, it now dwarfs the $40 price of ten years ago. RGLD is nearly double what it was back then. 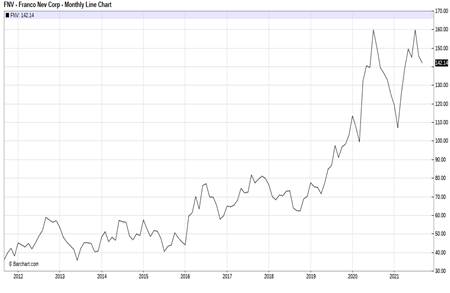 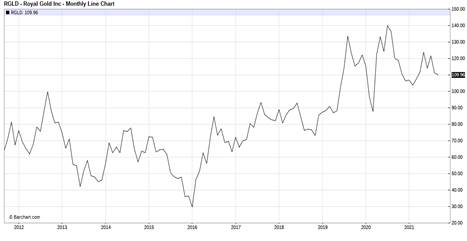 Could it be that only those companies that get a percentage of the royalties are doing well? If so, what does this say about the companies that actually do the mining? Their costs may have gone up; with inflation they almost certainly have... unless some very smart hedging has been done. But does this explain so vast a difference in price over the past ten years?

If any mine operator wants to email me with any reasons, I'll be only too glad to listen.

In the US, the Congress is about to pass a tax bill that will set US taxes above those of Communist China. That's one statement I never thought I would make! 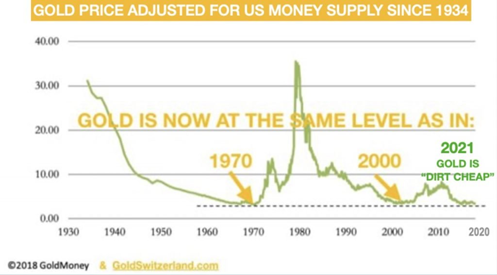 Globally, central banks have poured new money into stimulus: the global money supply is far above what it was ten years ago.

According to this chart above, gold is now as cheap, relative to US money supply, as it was in both 1970 and 2001. Both of those years represented the beginnings of huge bull markets. Can we hope and expect that this trend ---which is entirely logical-- may soon be repeating itself?

One of the fastest rising costs I can think of for us "average Joe’s" is health insurance. I remember a "Rolls Royce" type of family health insurance policy (with maternity benefits for the wife) was $400 a month in late 2000 and now I’ve heard such equivalent policies cost at least $2000 a month.

In 1999, when premiums were less than $400 a month, to have a baby in the hospital with a night stay cost me $100 (yes, one hundred dollars TOTAL) for everything! Now, you typically have to spend $7500 out of pocket first before insurance really kicks in. (Now, I’m starting to sound like my grandparents and I’m only talking about 20 years ago).

This is an extremely good example and reminder to me of both precious metals keeping up with a "feeling rich" living standard even though it certainly feels to me like silver is lagging in price.

Federal Reserve Credit is the raw material of inflation. Exactly ten years ago, it stood at $2.9 trillion. Today it is $8.4 trillion. (At the end of 2000, it was about half of one trillion.) At the end of 2000, people were actually talking about how things were on track to eliminate the national debt. Today, we are pushing $30 trillion.

Fully $8 trillion of that went into the wars in Iraq and Afghanistan, and we know what that money accomplished.

It is now hard to think of the US as anything but an empire in decline. Sadly, there is nothing I see on the horizon that makes one think that things will turn around. Still, I hope I am wrong.

On top of that, Americans have not been as divided against each other for so long a period since the 1850s and 1860s. And we know what that period involved.

Is A Change In Trend Here?

Tuesday, September 14, was the second day in a row where the precious metals miners did sharply better than the Dow and S&P. I'm hoping this is now the start of a trend. If so, it is long overdue: no sector can be fundamentally sound and stay as low as this one has been.

On one recommendation I have so far been wrong: DBC has done little since recommended. If you have too much, consider paring your holdings down and placing the proceeds in our direct mining ETFs or individual stocks.

If the last couple of days are the start of a trend, you want to have a solid position in this area of (active, rather than potential) precious metals miners.

The Lowly US Nickel Is Now 18% Above Melt Value

One by one, traditional US coins have become more valuable for the metal they contain than their face value.

First, in the 1960s, the silver dimes, quarter, half dollar and silver dollars all became objects of hoarding because of this. Their replacements contained cheap metals, and who in their right mind would part with a coin of 90% silver with the same face value as the new, shoddier replacements?

And now comes the 5-cent piece, the nickel. Because the name is the same as the metal, it will be harder to remove the nickel metal and give people something cheaper. And yet, already this coin is now 75% copper and just 25% nickel. The value of these two metals has risen so much that each of these five cent pieces are now worth 18% above their face value. That means that the 5-cent piece is now worth almost 6 cents.

This difference may not be enough to cause people to withdraw nickels from circulation: most people are not even aware of what has happened, and even if they are, there is not the greater money value of the larger denomination coins.

However, if metals prices keep rising, at some point mints around the world will be faced with a problem. For the lowly nickel, how much less than the current 25% used can the US Mint go and still call it a nickel? And at some point, if this keeps up, you'd have to believe that nickels would be traded for their metal value and not for their face values. Maybe this will finally alert the average person to what has been done to our money. 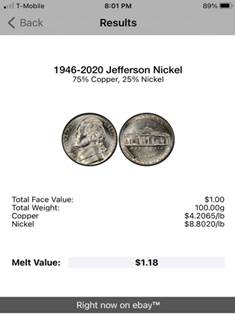 What we do when we first buy a stock is to set a Trailing Stop, usually of 25%, but sometimes less. This protects you in case the recommendation falls too much.  In the other extreme, if you are lucky enough to have a stock double, we sell an amount of that stock equal to the money amount you first invested: your principal. Then we hold the rest.

If you want to buy the U.S. dollar, I recommend keeping your maturities as short as possible,

Read the recent letters to get my opinion on where we are now.

Investing in securities underlying in currencies other than the US dollar involved certain considerations comprising both risk and opportunity not typically associated with investing in US securities.  The security may be affected either favorably or unfavorably by fluctuation in the relative rates of exchange between currencies, by exchange control regulations, or by indigenous economic and political developments.  As with any investment, there is no guarantee against potential loss. It should not be assumed that the recommendations made in the future will be profitable or will equal the performance of the securities on this list.

Follow @KitcoNewsNOW
weberglobal.com/
Disclaimer: The views expressed in this article are those of the author and may not reflect those of Kitco Metals Inc. The author has made every effort to ensure accuracy of information provided; however, neither Kitco Metals Inc. nor the author can guarantee such accuracy. This article is strictly for informational purposes only. It is not a solicitation to make any exchange in commodities, securities or other financial instruments. Kitco Metals Inc. and the author of this article do not accept culpability for losses and/ or damages arising from the use of this publication.