The declining medium-term outlook for gold, silver, and mining stocks will eat away at the honey pot of US dollar bears. Get ready for bee stings.

With headline after headline attempting to knock the USD Index off of its lofty perch, I warned on Sep. 13 that dollar bears will likely run out of honey sooner rather than later.

While the USD Index was under fundamental fire in recent weeks, buyers eagerly hit the bid near the 38.2% Fibonacci retracement level. And after positive sentiment lifted the greenback back above the neckline of its inverse (bullish) head & shoulders pattern last week, the USDX’s medium-term outlook remains profoundly bullish.

More importantly, though, after the USD Index rallied by 0.63% last week and further validated its bullish breakout, gold, silver, and mining stocks ran in the opposite direction. And with the divergence likely to accelerate over the medium term, the swarm should sting the precious metals during the autumn months. 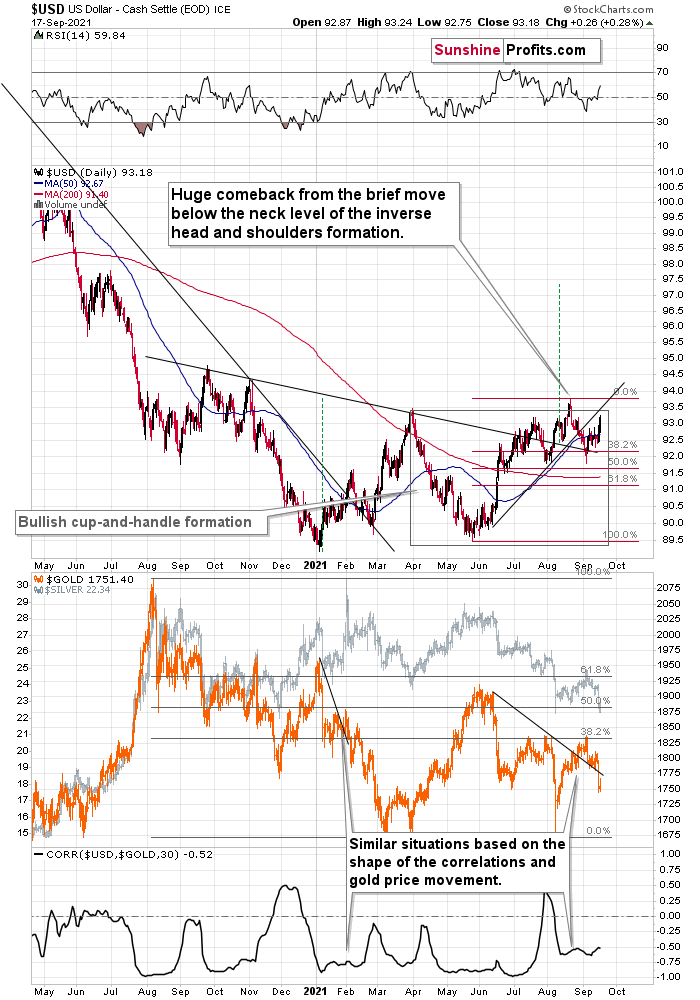 Conversely, if the USD Index encounters resistance as it attempts to make a new 2021 high, gold, silver, and mining stocks could enjoy an immaterial corrective upswing. However, the optimism will likely be short lived, and it’s likely a matter of when, not if, the USD Index reaches the illustrious milestone.

Equally bullish for the greenback, with the USD Index’s technical strength signaling an ominous ending for the Euro Index, I warned on Sep. 13 that the latter faced a tough road ahead.

While I have less conviction in the Euro Index’s next move relative to the USD Index, more likely than not, the Euro Index should break down once again and the bearish momentum should resume over the medium term.

And after the Euro Index sunk below the neckline of its bearish head & shoulders pattern last week, lower lows remains the most likely outcome over the medium term. 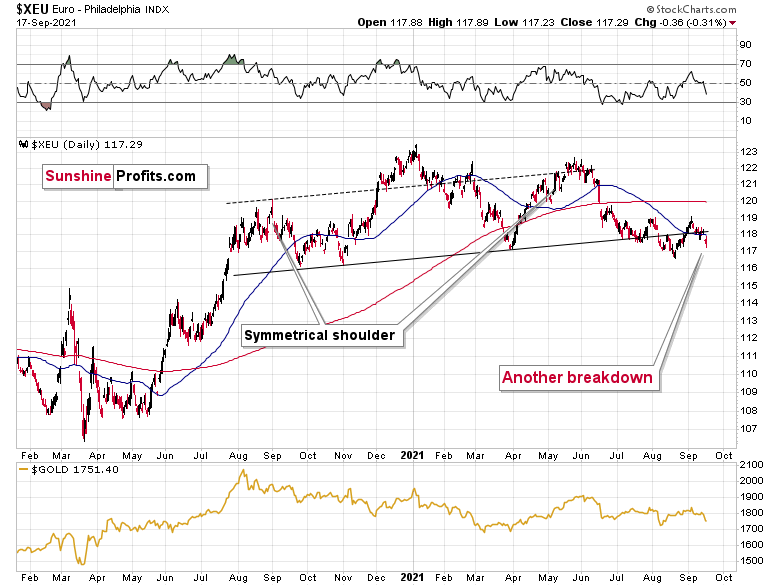 Adding to our confidence (don’t get me wrong, there are no certainties in any market; it’s just that the bullish narrative for the USDX is even more bullish in my view), the USD Index often sizzles in the summer sun and major USDX rallies often start during the middle of the year. Summertime spikes have been mainstays on the USD Index’s historical record and in 2004, 2005, 2008, 2011, 2014 and 2018 a retest of the lows (or close to them) occurred before the USD Index began its upward flights (which is exactly what’s happened this time around).

Furthermore, profound rallies (marked by the red vertical dashed lines below) followed in 2008, 2011 and 2014. With the current situation mirroring the latter, a small consolidation on the long-term chart is exactly what occurred before the USD Index surged in 2014. Likewise, the USD Index recently bottomed near its 50-week moving average; an identical development occurred in 2014. More importantly, though, with bottoms in the precious metals market often occurring when gold trades in unison with the USD Index (after ceasing to respond to the USD’s rallies with declines), we’re still far away from that milestone in terms of both price and duration.

Moreover, as the journey unfolds, the bullish signals from 2014 have resurfaced once again. For example, the USD Index’s RSI is hovering near a similar level (marked with red ellipses), and back then, a corrective downswing also occurred at the previous highs. More importantly, though, the short-term weakness was followed by a profound rally in 2014, and many technical and fundamental indicators signal that another reenactment could be forthcoming.

Just as the USD Index took a breather before its massive rally in 2014, it seems that we saw the same recently. This means that predicting higher gold prices (or the ones of silver) here is likely not a good idea.

Continuing the theme, the eye in the sky doesn’t lie. And with the USDX’s long-term breakout clearly visible, the wind still remains at the greenback’s back. 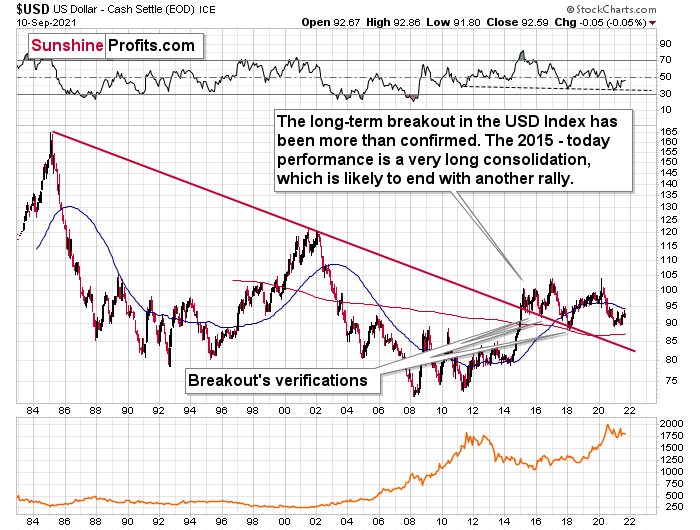 Once the momentum unfolds, ~94.5 is likely the USD Index’s first stop, ~98 is likely the next stop after that, and the USDX will likely exceed 100 at some point over the medium or long term. Keep in mind though: we’re not bullish on the greenback because of the U.S.’ absolute outperformance. It’s because the region is fundamentally outperforming the Eurozone, the EUR/USD accounts for nearly 58% of the movement of the USD Index, and the relative performance is what really matters.

In conclusion, the USD Index’s sweet performance left sour tastes in the precious metals’ mouths. And with the former’s bullish breakout signaling an ominous future for the latter, gold, silver, and mining stocks will likely confront new lows over the medium term. However, once the autumn months fade and the winter weather approaches, buying opportunities may present themselves. And with unprecedented monetary and fiscal policy likely to underwrite new highs in the coming years, the long-term outlook for gold, silver, and mining stocks remains extremely bright.

Thank you for reading our free analysis today. Please note that the above is just a small fraction of today’s all-encompassing Gold & Silver Trading Alert. The latter includes multiple premium details such as the targets for gold and mining stocks that could be reached in the next few weeks. If you’d like to read those premium details, we have good news for you. As soon as you sign up for our free gold newsletter, you’ll get a free 7-day no-obligation trial access to our premium Gold & Silver Trading Alerts. It’s really free – sign up today.