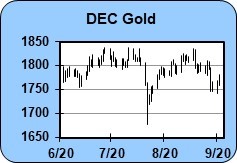 Not surprisingly, the gold market is tracking lower today following a deflation of fear from the Evergrande default threat after the company settled its interest payments on a domestic bond. Seeing gold fall back this morning is justified, but the market is likely seeing some cushion from news that the PBOC injected liquidity into the markets to the tune of 160 billion yuan. The gold market has displayed several instances of classic flight to quality buying in response to events in the news, and that suggests the market is trying to return to historic behavior patterns. On the other hand, it seems as if the inflation bubble has been temporarily punctured and replaced with periodic predictions of low inflation or even deflation, and that chases would-be buyers from gold. In looking ahead, the bull camp is also likely to push back ahead of the FOMC meeting decision this afternoon. We seriously doubt the Fed will start tapering, but we suspect they will make it clear they are poised to act, and the outcome is likely to be negative to gold and silver. The Fed is likely to repeat recent claims that asset purchases are only helping the markets on the margin. Given the looming Fed meeting and the likelihood of tapering "dialogue," the gold market should have difficulty regaining $1,784, and silver could have difficulty sustaining above $22.50 until after the meeting has concluded.

With an analyst indicating he sees no end in sight to the global semiconductor shortage, a record net spec and fund net short, and negative chart action, the path of least resistance in palladium remains down. Projections are that the US manufacturers will produce 1.2 million fewer vehicles than expected this year because of the chip shortage. Certainly, the palladium market is oversold, with the spec net short holding near record levels and the market forging a three-day washout of $252. Because of the oversold condition we suggest waiting to sell a rally to resistance in December palladium at $1,959. The next downside target of $1,824 was derived off the weekly charts and a low forged back in June 2020. While continued declines in palladium could make it difficult for platinum to forge gains, that market might have put in a blowoff bottom with yesterday’s aggressive rejection of Monday’s spike and the follow-through gains overnight. A normal retracement of the August and September washout has already taken place, and a rally above the 50% retracement at $959.35 has been forged, and that could propel the market back into the early August and early September consolidation zone above $976.20.

MARKET IDEAS: As of this writing, we leave the edge with the bull camp in gold and silver, but we also caution traders because the sole bullish recently was the prospect of significant uncertainty from the Evergrande situation, and that situation was at least temporarily deflated by news that they avoided default in their recent interest payment deadline. However, a good bull market can transition from one bullish fundamental focus to another, and we are not sure there is a fresh bullish fundamental alternative. We suggest traders sell a rally in December gold to $1,784 and sell a rally to $23.13 in December silver.

The bulls regain control, but control might be temporary. 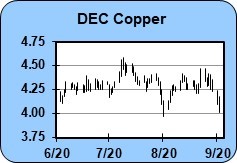 With the Evergrande crisis temporarily placated, Chinese markets reopening from holiday, iron ore prices jumping in China, ongoing declines in daily LME copper warehouse stocks, and positive early global equity market action, the path of least resistance in copper is up to start. Certainly, hawkish mutterings from the US Federal Reserve later today could knock prices back from early gains, but copper likely forged a meaningful bottom with yesterday's spike low. Media outlets are labeling the action in commodities as a "relief bounce," and we agree gains could be temporary. With a significant range down rejection in December copper this week, the $4.00 level appears to have become some form of value. Demand fears have played a significant role in the declines of the last five trading sessions, but those demand fears are tempered by a downtick in US infections on Monday and by the Evergrande move to survive a large interest payment deadline. If the market can get beyond the current economic turmoil without a sustained negative impact, it should leave copper in a bull posture, especially with the latest International Copper Study Group suggesting the world supply and demand has shifted to a 60,000-tonne deficit. On the other hand, the Chinese government is poised to offer another tranche of strategic copper supply to the market, and that could keep prices under $4.26 in the near term.

MARKET IDEAS: The copper market may have found some form of key low with the spike down reversal yesterday. However, a volatility event is facing the market later today in the form of the FOMC meeting. The temporary end to the Evergrande situation and a cash infusion from the PBOC, while not a major euphoria condition, gives the bull camp the edge to start today. However, those with profits on long positions should consider implementing tight profit stops ahead of the FOMC meeting press conference.