The gold market will continue to keep its focus on the Federal Reserve. The recent FOMC meeting statement and updated monetary policy in regards to interest rates have contained any large moves in gold. The net result of a more hawkish Fed has resulted in a major uptick in the yields of 10-year Treasury notes, which is also supportive of the U.S. dollar. This week the Federal Reserve will continue to remain in the news with major speeches by Fed officials, including the chairman as he testifies before Congress. His testimony could shed insight into the central bank's monetary policy and the current response by the Fed to the pandemic.

According to Reuters News, "Gold prices were subdued on Monday, pressured by an uptick in U.S. bond yields and a robust dollar, as investors awaited speeches from Federal Reserve policymakers for clues on when the central bank could taper its pandemic-era economic support."

Concurrently two Federal Reserve members will be leaving the central bank this year and next year, which could be the result of recent information about trading activity and whether or not this was a breach in the ethics in regards to trades by Fed members.

The recent uptick in the yields of 10-year Treasury notes has resulted in the highest yields seen in approximately three months, and higher yields coupled with a strong U.S. dollar have definitively placed pressure on any solid upside move in gold.

Traders are also immensely focused upon what Congress will do in regards to raising the debt limit. The United States Treasury will run out of money by the end of this month and this necessitates raising the debt limit for the U.S. to meet its payroll obligations for government employees as well as interest payments on its debt. The national debt continues to swell and is at just under $30 trillion.

Lastly, gold investors and traders will focus upon U.S. equities and their reaction as to whether or not Congress will "kick the can down the road," and fund a temporary infusion of cash and simply raise the debt limit by enough capital to fund the government throughout October, November, and December. 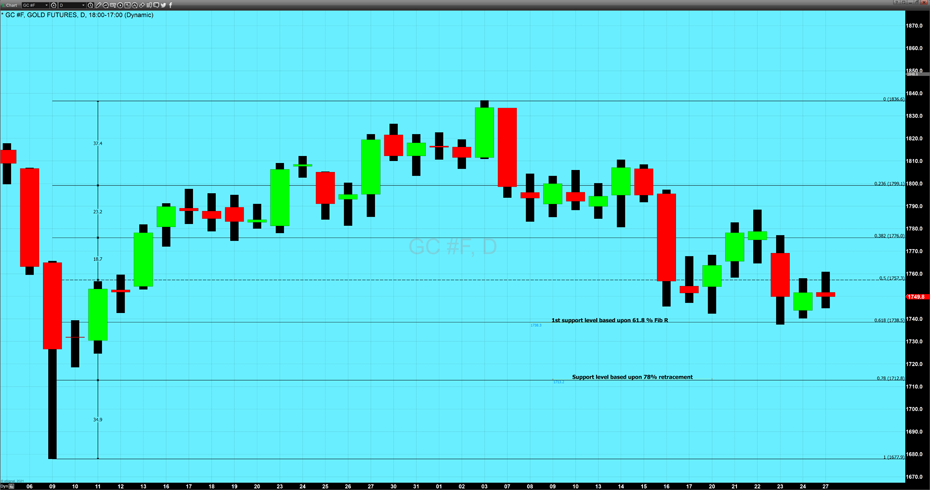 This week investors and traders will focus upon all of the issues above, which could have a strong and dramatic impact on the future of gold pricing as to whether or not it continues to fall or finds support. If real yields on U.S. debt instruments continue to rise, and the dollar continues to hold its value or trend higher, gold will have a difficult time trending higher from its current pricing at approximately $1750. Throughout last week we spoke about a key and critical support level in gold at approximately $1738, and this is the most important support level to watch.

As of 5:17 PM EDT gold futures basis, the most active December 2021 Comex contract is down $1.90 and fixed at $1749.80. As we have spoken about over the last few weeks, there seems to have been a decoupling in the relationship between gold and silver. Today's move in silver further solidifies that observation with the most active December 2021 contract moving opposite to gold, gaining $0.21 (+0.94%) and fixed at $22.635. 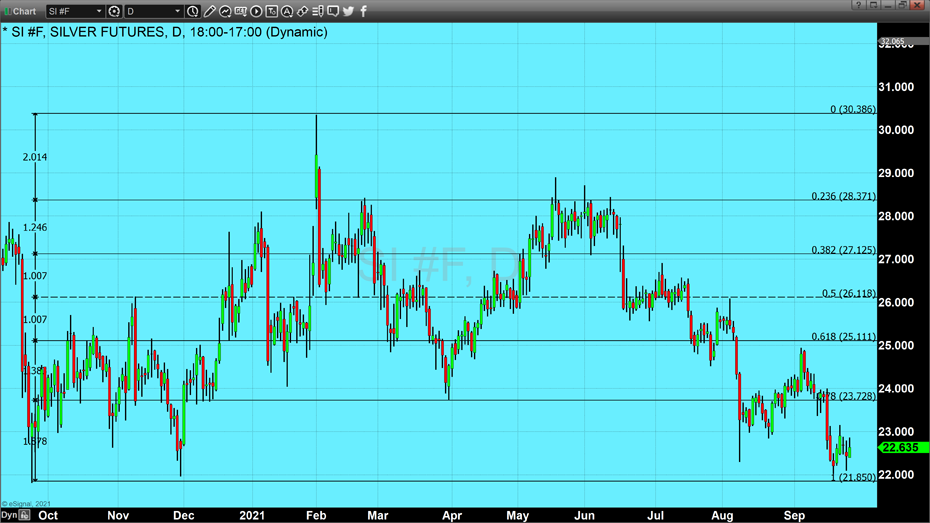