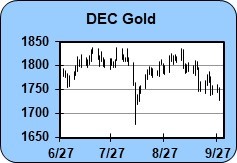 With a fresh higher high for the move in the Dollar Index this morning, the gains in gold appear to be short covering from yesterday's washout. However, gold bulls remain discouraged, as a widening chorus of inflation evidence and spiking US interest rates resulted in a washout in the December contract yesterday that at times approached $25. In other words, gold and silver have not transitioned into a position to benefit from inflation and instead are concerned about sharp increases in interest rates, a surging US dollar and softer industrial demand for copper. However, the inflation threat has not been fully embraced throughout the markets yet, as the Chairman of the Federal Reserve testified in front of Congress that he still sees inflation pressures as transitory. Some economists are downplaying the potential for inflation until they see CPI readings become as hot as PPI. With further gains in Treasury yields today, it is possible that the taper tantrum in equities and physical commodities will continue, with copper falling further. With the recent COT report in gold registering a spec and fund net long of 220,791 contracts, a measure of stop loss selling is likely on any failure of chart support. Critical support and targeting in December gold is seen at $1,727.50, with a trade back above $1,764.60 needed to alter the downtrend. Unlike gold, silver has not ranged down in the face of a taper tantrum, an upside breakout in the dollar, and noted weakness in the gold market, and that suggests value has been found.

While the palladium market has recovered from yesterday's spike down move, a pattern of lower highs and lower lows looks to be extended into another session. Technicians are suggesting that a potential bottom-building sideways consolidation above $1827.50 has resulted in a consistent increase in open interest as though bargain-hunting buyers were moving into the market. Fears of slowing in China are concern to the palladium demand outlook, and the idling of industrial facilities in China due to power shortages should add to economic headwinds and further questioning of demand for auto catalysts. While Elon Musk and the Biden Administration are attempting to speed up the availability of computer chips for vehicles, few hold out hope for a quick revival of global automobile production. Therefore, the demand outlook for palladium remains bearish, and the failure to hold a key pivot point of $1,827.50 could project prices down to the weekly support level of $1,750. The platinum market avoided the aggressive selling seen in the palladium market on Tuesday, but the environment remains bearish with demand views at best being heavily scrutinized. Seeing further taper tantrums in equities and other markets could throw October platinum down to $900.

MARKET IDEAS: We leave control with the bear camp in the precious metals, as the fear of rising interest rates is swirling in the marketplace and dollar strength again this morning has turned up the currency-related pressure on gold and silver. While risk-off in equities could pressure the metals, the primary focal point of the trade in the near term is likely to be the direction of US interest rates. The market could shift its focus away from tapering fears and rising rates, but a full-blown taper tantrum could justify a trade in December gold below $1,706. On the other hand, in the event of a break to $1,706 and the subsequent building of a consolidation above that level could be a significant long-term buying opportunity. We do not trust gold to forge a major bottom yet. 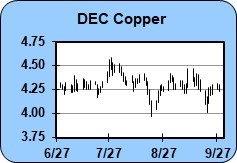 The copper market deserves further corrective action after a four-day rally of $0.30. We see further downside action in copper directly ahead as the outlook for the Chinese economy continues to deteriorate among power outages, surging material prices, and regulatory fears toward the Internet/tech sector. The largest Chinese copper smelters raised third quarter treatment and refining charges to the mining companies 27% from the second quarter. We view that as another inflationary development that could prompt mining companies to hold out for higher core copper prices, which in turn could lead to higher manufactured goods prices down the chain. We would note that daily LME copper stocks have continued to decline significantly. LME and Shanghai copper warehouse stocks combined are becoming an important issue. With the recent COT report registering a spec and fund net long of 24,773 contracts in coper, and with the market gaining an additional $0.19 after that data was collected, we suspect the net long gotten even larger. The potential for stop loss selling by spec longs is high, especially with copper prices again failing to hold the $4.25 level this morning. We also suspect copper will see spillover pressure from other commodity markets if yesterday's tapering tantrum resumes.

MARKET IDEAS: The copper market is vulnerable to further anecdotal signs of slowing in China, especially if Evergrande misses an interest payment today. In addition to an economist downgrade of GDP projections for China, reports of Chinese power disruptions have already resulted in the idling of industrial facilities, and that could mean even more slowing ahead. We see copper prices above $4.31 as expensive and judge the market to be fairly valued down at $4.11.