Copper bull market far from over

Copper has been one of the biggest winners in the commodities market since 2020.

Not only is this red-colored, shiny industrial metal an essential part of our economic growth, but it is also imperative to the global transition towards sustainable energy sources.

China, the world's biggest consumer, has made cutting carbon emissions a priority, aiming to reduce its carbon intensity (emissions per unit of GDP) by more than 65% from 2005 levels by 2030. By 2060, it wants to completely neutralize carbon emissions.

In the US, the Biden Administration has set a goal to have 100% carbon pollution-free electricity by 2035, then carbon neutrality by 2050. The US climate plan would require electric vehicles to make up at least half of the nation's new auto sales by 2030.

Because the EV manufacturing process is copper intensive (in fact, it uses 4x as much copper as a regular vehicle), demand for copper has risen at an unprecedented pace with no signs of slowing down.

Meanwhile, wind and solar photovoltaic energy systems have the highest copper content of all renewable energy technologies, making the metal all the more important in achieving our climate goals.

Research by Fitch Solutions shows that green demand from the power and renewables sector as well as autos will each account for 7.9% of total copper demand by 2030.

As a result of greater energy transition, Fitch forecasts ‘green copper' as a percentage of total copper demand to increase from approximately 5.6% this year to 15.7% in 2030.

Economic growth often comes hand in hand with a rise in industrial activities, and as nations worldwide continue to make a splash on infrastructure investments, there will be more demand for copper and other metals.

According to Cochilco, the copper commission of top producer Chile, global copper demand will reach 24 million tonnes this year, up 2.4% compared to 2020, and 24.7 million tonnes for 2022, a 3% increase.

Driven by robust industrial demand, copper prices surged to an all-time high of $4.77/lb in the second quarter of this year. Compared to its trough of $1.94/lb in early 2016, this represents a 150% rally within the span of five years. 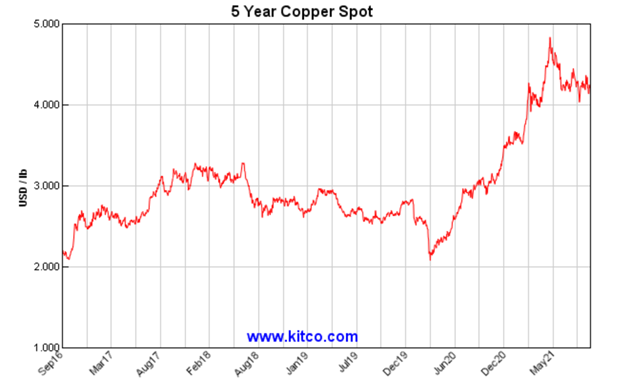 Even though copper — like many other commodities — has somewhat experienced a pullback, the base metal is still sitting at its highest in a decade.

Some of the biggest commodity trading firms and media houses remain bullish on copper given that demand is likely to accelerate during the global energy transition.

“Elevated demand expectations, especially from the push to electrify the transportation sector, together with an absence of new mine investment is likely over the coming years to push the market into a deep and price supportive deficit," said Ole Hansen of Saxo Bank.

Goehring & Rozencwajg, which specializes in natural resource investments, believes that the current cycle will ultimately take copper prices higher, perhaps even above $10/lb. Justifying this aggressive price target, the New York-based research firm referenced copper's last great rally, which saw the metal grow seven-fold from its 1999 bottom of $0.61/lb to $4.57/lb in 2011.

“Our models tell us the fundamentals are much better today than they were during the last bull market. Copper stocks have been strong performers as well. The average copper mining stock, as measured by the COPX ETF, is up nearly 100% year-on-year and 20% year-to-date," Goehring & Rozencwajg wrote in their latest market commentary.

It also argued against the bearish case that economies such as China have been overconsuming copper, pointing out that such a conclusion is drawn by comparing a nation's copper consumption with real GDP.

Instead, using a “cumulative installed copper vs. GDP" metric, the report finds that “China may need to consume nearly 75% of global supply to install enough copper to support a nascent middle-income economy."

The Goehring & Rozencwajg report also pointed out that recommendations on copper investments have focused primarily on these bullish demand trends, and the supply side of the equation has only begun to be factored in.

“While we believe the demand side remains extremely bright, we continue to think the next leg of the bull market will come once investors realize the widespread supply challenges ahead," it wrote.

The Covid-19 pandemic has already had a notable impact on global copper production due to labor disruptions and mine shutdowns, resulting in copper mine supply 80,000 tonnes short compared with the previous year. Things are expected to return to normalcy this year, so 2020 will likely be just a slight bump on the road.

However, the real concern lies in the inevitable depletion of existing copper mines — a problem that has been brewing in the industry for over a decade.

A dearth of new copper discoveries and capital spending on mine development in recent years means that once an existing mine becomes exhausted, its output may not be replaced in time to meet a growing demand. 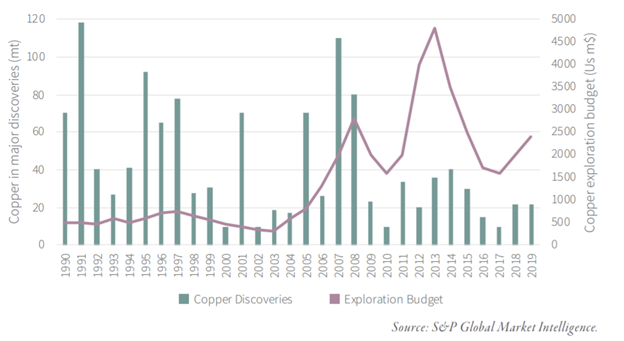 Moreover, since 2000, most reserve additions have come from simply lowering the cut-off grade and mining lower quality ore as prices moved higher (i.e. Chile's Escondida copper deposit), a practice that may not be feasible for geological reasons in the upcoming cycle, as Goehring & Rozencwajg argues.

Although there will be new projects coming online around the globe (DRC, Panama and Mongolia), these will only offset depletion at other existing mines, leading to a stagnant overall mine supply growth.

It's also important to note that two political events that occurred in Q2 2021 could negatively affect copper supply moving forward.

In Peru, the new leftist government led by Pedro Castillo is seeking to impose a 70% tax on copper mining profits, which would discourage further spending on existing and future projects.

Following Peru's lead, Chile has also proposed legislation that would see copper mine profits taxed at 75%.

While these new mining taxes have not yet been enacted, they are quickly gaining support in Peru and Chile – the first and second largest copper producing countries respectively.

“Our research strongly suggests that supply growth, which has been minimal since 2016, will continue to disappoint," the Goehring & Rozencwajg report said.

As such, Acuity Knowledge Partners, formerly part of Moody's Corp., is predicting a widening demand-supply gap that could reach as high as 8.2 million tonnes by 2030.

This is why, despite a lukewarm market over recent weeks, investors are continuing to monitor and take positions in copper equities. Shares outstanding of the COPX are up 319% so far this year and 640% compared with the same time last year, as investors have rushed into the space.

Mining companies holding high-quality copper assets will continue to hold appeal to investors, more so after the recent period of consolidation that has presented an attractive entry point.