Yesterday's (Friday's) release of the stunningly weak StateSide September payrolls data momentarily towed Gold off the mat, (emphasis on "momentarily"). Here's how it looked, price pre-report at 1763 before swiftly climbing to 1782 -- a 13-day high -- only to give it all back post-report and then some in less than two hours. Blame it on the M word? "Well, we can't have Gold up there, no...":

Manipulators or otherwise, Gold could not stand up to September's net payrolls creation of just 43% of the amount expected. Indeed this August-to-September payrolls slowing was the fourth-worst for that specific calendar stint in the 24-year history of our Economic Barometer. But: the "dramatic" Unemployment Rate drop from 5.2% to just 4.8% made for fine FinMedia spin and added to the Econ Baro's recent strength as we'll see herein.

Regardless of Friday's "one-day-wonder-spike-and-counterstrike", untowed Gold of late reminds us of its wallflower state of which we'd written back in both 2015 and 2019. Remember the "wallflower" at the dance in the high school gym? These relatively narrow trading days for Gold finds it with nary an invitation to dance as the other primary BEGOS Markets whirl 'round the wooden floor. The Bond is diving, the Euro dying, Oil is flying and the S&P still impossibly driving. By the way: how's that "live" S&P 500 price/earnings ratio of 49.7x workin' out for ya? "Has the S&P crashed yet?" Nope.

And yet to view the BEGOS Markets' ways across the last 21 trading days, 'tis really been "nuthin' but Oil", its 13% rise from just one month ago-to-date making the balance of the bunch appear bland. Oil topped 80 on Friday for the first time in nearly seven years; but does that mark Oil's sunset ... or its sunrise to 90? Recall (should you be a member of the All Gaps Get Filled Club) there was a "volume gap" back in 2014 as price plunged from 90 to 80. Either way, here is the past month for the BEGOS bunch: 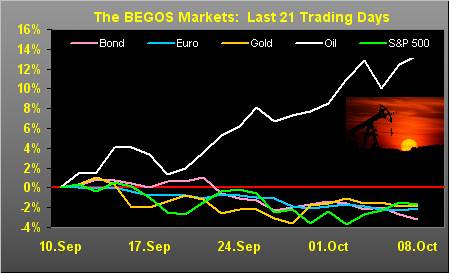 Still, specific to Gold, our "wallflower" references made in the past have then (coincidently or otherwise) seen higher price levels; (how's that for an abstract analysis). For after labeling Gold as a wallflower back in '15, price six days later was 3% higher. Were same to now occur following Gold having settled the week at 1757, we'd soon see price above 1800. Moreover, following the wallflower reference from '19, Gold three weeks hence was 4% higher, which from today would not only find price at 1827, but likely knocking on the door (finally) to flip the weekly parabolic trend from Short to Long. Such present Short trend has been in place these past 15 weeks (a tie for seventh-longest since 2001), but the net change in price hardly is negative. Thus, (the M word crowd notwithstanding), let's cue " Time's A-Wastin' " --[Ellington, '53]: 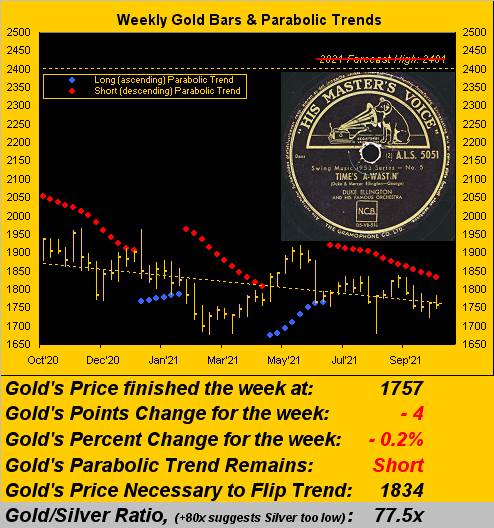 As for the aforementioned Econ Baro, here 'tis:

The M word aside, firming in the Econ Baro is a mitigant against higher Gold prices, (if we ignore the 3Ds of Debasement, Debt and Derivatives). 'Course history shows that 1) Gold tends to catch up to those three deceitful wealth destructors, and 2) it can happen very quickly.

Indeed, further fundamental follies favouring Gold include Congress coming through in the nick of time to raise the debt ceiling (which in so doing we've ad nausea addressed as a declaration of default) and which they'll try to do yet again before year-end. And how about this, per Dow Jones Newswires: "Mortgage Payments Are Getting More and More Unaffordable" ... Anybody remember 2008/2009? Oooh, and another here's one from just a week back: Minnesota FedPrez Neel "Carry Cash" Kashkari perceives the short end of the yield curve lingering 'round 0% for a few more years! Query: "Got Gold?"

But wait, there's more: As you know, Q3 Earnings Season is underway -- and yes with but four of the S&P's 505 constituents having reported -- 'tis far too soon to express any substantive stance. However, we tend to notice little things like this. Question: of the four S&P companies having thus far reported, how many improved their Q3 bottom line over that of a year ago? Must be all four, right? After all, COVID was wrecking it all back then. Answer: one. In fact, by the website's Earnings page, for the 12 companies overall having thus far reported, just five have done better. To be sure, the Big Names have yet to weigh in, but this Season's start hardly is auspicious. Just sayin'...

As noted, attempting auspiciousness on the payrolls report was Gold, only to see price then quickly fold. 'Tis annoyingly there per the rightmost bar in the lower left panel per our three-month view of price; nevertheless encouraging are Gold's ascending baby blue dots of linear regression trend consistency which would be welcome to pull wallflower Gold up over the wall at 1800. Then in the lower right panel of price's 10-day Market Profile is the critical line in the sand at 1759: first get Gold back above that and it ought then be good to go, (barring the disciples of the M word having anything to say about it):

So too for Sister Silver we've a like picture, with her rising "Baby Blues" (below left) and even better Profile positioning (below right). 22.50 is the line above which Silver can stay fine:

¦ From the wee state of Massachusetts, Senator Elizabeth Warren has weighed in on the recent, well-documented stock selling activity of two "resigning" FedPrez, pointing to their "atrocious judgment" within the private Federal Reserve System's "culture of corruption" and that its Chair Powell has "failed as a leader". Apolitically with our highest regard and respect to the honourable Lady and her justified First Amendment right, do our intelligence a favour: shut-up.

¦ Meanwhile well within the bowels of such corrupted culture one finds FedGov Lael "The Brian" Brainard, her role of choice this past week being assessor of climate-related financial risks and their "profound consequences" upon the markets and economy. So let's see: the S&P at this level (4391) lacks (understatement) substantive earnings support, even as low-to-high this past week the Index rose +3.5% ... but now apparently climate change could wreck it all.

Good one there, Squire, as opposed to our anticipated "Look Ma! No Earnings Crash". Either way, they'll ultimately have to blame something. "Bartender? Make that a double crash..."

¦ Finally, barring your living in a cave, (although we do have a least one valued reader out there who lives in a yurt), this past Monday upon Faceplant et alia "going down", we with wild curiosity raced across the quote screens to see if bits**t had also vanished. Nope, at least not this time. ("Tick tick tick goes the clock clock clock...")

But don't you get clocked: get bold with some Gold before 'tis towed past affordability mode! 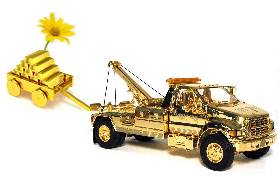