For the first time in six weeks, gold has flirted with $1800 per ounce. The last time gold effectively challenged $1800 was during the week of August 23, when gold opened at $1780 and then closed at $1820. On the week of August, 30 gold traded to a high of $1837 and closed at $1820. On the following week, gold would break below $1800 per ounce with prices remaining below that key level for the next six consecutive weeks. Chart 1 is a weekly Japanese candlestick of gold futures and highlights the price points mentioned above. 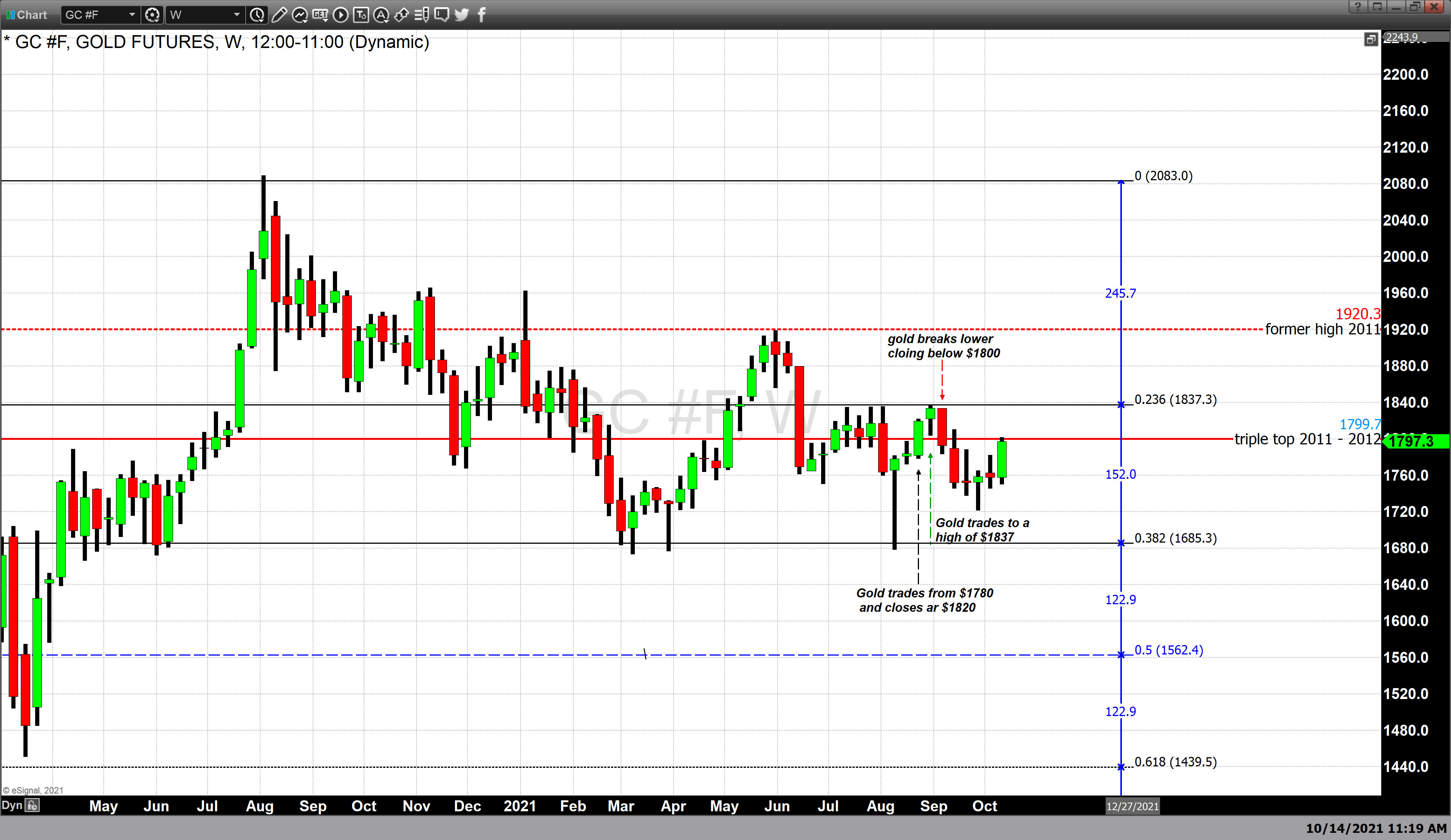 As of 5:20 PM EDT gold futures basis, the most active December 2021 contract is up $2.60 and fixed at $1797.30. The purpose of today’s article is to put current pricing into perspective based upon long-term studies which highlight key and important price points that have acted as both support, resistance and all-time highs.

Chart 2 is derived from the same weekly Japanese candlestick study and highlights current pricing, including today’s high just above $1800. However, we have compressed the chart so that price action from 2011 is visible. Current highs at $1800 and their relationship to a triple top that occurred first during the last week of October 2011, on February 13, 2012, and finally during the week of September 3, 2012, are clearly defined. 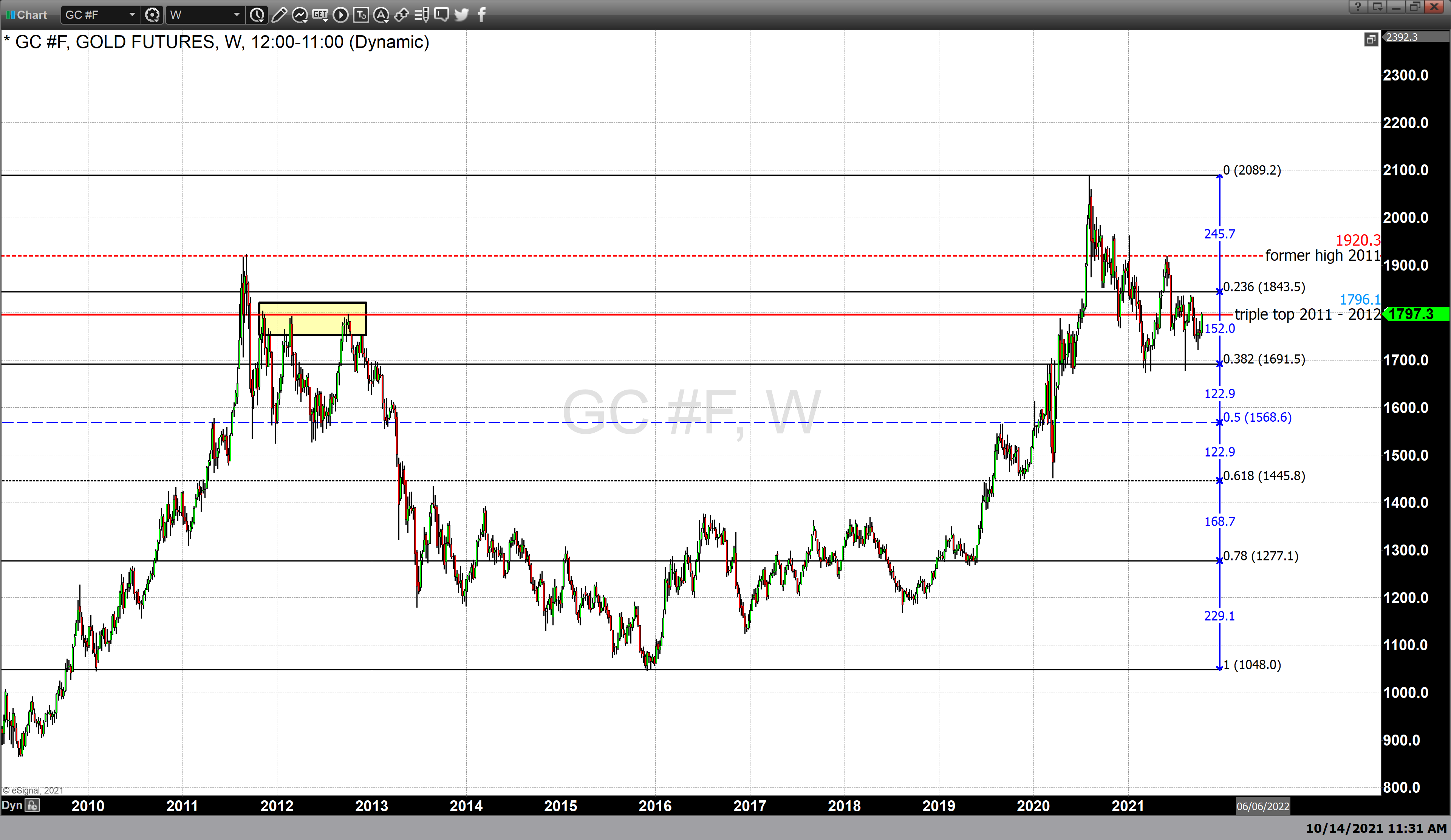 With that in mind to put current pricing in perspective currently just below $1800 shows that this price is an area of resistance just as it was back in 2012. However, an effective break and close above $1800 would effectively change the label of $1800 as resistance and would be now looked at as a current level of support.

If gold can close above $1800 the next real level of resistance would occur at approximately $1843. That is based upon a Fibonacci retracement that begins at the lows gold hit in 2015 ($1040) and ends at the all-time record high of August 2020 when gold traded to $2088 per ounce. $1843.50 represents the 23.6% Fibonacci retracement. Chart 3 is a weekly candlestick chart with the Fibonacci retracement data set mentioned above. 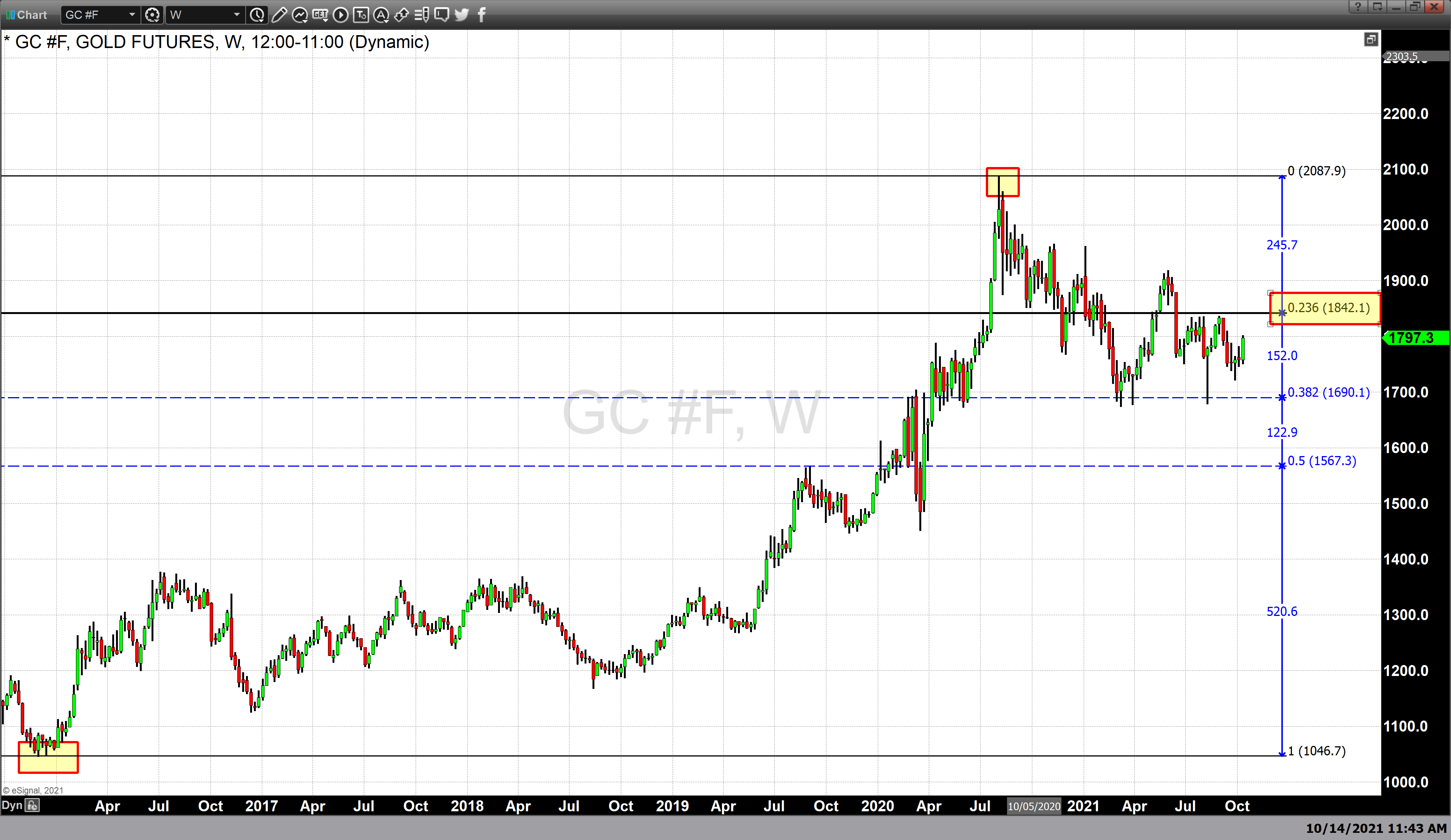 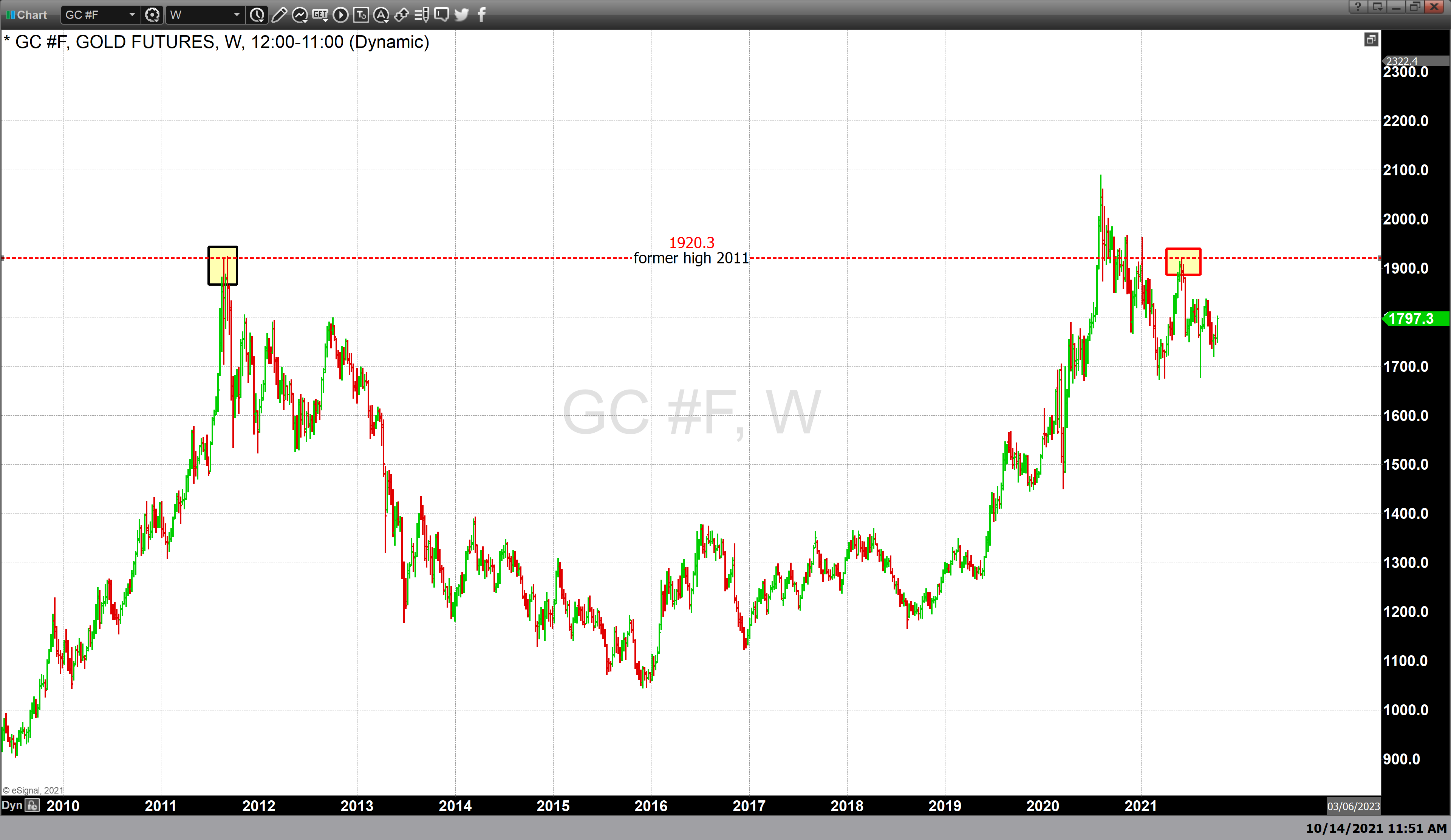 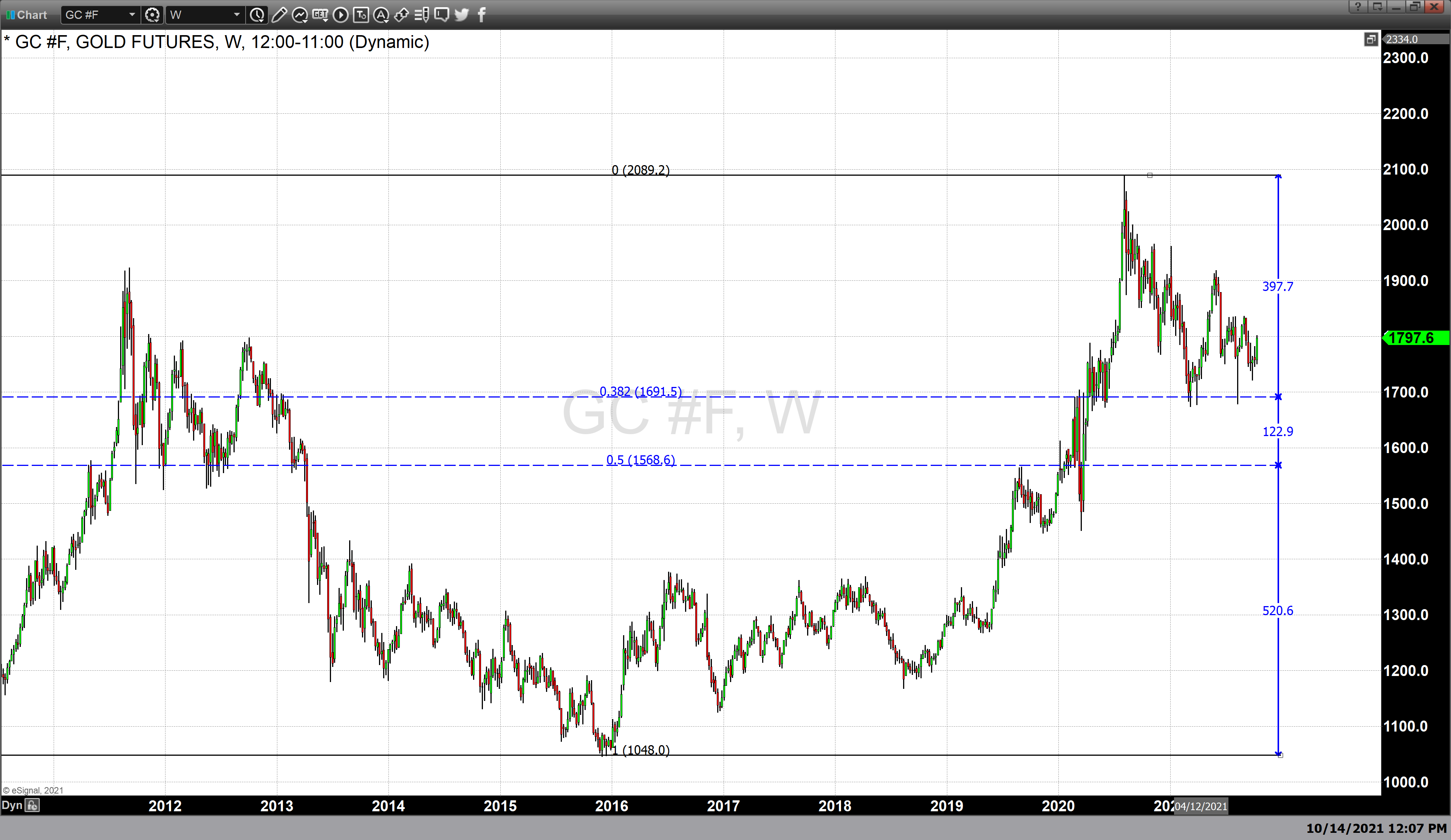 Should gold prices find resistance at $1800 insurmountable and begin to retrace the absolute key level of support it needs to hold is based upon the triple bottom at $1680. If gold does move to that price point and trade lower it could have a similar major selloff like the one that occurred in April 2013 when it broke below $1537 and traded to a low of $1040 at which point gold pricing found a bottom.