A combination of events collectively has put tremendous bearish pressure on gold pricing. At least for today, the combination of all of these events has resulted in a perfect bearish scenario causing a $30 drop-in gold futures. As of 5:10 PM EDT, the most active December 2021 futures contract is currently fixed at $1768.10, a net decline 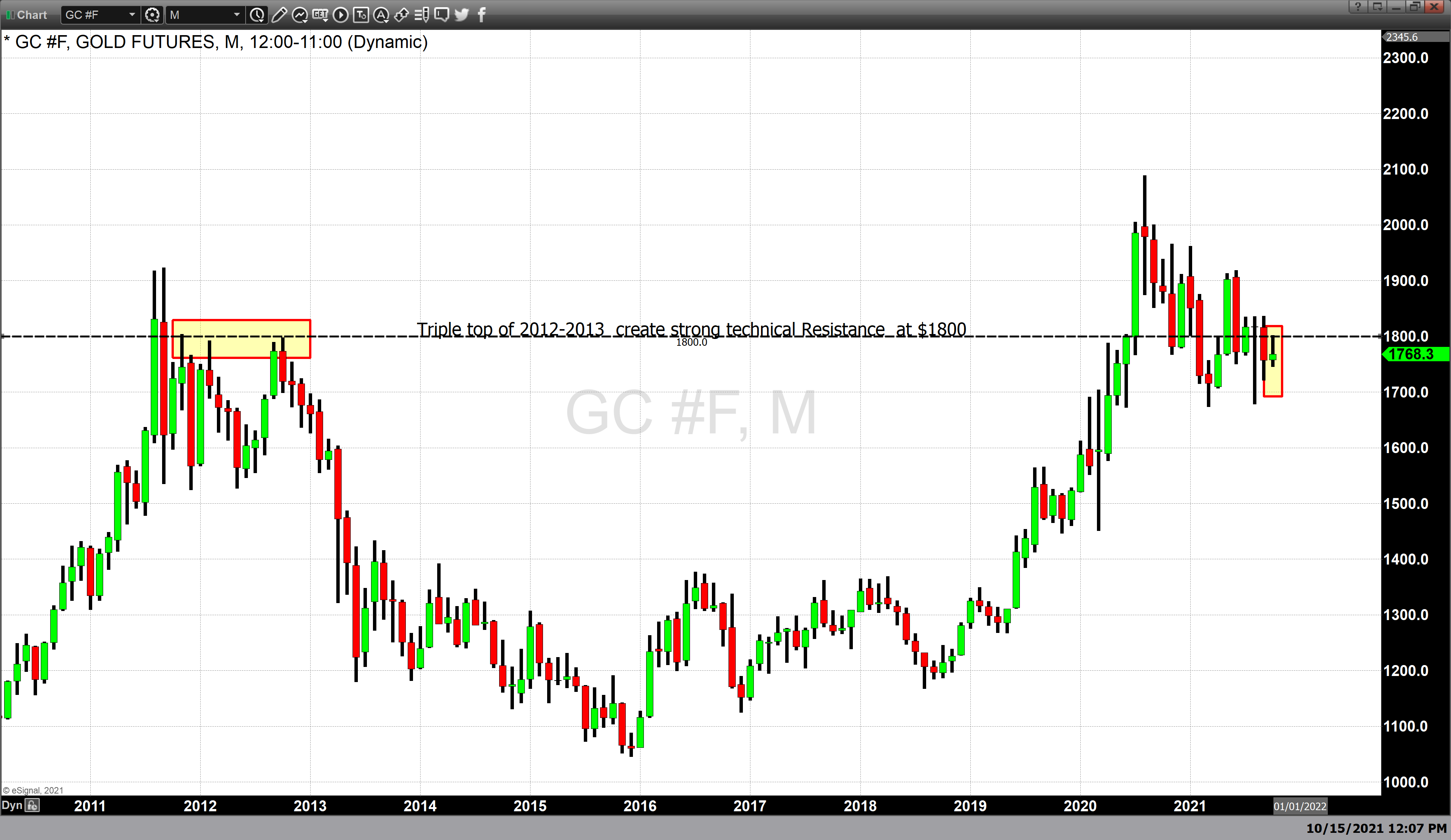 Philip Streible, the chief market strategist at Blue Line Futures, summed it up, “gold has everything going against it. Real rates are rising; equities are moving higher, so is bitcoin.”

Market sentiment regarding upcoming changes in the Federal Reserve’s monetary policy has continued to weigh on gold pricing. Market participants expect the Fed to begin to taper their monthly asset purchases of $120 billion as early as next month. Recently, the statement from the last FOMC meeting was released, clarifying the size of tapering each month. The Fed has discussed tapering $15 billion per month, divided between U.S. debt instruments (10 billion monthly) and mortgage-backed securities (5 billion monthly). The recent statement was the first time we got any discussion of the pace at which taper.

On the surface the tapering process still leaves the Federal Reserve’s asset balance sheet at over $8.4 trillion. Tapering will reduce additional purchases over time, but their asset sheet will be just shy of $9 trillion at the end of the tapering process.

Members of the Federal Reserve with a hawkish demeanor will use recent data regarding the September retail sales report to accelerate the date in which they will begin to taper. Economists polled by Dow Jones were forecasting that retail sales would actually decline by 0.2% from August. The actual numbers came in as a gain of 0.7%.

One direct result of the market sentiment convinced that the Federal Reserve would begin tapering as soon as next month is that yields in U.S. debt such as the 10-year Treasury note have seen yields once again rise. Currently, the 10-year note is yielding 1.574% interest. This makes gold pricing cost more to foreign investors, and as a fixed income asset becomes more attractive to investors worldwide.

The strong performance in U.S. stocks today was another factor adding to the bearish sentiment for gold. The Dow gained 1.09%, and after factoring in today’s gain of 382 points is currently fixed at 35,294.76. The S&P 500 gained 0.75% and lastly the NASDAQ composite gained 0.50%. Rising U.S. equities continue to create bullish market sentiment for that asset class.

Lastly the price of Bitcoin futures surged today up +8.57%, and after factoring in today’s gain of $4985 has taken the value to $63,180 per point. But that’s only the tip of the bitcoin iceberg. The education office of the U.S. securities exchange commission sent out a tweet yesterday inferring that they will approve an ETF for bitcoin futures as early as next week. The tweet included a link to a June bulletin containing a risk disclosure statement for an Electronically Traded Fund for bitcoin futures. Many believe yesterday’s tweet and the link to the June bulletin by the S.E.C is an announcement that they will soon approve a Bitcoin ETF. 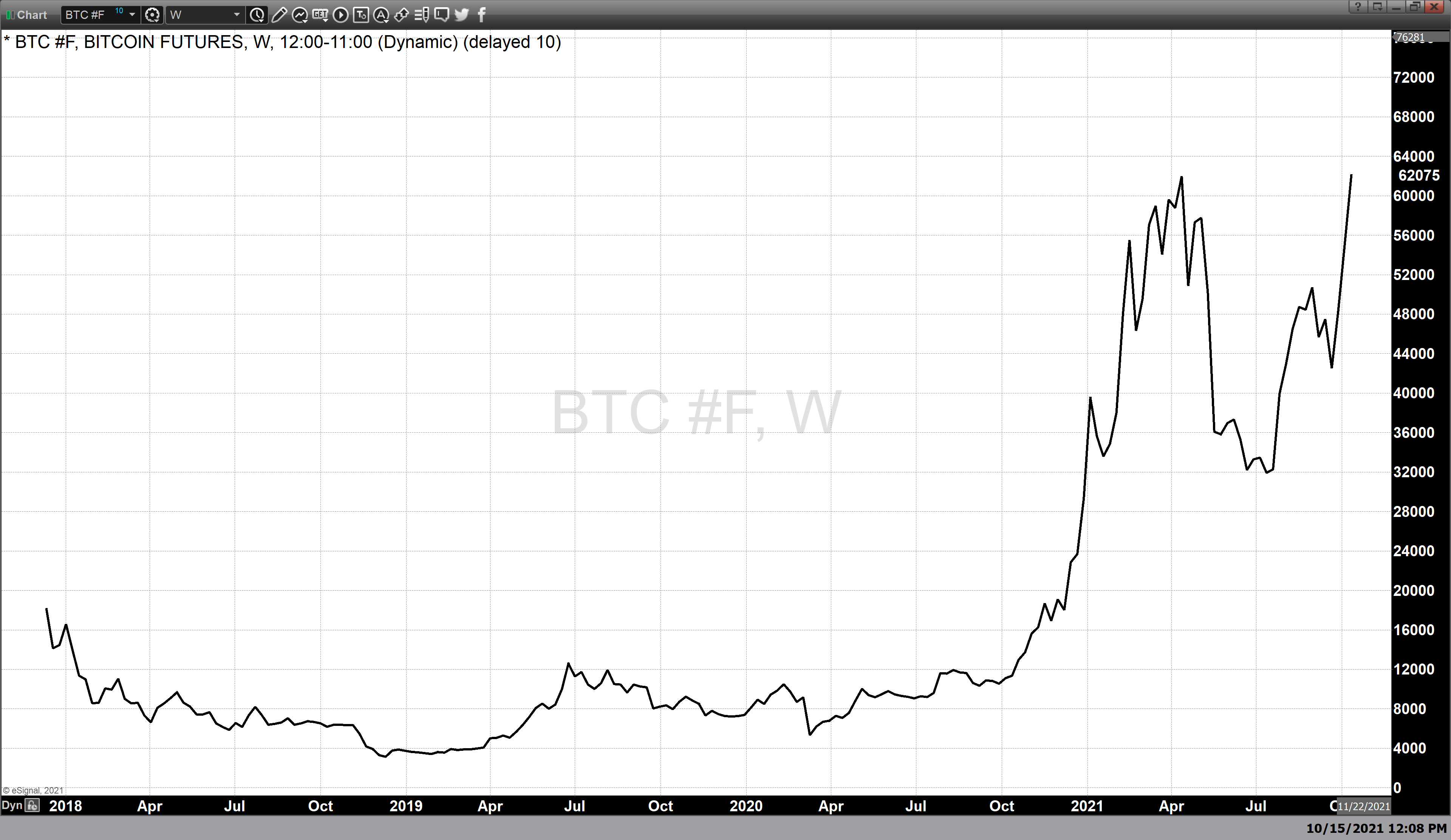 According to Bloomberg News, “The Securities and Exchange Commission is poised to allow the first U.S. Bitcoin futures exchange-traded fund to begin trading in a watershed moment for the cryptocurrency industry, according to people familiar with the matter.”

Any of the components or events mentioned in this article would directly result in making gold less attractive as an investment vehicle or inflationary hedge. However, when you have so many factors creating bearish market sentiment for the precious yellow metal, the effect is cascading selling pressure, which we saw today.