In real estate many agents and investors say the three most important things to the value of a property are location, location, location. A similar case can be made for gold with one of the keys and most important elements to price changes being inflationary pressures. Today it was concerns about inflationary pressures that took gold moderately higher. While a weaker dollar did provide some tailwinds adding to today's gains in gold, the dollar was only down by 0.128 points, or -0.14%, and fixed at 93.60.

Exactly one week ago, on October 13, the U.S. Bureau of Labor Statistics released the inflationary numbers for September 2021 vis-à-vis the Consumer Price Index. The report indicated that the CPI for all urban consumers (CPI–U) increased by 0.4%, which came in 0.1% above forecast by economists. This means that over the last 12 months collectively, all items in the index increased by 5.4% before seasonal adjustment. The components of the inflationary index that had the greatest rise were food and energy costs. The food index rose 4% over the last 12 months, and the energy index rose over 24.8% over the last 12 months.

The current inflationary rate has risen on a year-over-year basis to the largest increase since July 2008. In June and July 2021, the CPI rose to 5.3%. Inflationary pressures began rising in November 2020, largely due to the reopening of the economy. This led to greater consumer demand and supply chain bottlenecks or constraints. 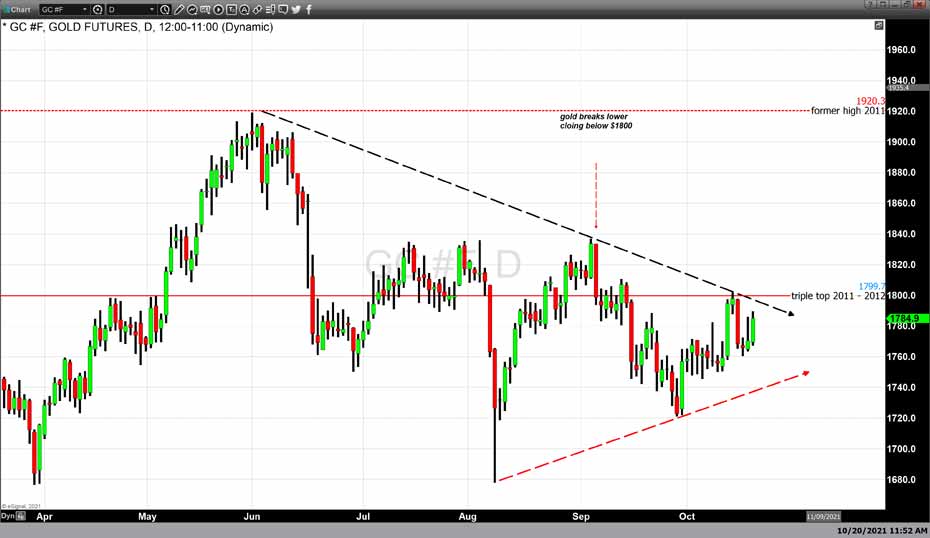 However, many analysts and economists believed that much of the inflationary pressures would be sustained and could lead to a major threat to the U.S. markets and economy. Today one of the top hedge fund managers and billionaire Paul Tutor Jones in an interview with CNBC, expressed his concerns about the current level of inflation.

The billionaire hedge fund manager stated that his belief is that inflation is here to stay, and more alarming is that it poses a major threat to the United States markets and economy.

"I think to me the No. 1 issue facing Main Street investors is inflation, and it's pretty clear to me that inflation is not transitory. It's probably the single biggest threat to certainly financial markets and I think to society just in general."

He correctly assesses the current inflationary pressures as a result of the trillions of dollars in fiscal and monetary stimulus that was used to first to end the recession that was a direct result of the pandemic and then to aid in the economic recovery of the United States.

One of the most alarming predictions he made is that price pressures will continue to rise. Considering that inflation ran to a 30-year high in September. This means that most likely the Federal Reserve will take steps to temper inflationary pressures. Although there are not many tools that the Federal Reserve has in its toolbox to combat rising inflation their go-to tool is raising interest rates. This is the primary reason that initially high inflationary pressures will be a bullish influent on gold prices but later could have precisely the opposite effect.

How inflation is a double-edged sword for gold

This brings us to the double edge sword of inflationary pressures. Initially the dot plot that was presented by the Federal Reserve during the height of the pandemic inferred that there would be no interest rate hikes through 2021, and 2022. It is now believed that there will be two rate hikes in 2022 to help temper and reduce the record-high inflationary level. As interest rates are raised, gold becomes less favorable as a fixed-income investment such as U.S. debt becomes more favorable.