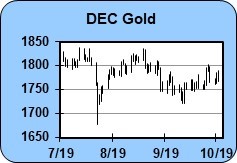 The rallies in gold and silver on Wednesday were very impressive, especially with the dollar not making a fresh low for the week. However, it should be noted that the Dollar Index did make a new low for the week overnight and hit its lowest level since September 28. It is also possible that inflationary dialogue from legendary investor Paul Tudor Jones prompted buying of both gold and silver yesterday. According to Jones, the Fed needs to act now, or it is possible that inflation sentiment will become unanchored and that if the Fed gets behind the inflation curve it could result in surging inflation. Jones also suggested that if the Fed gets caught removing the punch bowl too late, they may be forced to act much more aggressively than they would have liked. Jones also suggested he sees Bitcoin as a viable instrument and suggested that it has won the near-term battle with gold as an inflation hedge. On the other hand, the dollar looks vulnerable to lower action ahead. The US daily infection count registered its lowest weekday infection rate since July 20 on Monday, which result in even more flight to quality premium being removed from the greenback. Given all the fits and starts of the gold market and its inability to build on gains, it needs to prove itself a hot commodity with the trade above $1,802. Silver looks significantly more powerful on its charts than gold. While silver will likely see support from a softer dollar and higher gold prices, it could also rally without assistance from those markets, as it could find support from its role as a classic physical commodity facing increased demand. On the other hand, it should be noted that silver ETF holdings have seen significant outflows recently in the face of significant futures price gains.

The PGM markets showed significant divergence yesterday, with platinum strong and palladium weak. The palladium market was undermined by news that Russian Norilsk estimated that its third quarter palladium output increased 9% from the second quarter. Anglo-American Platinum LTD overnight indicated that refined PGM production and sales volumes were likely to be unchanged from their initial outlook of 4.825 million ounces, which leaves the supply condition neutral to slightly negative. Traders should remember that the most recent positioning report showed palladium having a near-record spec and fund net short level. Which should discourage aggressive selling. Critical support in December palladium is seen at $2,005 with the top of the range pegged at $2,205. Platinum market tracked positive yesterday but remained within a recent tight trading range defined by $1,064.20 and $1,034.80. The positioning report showed platinum with a spec and fund net long of 17,757 contracts, which is 60,000 contracts below the record high from January 2020. Therefore, the platinum market retains significant buying capacity but lacks the fundamental story to breakout and run higher.

MARKET IDEAS: While the bias is up in gold and silver, the markets have a poor track record of extending gains over several days. However, a very low US daily infection rate for Monday followed up by another low reading on Tuesday is pressuring the dollar, and that could ignite a wave of currency-related buying in the metals later today. The gold market’s spec and fund net long position is only half of its record high spec, indicating the market retains plenty of speculative buying capacity. We see the gold market proceeding to the top of the trading range up at $1,801.90 and December silver extending on the upside to $24.90. 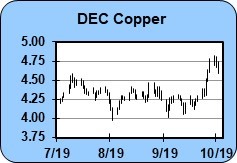 The main story operating in the trade is the potential that the London Metals Exchange may not have enough copper in warehouses to meet warrant/delivery commitments. With a 6,100-tonne decline in warehouse stocks overnight, they have fallen to their lowest level since May 2009. With a massive 15.5-cent trading range on Wednesday and a firm close (the highest since May 11), the bull camp looks like it has regained control. In addition to strength in other inflationary commodities like crude oil, precious metal, and grain prices, the copper market likely benefited yesterday from new all-time highs in various US equity market measures. While the International Copper Study Group pegged the world refined copper market in July to be holding a 31,000-tonne deficit, they also pegged the January through July deficit to be 138,000 tonnes, and those deficit readings might have ignited bargain-hunting buying around the lows yesterday. In a very minor bullish development, the US government has apparently moved to block a copper/nickel mine in Minnesota. From a technical perspective, the October rally in December copper has seen a dramatic increase in open interest, which might suggest new record highs are in store. However, in the event of new record highs, traders should be on the lookout for a fresh Chinese strategic copper stockpile sale.

MARKET IDEAS: The bias is up, but the risk to longs is quite substantial with prices sitting nearly $0.74 above the October lows and seemingly stalling with a series of closes below the $4.75 level. However, LME copper exchange stocks continue to decline, and there are reports that a very large portion of copper on warrant at the exchange is held by a single entity, which could facilitate a short squeeze. If that happens, prices could quickly shoot through all-time highs.