The pandemic will cease to be a problem at some point. It will leave the world with other problems though, and they could be supportive of gold.

Maybe it's not the best timing, given the spread of the Delta variant of the coronavirus, but let's be optimistic and assume that we will soon leave the epidemic behind us. It goes without saying that the pandexit, or the exit of the Covid-19 pandemic from the world, is believed to be positive for the global economy.

However, even if the pandemic ends, it will leave the world with many risks. As Agustín Carstens, Bank for International Settlements General Manager, has recently noted, "policymakers still face daunting challenges as we exit the pandemic".

The first threat is, of course, that the pandemic won't end anytime soon, as new variants could emerge, entailing further lockdowns, as well as monetary and fiscal stimulus. I cannot exclude it, but my bet is that the economic impact of new strains will be smaller, as people will be better adapted to the epidemic, while sanitary restrictions will be softer because people will be vaccinated and fed up with lockdowns.

The second risk is that inflation could rise further or turn out to be more persistent than expected. I analyzed this threat thoroughly earlier in the Gold Market Overview, so I don't want to write too much about this issue here. However, I would like to point out that if high inflation persists, inflation expectations could become more "backward-looking" and increase more than anticipated. The central bank claims that inflation expectations remain well-anchored, as it enjoys anti-inflation credentials.

But the longer high inflation persists, the higher the odds that the central bank will lose its reputation when inflation expectations de-anchor. At some point, people will question the "transitory" character of inflation and increase their expectations. Why wouldn't they, given that the Fed is openly telling that it has changed its inflation targeting regime toward one more tolerant of inflation above the target? The August 2020 Survey of Consumer Expectations published by the New York Fed is illustrating my point. The report shows that one-year and three-year consumer inflation expectations rose to new highs of 5.2% and 4.0%, respectively (see the chart below). What's important, both increases were broad-based across age and income groups. Well-anchored, huh? 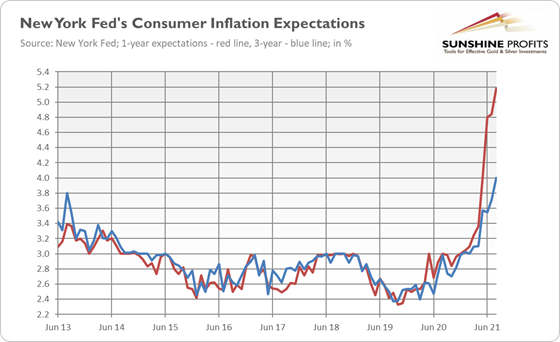 The third risk is the accumulation of debt. Private and public debts were very high already before the pandemic, but they surged even further since all this happened. In the second quarter of 2021, global debt rose to a new record high of $296 trillion, while the US total public debt increased to about $29 trillion, as the chart below shows. In relation to the GDP, the debt has moderated somewhat, but it remains much higher than before the pandemic. Such high indebtedness reduces the financial capacity to respond to new economic shocks in the future and raises the odds of debt distress, defaults, or even a full-blown debt crisis. 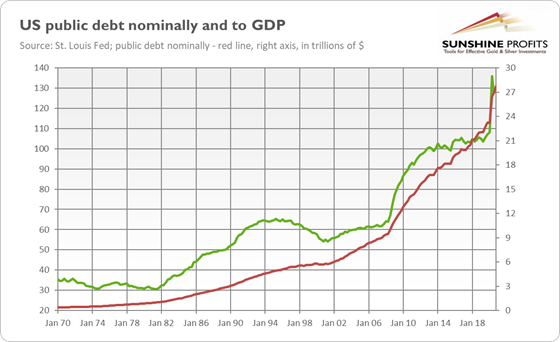 Excessive indebtedness not only entails risks on its own but also complicates the normalization of monetary policy. Although there is a mammoth pile of public debt, the burden of the costs is manageable because the interest rates are at ultra-low level. However, if the central bank hikes them, the debt-servicing costs will increase, upsetting the government. Importantly, the median maturity of the US government debt has effectively shortened, so the changes in short-term interest rates may be even more challenging for Uncle Sam. Let's do some math. Given that the public debt is around 125% of the GDP (see the chart below), every percentage-point rise in interest rates implies 1.25 percentage-point growth in the fiscal deficit as a share of the GDP. I bet that the government won't be happy seeing that.

What does it all imply for the gold market? Well, even if the pandemic ends (and we are still far from it), our economic problems won't disappear. We won't go back to the pre-pandemic normalcy, as the conditions are completely different. First of all, the debt and inflation are much higher. This creates a particularly unpleasant combination. You see, if inflation is not kept in check relatively early, the Fed most likely will have to jack up the federal funds rate to beat inflation later. The problem is that aggressive monetary policy tightening could boost the risk premiums and exacerbate debt problems, possibly even leading to a financial crisis.

Given all these risks, it seems unlikely to me that gold could get out of favor. However, these risks don't have to materialize, and even if they do – I believe that we haven't seen the full economic repercussions of the pandemic yet – it won't happen tomorrow. So, it might be the case that gold will suffer first due to a shy tapering of quantitative easing, only to rally later in response to inflation and/or debt crisis.