If inflationary pressures remain high where could gold pricing go to in 2022?

Market participants might have been numbed by the government's release of the October inflation rate which came in well above economists polled by the Wall Street Journal. However, the same market participants have seen prices rise dramatically over this last year especially energy and food costs.

The inflationary rate increased by 0.9%, well above the 0.6% prediction by economists. More alarming, last month’s dramatic inflationary rise amounted to a year-over-year rate of inflation of 6.2%. This is the first time since November 1990 that Americans have seen inflation spiral so out of control.

The Federal Reserve, as well as the current administration, are still toeing the line that the recent surge in inflation is transitory, temporary, and will decline over time. While the Fed has acknowledged that the current rate of inflation is much greater than anticipated and that it will persist for much longer than originally projected.

They have been emphatic about the fact that the vast majority of inflationary pressures are due to labor shortages and supply chain bottlenecks that are the result of an economic recovery leading to extreme pent-up demand. The Federal Reserve and the current administration are also emphatic about the fact that inflationary pressures will normalize by the middle of 2022.

However, many analysts including myself are also emphatic in the belief that recent rises in inflationary pressure will remain much longer than the Federal Reserve is forecasting. Ask any consumer who has been witnessing extreme rises in the costs of goods and supplies and they might say; persistent is the new transitory in regards to inflation.

My last two articles have been focusing upon a short-term and interim term price target for gold. These technical studies concluded that gold would trade above $1835 by the end of 2021. While I was correct in that we would see gold trade that high this year, the timeline to achieve that goal was greatly accelerated when the current inflationary was released this week. Our studies are currently forecasting that gold prices will challenge $1900 per ounce by the first quarter of 2022. 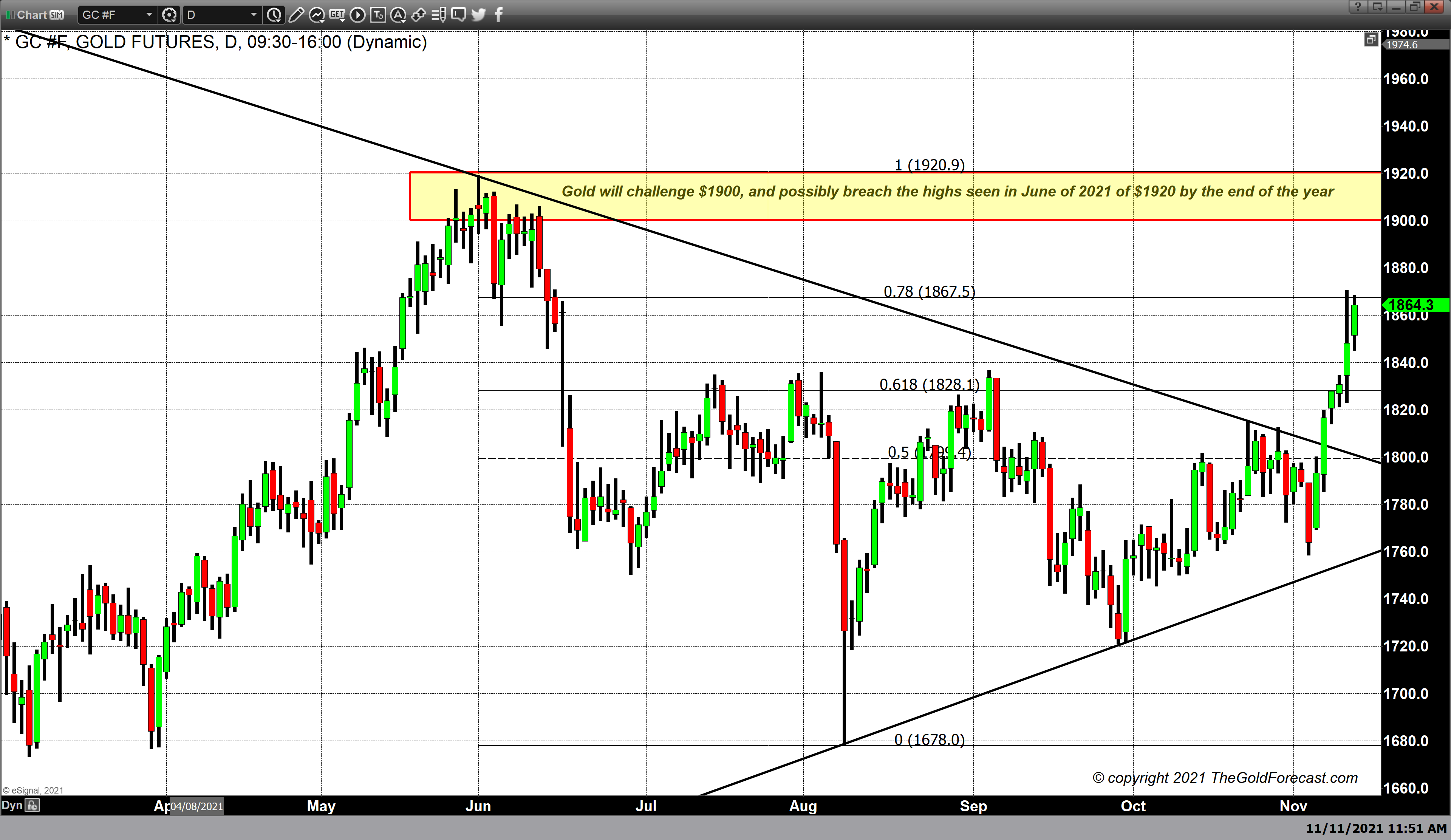 However, these studies were created before October’s inflationary numbers indicated that the level of inflation has not been seen since 1990, roughly 31 years ago. This is why the studies have been modified taking into account the inflationary rate of 6.2%. It now seems plausible that gold could easily challenge $1900 an ounce before the conclusion of 2021.

So now the $64,000 question becomes how high could gold trade to in 2022 if the inflationary rate remains or exceeds 6.2%? Using both Elliott wave theory coupled with Fibonacci extensions seen in chart 2 we have drawn the following conclusions. 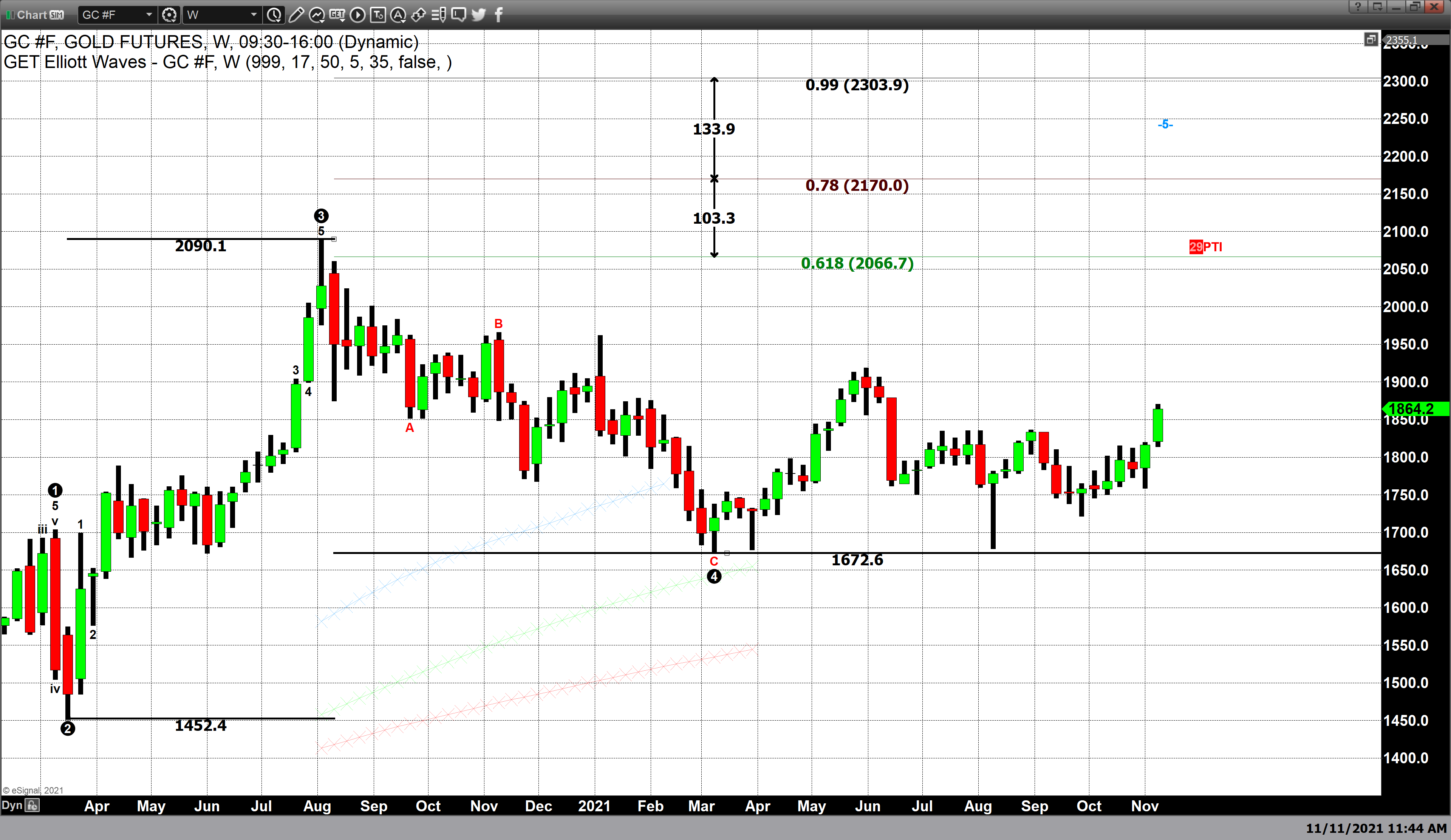 At the low end, we believe that gold prices will trade just shy of the record high achieved in August 2020 when gold hit a high of $2088 per ounce. However, this study indicates that we could see gold prices go as high as $2170, with our high-end projection at $2300 per ounce.

The caveat to this study is if inflationary pressures truly come back into alignment with the Federal Reserve’s target of 2%. This target is based on the PCE core index, for the month of September it was at 4.4%. Because the U.S. Core PCE omits rises in food and energy costs, it is a common belief amongst analysts that that is an unrealistic indicator to use during this inflationary climate. Energy and food costs were the largest contributor to the CPI’s recent inflation rate coming in at 6.2%.

Based upon the CPI inflation index we believe that it is more realistic that recent inflationary pressures will remain at these record-high levels for the better part of 2022, which is why we believe the studies presented in this article are realistic.