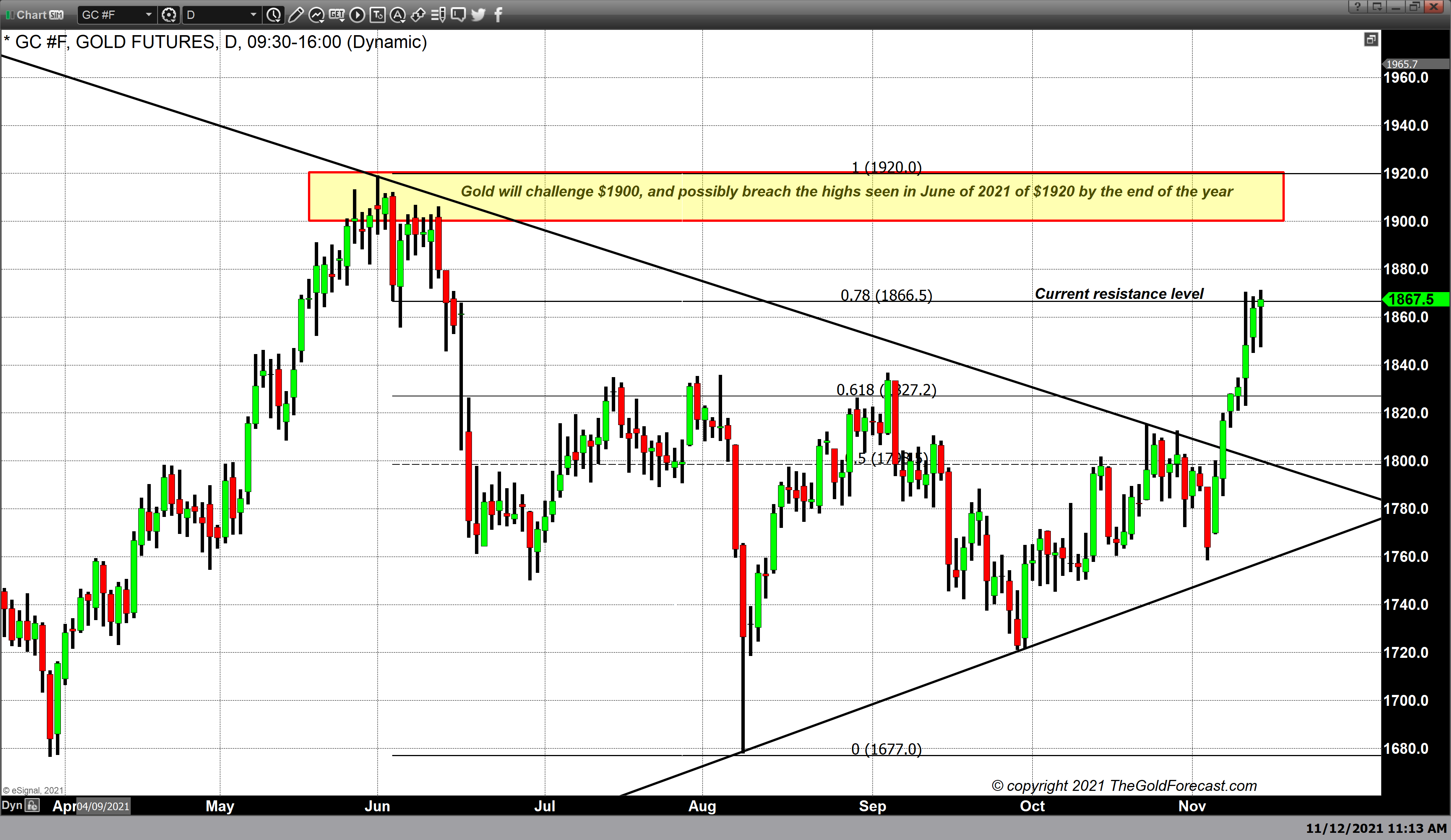 While gold has traded to a higher high, a higher low, and higher close than yesterday, the key is that it has been consolidating right beneath a critical area of resistance. The price point that I’m speaking about is the 78% Fibonacci retracement that occurs at $1867.50. The data set used for this Fibonacci retracement set begins at $1920, the highs that occurred in gold during the first week of June 2021. The data set concludes at the lows created during the flash crash in the second week of August when a robust jobs report for July came in just shy of a million jobs being added taking gold pricing down to an intraday low of $1678.

Unquestionably, the break above $1835 which many analysts including myself identified is a key level of resistance that if taken out could result in a major price advance. The price point of $1835 is based upon the highs achieved during the first week of September 2021, when gold traded to an intraday high of $1837 and closed at $1834.

The current rally which began on November 4 with gold opening at $1770 and after an approximately $23 gain ended the trading session at $1793. This was a delayed reaction with market participants needing time to fully absorb the changes to the Federal Reserve’s monetary policy released on November 3.

This was anticipated, and largely factored into current pricing. However, during the press conference Chairman Powell tempered his statement by stating that although U.S. Central Bank will begin to reduce their asset purchases this month that they were open to adjusting the monthly reductions if called for by market conditions. Secondly, tapering their asset purchases would take until June 2022 before complete at the rate of 15 billion each month. That has profound implications on when the Federal Reserve might initiate lift-off, or interest rate hikes, as it is widely accepted that for the Federal Reserve to raise rates during the period of tapering could dramatically impact any economic recovery and is not an option that is currently on the table. Lastly, during the press conference Chairman Powell stated that even when tapering is complete liquidity will not be hampered due to the enormous size of their balance sheet which currently is more than $8.6 trillion. The chairman made it emphatically clear that their assets without additional purchases would provide vast amounts of liquidity, cheap money to allow continued economic growth.

Possibly one of the most important facets of the chairman’s press conference is he omitted any concrete timeline as to when the Federal Reserve would begin to raise rates. In essence, he said were not even talking about, talking about raising rates right now. He stated that the criteria and data needed to support rate hikes were derived from a different set of criteria and data than the onset of tapering. This left market participants wanting a more complete picture of the Federal Reserve’s sentiment regarding when it would be appropriate to raise rates.

Concurrently on Thursday, November 4, we saw a collective unified front amongst major global central banks aligning with the Federal Reserve, including the European Central Bank, and the Bank of England. Indicating that all three central banks did not believe it was appropriate to begin to raise rates. The net result was another double-digit rise in gold which opened at $1792 and closed at $1816.

The final event that continued the rally in gold occurred on Wednesday, November 10 when a government report indicated that the CPI inflationary index had increased well above expectations, and most alarmingly came in at 6.2%, the highest level since November 1990. It was that event that moved gold on a closing basis above $1835 the former key and critical level of resistance. On November 10 after the announcement of runaway inflation gold traded to a high above $1867.50, and closed well below that level which has become the new key level that is currently providing technical resistance.

As of 4:55 PM EST gold futures basis, the most active December 2021 contract is currently fixed at $1867.70 a net gain of $3.80, and is just fractionally above the critical resistance level by only $0.20. With a couple of hours left in the trading session for the week will be interesting to see if gold closes at, below, or above that key price point. After such a dramatic price advance in the last seven days, I believe that if gold can consolidate at this new price level, even trading sideways rather than profit-taking resulting in a correction it is extremely bullish and represents the distinct possibility that gold will at least challenge $1900 per ounce by the end of 2021.

Yesterday’s article updated my projections for the end of the year and the first quarter of 2022. My prediction had stated that gold would break above $1835 by the end of the year. That has already occurred at a much accelerated pace than I had anticipated because the projections were created before the release of the CPI inflationary index on Wednesday. I also updated my forecast for the first quarter of 2022, stating that I believe is quite plausible that gold will challenge not only $1900 but the high gold achieved in June 2021, at $1920. 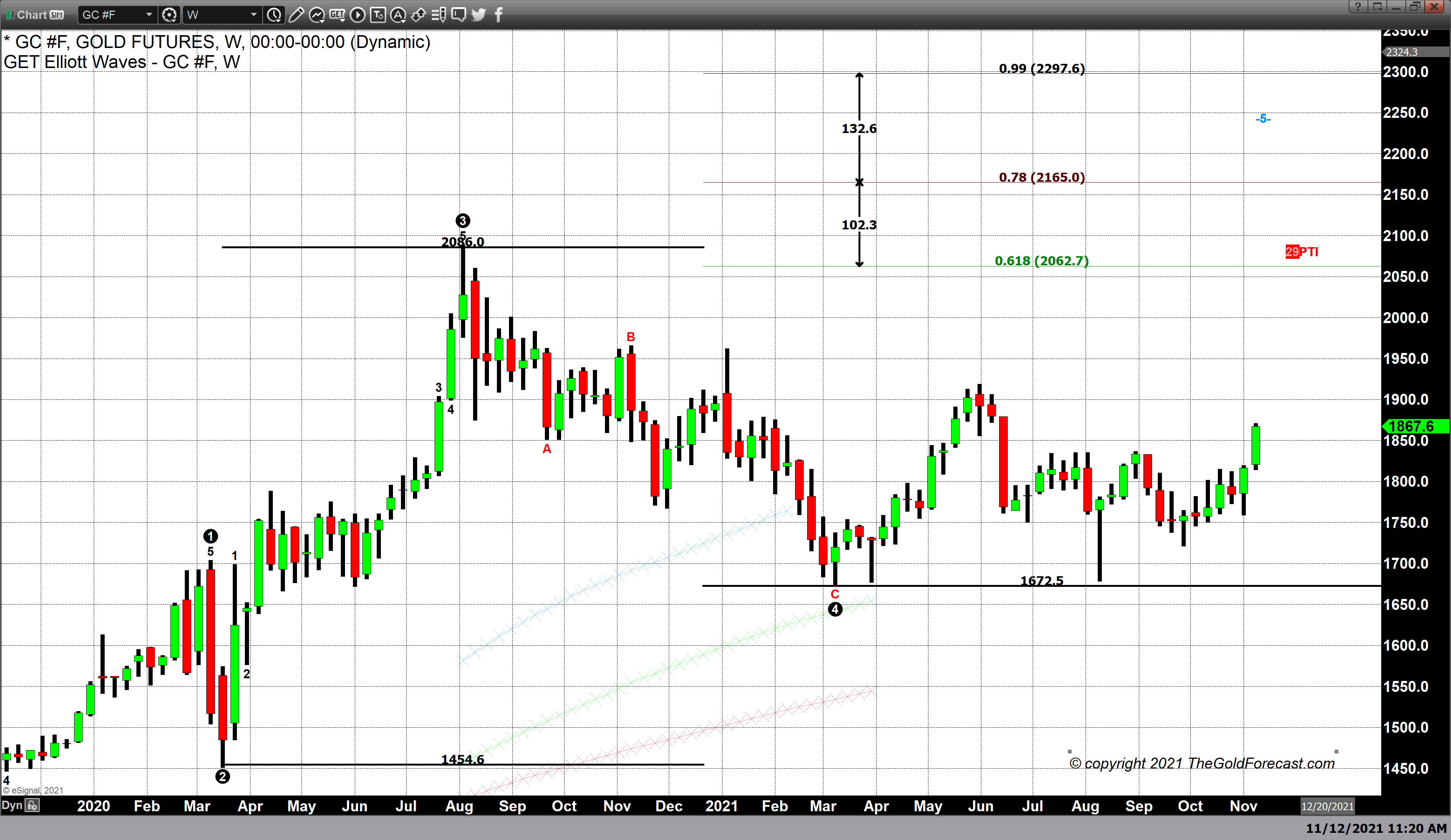 Lastly, I put out my first forecast for the calendar year 2022. The chart contained in yesterday and today’s article layout the price points that I think are achievable next year. My forecast is based upon the analysis of the fundamental events that are currently at play, most importantly a spiraling inflation rate that I believe is much more persistent than the Federal Reserve is acknowledging and will last well into the second or third quarter of 2022. This forecast also utilizes a technical approach to derive its price points utilizing a combination of Fibonacci and Elliott wave theory. Based on the studies I am forecasting that at the low-end gold will reach $2066, my middle projection is for gold to reach $2170, and my highest-level forecast is for an ounce of gold to exceed $2300 which would result in an all-time new record high.