Like gold, silver functions as a safe haven in times of economic uncertainty. And its lower price, currently 1/75th the cost of gold, makes it the "poor man's alternative" flight to safety.

This explains silver's excellent performance last year, as investors piled into precious metals due to the panic in the financial markets caused by the coronavirus. 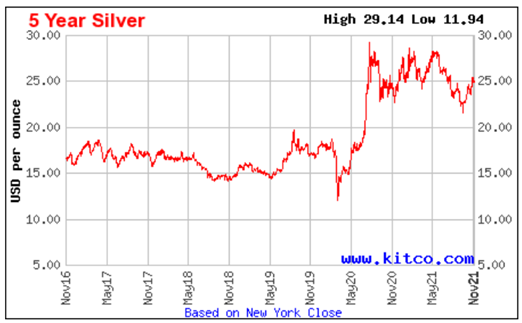 The Silver Institute believes the impetus for investors wanting to stockpile silver will continue, predicting that global silver demand will rise to 1.029 billion ounces this year, up 15% from 2020 and exceeding a billion ounces for the first time since 2015.

In a report released on Wednesday, SI says every area of silver demand is forecast to rise in 2021, including a record amount of industrial demand despite ongoing supply issues.

"The recovery in silver industrial demand from the pandemic will see this segment achieve a new high of 524 million ounces (Moz). In terms of some of the key segments, we estimate that photovoltaic demand will rise by 13% to over 110Moz, a new high and highlighting silver's key role in the green economy," states a press release that accompanied the Silver Institute's Interim Silver Market Review webcast.

Demand for silver used in brazing and solder is expected to improve by 10%, aided by a recovery in housing and construction. 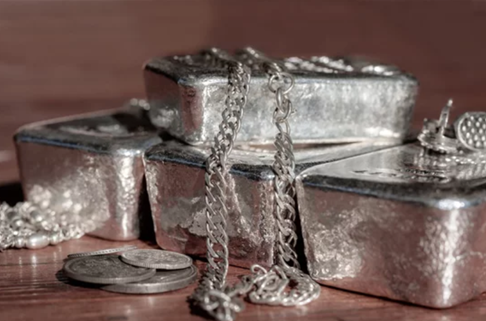 Silver bars and coins will continue to hold investors' interest, with the Silver Institute predicting that physical investment in 2021 will increase by 32% to 64Moz, pushing the year on year total to a six-year high of 263Moz. US bar and coin demand is expected to surpass 100Moz for the first time since 2015, while in India, physical investment in silver is expected to recover from last year's collapse, and surge three-fold.

The supply picture for silver is especially interesting.

According to SI, "In 2021 mined silver production is expected to rise by 6% year-on-year to 829 Moz. This recovery is largely the result of most mines being able to operate at full production rates throughout the year following enforced stoppages in 2020 due to the pandemic.

"Overall, the silver market is expected to record a physical deficit in 2021, albeit modestly. At 7Moz, this will mark the first deficit since 2015."

A number of analyst firms predicted silver would gain this year, including Capital Economics, which targeted a range of $25 to $27 per ounce by the end of 2021, based on a "a market deficit in conjunction with a higher gold price," read the report published on Sept. 30.

In fact silver prices have risen 28% year on year to Nov. 10, around the same percentage rise in 2020. "The upside reflects healthy investor inflows into silver, on the back of supportive macroeconomic conditions, notably the persistence of exceptionally low interest rates, concerns about uncontrolled fiscal expansion and, most recently, growing concerns about rising inflationary pressures," states the Silver Institute.

Silver's hundreds of industrial applications make it very responsive to the condition of the global economy. As the US economy has emerged strongly from the funk of 2020, the increased demand for manufactured goods including solar power cells and electronics has been a boon for silver.

More and more silver is being demanded for use in solar photovoltaic (PV) cells, as countries move towards adopting renewable energy sources. Around 20 grams of silver are required to build a solar panel. The Silver Institute (SI) predicts 100 gigawattas of new solar facilities will be constructed per year between 2018 and 2022, which would more than double the world's 2017 capacity of 398GW.

SI expects silver demanded by 5G to more than double, from its current ~7.5 million ounces, to around 16Moz by 2025 and as much as 23Moz by 2030, which would represent a 206% increase from current levels.

A third major industrial demand driver is the automotive industry.

Another 2021 Silver Institute report says battery electric vehicles contain up to twice as much silver as ICE-powered vehicles, with autonomous vehicles requiring even more due to their complexity.

According to SI's earlier projections, silver's automotive uses will rebound strongly in 2021, to just over 60Moz.

It estimates the sector's demand for silver will rise to 88Moz in five years as the transition from traditional cars and trucks to EVs accelerates. Others estimate that by 2040, electric vehicles could demand nearly half of annual silver supply.

Finally, silver demand for "printed and flexible electronics" is forecast to increase 54% over the next nine years, rising from 48Moz in 2021 to 74Moz in 2030, meaning a consumption of 615Moz during this time frame.

Silver is vulnerable to supply disruptions, more so than gold, because there are relatively few pure-play silver mines. 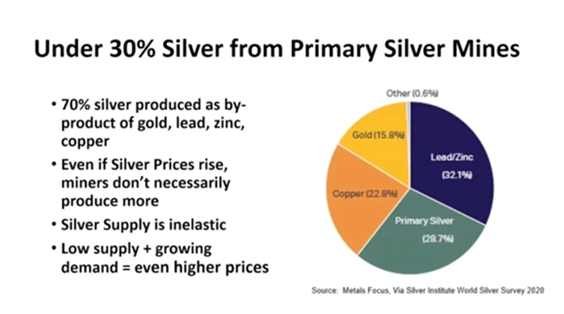 Only around 30% of annual supply comes from primary silver mines. Over two-thirds is sourced from polymetallic ore deposits, including lead/zinc operations and copper mines.

Analyzing the Silver Institute's demand and supply figures in the table below, we see silver mine production started climbing in 2011, from 763 million ounces to 900Moz in 2016. It then fell for three consecutive years, influenced no doubt by lower silver prices which based around $16-17 an ounce during that period, culminating in an eight-year mine production low of 780Moz during the 2020 pandemic year when several silver mines were forced to close temporarily. 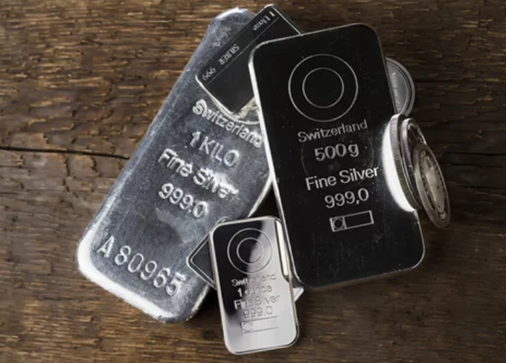 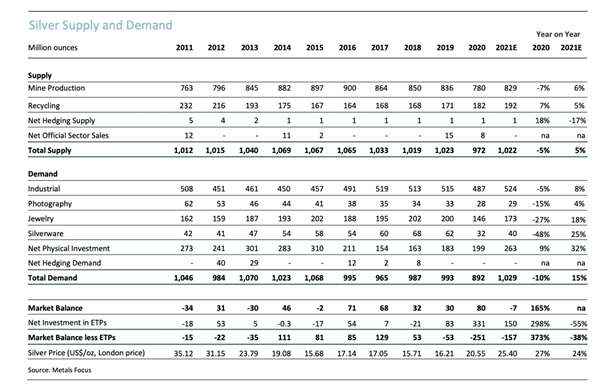 Although mine production has come back with covid restrictions lifted, note that at 829Moz and only six weeks to go before the end of 2021, it is still lower than the 2019 pre-pandemic 836Moz.

Plotted over the past 10 years, as shown in the table, we see silver industrial demand of 508Moz in 2011 on a bumpy ride, falling to 450Moz in 2014, rising to 519Moz in 2017, then diminishing slightly the next two years before diving at the end of the pandemic year to 487Moz. So far this year, industrial demand has surpassed last year's total, @ 524Moz, and increased 8% compared to the same period in 2020, whereas mine supply in 2021 has only increased 6%.

While total supply of 972Moz in 2020 out-paced demand of 892Moz, leaving a surplus of 80Moz, this year looks quite different. Silver supply including mine production and recycling, up to Nov. 10, amounted to 1.022Boz, compared to 1.029Boz of demand, resulting in a deficit of 7Moz.

For end users hoping the silver market will fall back into equilibrium, and maybe even result in a surplus, as silver mining companies return to pre-covid production levels, the problem is that silver demand is not going away, in fact it is only likely to strengthen, given the lustrous metal's use in solder, solar panels, 5G, EVs, and printed and flexible electronics — not to mention steady investment demand in the form of physical silver (bars & coins) and silver-backed ETFs.

Robust silver demand is forming a price floor, and I don't see this changing anytime soon.

Remember too, less than 30% of silver production comes from primary silver mines, with over half sourced from lead-zinc operations, and copper mines, meaning that silver's fortunes are tied to other industrial metals.

Putting everything together, in my opinion, there is really only one conclusion: now is a great time to invest in silver.

The resurgence of industrial demand, coupled with continued investor interest in physical silver and silver ETFs, are two of the main factors likely to power the metal higher.

Upward price movement is also likely to result from an inflation scenario which as we have shown in previous articles, has seeped into the economy and is proving to be less transitory and more permanent than central bankers and other government officials would like to admit.

And this just in: With Americans thinking about tucking into turkeys next week, it's worth considering how much a Thanksgiving dinner with all the fixing costs, in dollars, versus silver and gold. Jeff Clark, senior analyst with GoldSilver.com, crunched the numbers, and found that over the past 20 years, the average cost of a Thanksgiving meal has risen 40%. But if those same dinners were paid for with gold, the cost of turkey day has fallen by 78%! If priced in silver, the cost savings are even more dramatic. According to Clark's calculations,

In other words, 74.6% less silver is needed to fund the exact same meal today than 20 years ago, even though the price of that meal has risen. 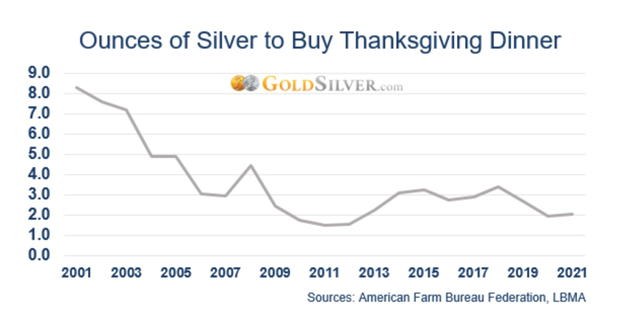 A higher silver price is great news not only for investors but for junior silver explorers which historically offer the greatest leverage to a rising commodity price.