With gold and the buck, as told, you're in luck

As time is at a bit of a premium for penning this week's missive, (even as Gold is priced at a massive discount by valuation), let's jump right in.

The macro question at large we oft receive is:

¦ "How come Gold isn't much higher with all the money printing?"

Macro indeed per the above Gold Scoreboard, price having settled yesterday (Friday) at $1847, just 46% of our valuation level of $3993. To be sure per the right-hand panel Gold is, on balance, in ascent toward chasing the unconscionable rise in the U.S. "M2" money supply; yet the gap from here to up there remains HUGE!

The micro question of late we oft receive is:

¦ "How come Gold is going up even if the Dollar is also going up?"

Micro indeed as such phenomenon does on occasion occur given (for the ad nauseath time) Gold plays no currency favourites. To be sure, both Gold and the Buck have been on the rise per their percentage tracks for the 15 trading days thus far in November. Here as shown, Gold is +3.5% and the Dollar Index is +2.1%. Yes, Gomer, it really can happen: 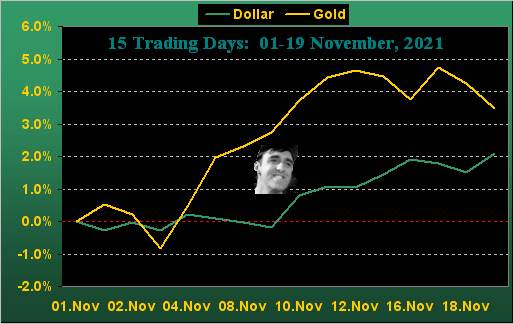 In fact "surprise, surprise, surprise" if measuring from mid-year 2014, (albeit their respective routes hardly are in linear harmony), Gold is +39.7% and yet the Dollar Index is +20.4%. So even more broadly there, no directional favoritism. And yet from that date some seven years ago, the supply of Gold is only +10.7% whereas the U.S. "M2" money supply is +88.4%. Further with specific respect (or lack thereof) to the Dollar, recall from Econ 101 class that more of something (in this case much more) makes it worth less, arguably in the Dollar's case worthless.

And yet an inevitable -- some say forcibly imminent -- Federal Reserve interest rate increase (versus, for example, sovereign bank rates in Europe still seen as staying essentially negative for the foreseeable future), is therefore getting the Dollar a bid such as to push the Buck into the lead of the currencies' so-called Ugly Dog Contest.

'Course, attempting to explain irrationality is an exercise in same, in this case more Dollars nonetheless being worth more whatevers. And even irrespective of inflation, we read speculation this past week of the €uro ultimately collapsing ... and being replaced by the Dollar. "What?" But then, could such dual-continent currency still be deemed a "Federal Reserve Note"? Either way, we wouldn't recommend your losing sleep over this whimsy. For if you've Gold, you're fine.

And looking .9999 fine is our chart of Gold's weekly bars with their parabolic long trend, now neatly in place these past three weeks. Yes, Gold put in an acceptable net loss for this recent week after having been up for five of the prior seven. However, the daily table therein of our BEGOS Markets "Breakout?" suggestions popped up last evening with "Sell" for both precious metals. So some further slipping may be seen into the ensuing week; yet on balance by the bars' structure in the chart, the 1800s not only appear safe, but the dashed regression trend line is now more perceptively rotating from negative toward positive. And that would tie in well (as historically noted last week) with Gold reaching 1971 during this new parabolic Long run:

Thus having awakened the dip buyers, let's turn to the StateSide economy, by which our Economic Barometer had a sound week and sufficiently so as to put it on pace toward recording its second best month year-to-date. For the week's 14 incoming metrics, 12 were improvements over the prior period, the only two negatives being inflationary October Import Prices (even ex-Oil) and a slight slowing in that month's Housing Starts. But the latter was mitigated by growth in Building Permits, plus a firm increase in November's National Association of Home Builders Index. November also scored marked increases for both the New York State Empire and Philly Fed Indexes. Other positives included October's Retail Sales, Industrial Production, Capacity Utilization, and the Conference Board's lagging read of Leading Indicators. "'Tis all good, right?" Well, just bear in mind there, Bunky, that much of Q3's Gross Domestic Product "growth" was mitigated by a very high Chain Deflator, (i.e. inflationary rather than real growth):

And as to Q3 Earnings Season, it just ended as follows: for the S&P 500, 80% of reporting constituents beat both estimates and prior period results. 'Tis rare when the latter keeps up with the former. However more broadly, 1,440 other mid-cap and smaller companies by our tabulation found just 56% having actually improved over 2020's Q3 shutdown period. That's an uh-oh...

But in toto, great economics (arguably inflationarily but not really) + great earnings (by estimates but not always actual growth) = S&P 500 all-time highs. Moreover, money is pouring into the stock market per the website's S&P Moneyflow page: "Let's all buy high!" 'Tis quite extraordinary.

Squire, we long ago stopped counting the number of would-be S&P blow-off tops. Remember: as we've herein put forth for many-a-year, this is now the age of the stock market being the Great American Savings Account. "You have to be IN!" they say. "Gold's for the BIN!" they say. And then there's the ever-annoying individual blurter: "I bought X back at blah and am now making BLAH!" For whom we have this important reminder: the market capitalization of the S&P 500 as of Friday night is $41.4 trillion; yet the liquid M2 money supply of the U.S. is but half that at $21.4 trillion. So when it all goes wrong, good luck in getting out with something.

Meanwhile amongst it all going good, we read that a record number of StateSide workers are quitting their jobs, the notion being they can do better doing something else. Watch for this great mania of "There's a better way!" and "My stocks are so up!" ultimately ending with "What was I thinking?"

Then from the "We Knew This Was Coming Dept." it seems just mere weeks go by before yet again U.S. Treasury Secretary Janet "Old Yeller" Yellen has to chase down the Legislature 'cause she's run out of dough to make the country go. For sanity's sakes: "Got Gold?" Hopefully as the Fed Chair passes to Lael "The Brain" Brainard, she and the Treasury Secretary can sort it all out. (See too: "In Like Flint", 20th Century Fox, '67).

From steely flint to a wee loss of glint describes at present our precious metals. Per the two-panel graphic below, we see on the left a bit of a topping pattern in the daily bars, but again with structural support still well within the 1800s. Then on the right in Gold's 10-day Market Profile, 1864 clearly is the dominant price traded across these past two weeks:

Silver, too, shows similar toppiness per her daily bars (at left) with the low 24s/high 23s as supportive; then in her Profile (at right), 25.15 is where the bulk of Sister Silver's action has been:

In sum, we see a bit of near-term pullback for Gold and Silver, but nothing really materially daunting, especially given the notion of 1971 during Gold's current parabolic up run; (you'll recall from a week ago, arriving at that level equates to the median gain of the 43 prior parabolic Long trends since the year 2001). And at some point -- you know, and we know, and everyone from Bangor, Maine to Honolulu and right 'round the word knows that -- the Buck ultimately shall run out of luck.

Indeed to that end (and so much more), in having opened with a couple of questions, let's close with one that came in this past week from a highly-valued publisher of The Gold Update: "Do you think $1900 is nigh?" Our response in kind: "$4000 is nigh."