Today the Bureau of Economic Analysis, a division of the US Department of Commerce reported that the cost-of-living has risen at the fastest pace in just under 31 years vis-à-vis the PCE (Personal Consumption Expenditures Price Index). The costs of goods and services increased by 0.6% in October. That takes the PCE index to 5% year over year. This is the greatest increase in inflation since December 1990. This also confirms a government report earlier this month indicating that the CPI (Consumer Price Index) rose to 6.2% in October, the largest rise since November 1990.

Record high levels of inflation and the fact that the Federal Reserve is now predicting (admitting) that inflation will be more persistent than originally perceived. The Federal Reserve’s current projections indicate that these pressures will last well into the middle of next year. However, many analysts believe that this is another underestimated by the Fed who believe that inflationary pressures will not subside till the third or fourth quarter of next year.

Many members of the Federal Reserve have indicated that they are open to accelerating the tapering process which began earlier this month so that they can raise rates quicker than projected and anticipated.

According to Reuters, "A growing number of Federal Reserve policymakers indicated they would be open to speeding up the elimination of their bond-buying program if high inflation held and move more quickly to raise interest rates, minutes of the U.S. central bank's last policy meeting showed."

The minutes of the last FOMC meeting revealed that "Various participants noted that the (policy-setting) committee should be prepared to adjust the pace of asset purchases and raise the target range for the federal funds rate sooner than participants currently anticipated if inflation continued to run higher than levels consistent with the Committee's objectives." 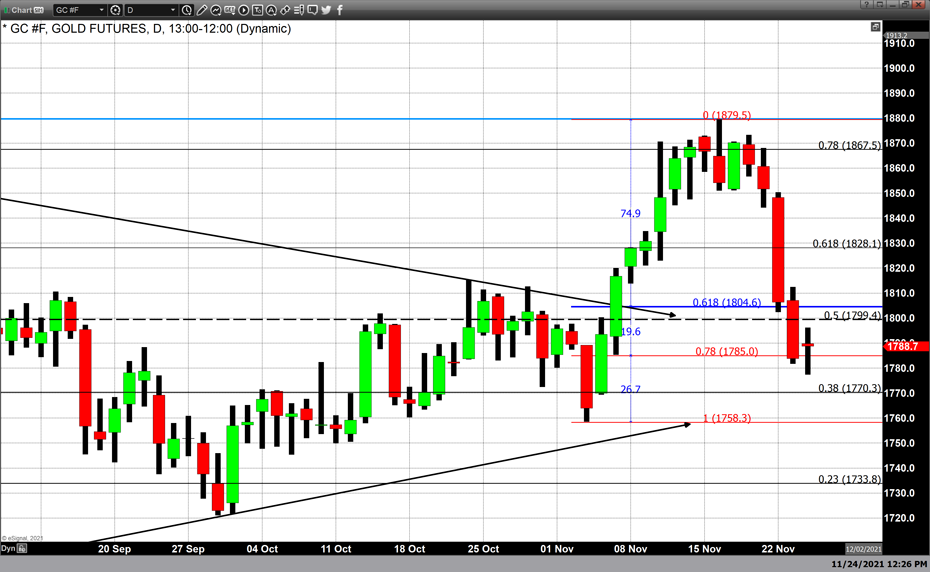 The revised sentiment of Federal Reserve members has changed the timeline to lift-off, or interest rate normalization to June of next year, or as early as April. To achieve this, they must accelerate the tapering timeline which is now very likely. The Federal Reserve will convene for the last FOMC meeting of 2021 on December 14–15.

The net result has been extreme dollar strength and strong upticks in yields of U.S. 10-year Treasury notes and other U.S. debt instruments.

This has changed the focus of gold investors and traders who bid the precious metal higher at the beginning of November based upon concerns over rising inflation, to concerns about interest rate hikes beginning much sooner than anticipated. This change in focus has taken gold futures from an intraday high of $1879 on November 16, to today’s low of $1777 today.

Market sentiment has shifted in gold from bullish the bearish as a direct result of the double edge sword of inflationary pressures. For the most part, it seems that market participants are factoring in a much more aggressive monetary policy by the Federal Reserve.

On a personal note, with the holiday season beginning, and the Thanksgiving holiday occurring tomorrow in the United States, I want to wish our members, and readers of our daily Kitco News "After Hours" commentary health and happiness and the return to some sense of normalcy after this prolonged pandemic and recession.