Day that changed the world?

S&P 500 and pretty much everything apart from Treasuries and safe haven plays down precipitously, with panic hitting oil the hardest. The post Thanksgiving session turned out not so light volume one, but the fear wasn't sending every risk-on asset cratering by a comparable amount. What we have seen, is an overreaction to uncertainty (again, we're hearing contagion and fatality rate speculations – this time coupled with question mark over vaccine efficiency for this alleged variant), and the real question is the real world effect of this announcement, also as seen in the authorities' reactions.

Lockdowns or semi-equivalent curbs to economic activity are clearly feared, and the focus remains on the demand side for now, but supply would inevitably suffer as well. Do you believe the Fed would sit idly as the economic data deteriorate? Only if they don't extend a helping hand, we are looking at a sharp selloff. Given the political realities, that's unlikely to happen – the inflation fighting effect of this fear-based contraction would be balanced out before it gets into a self-reinforcing loop. With the fresh stimulus checks lining up the pocket books, Child and Dependent Care Tax Credit etc., we're almost imperceptibly moving closer to some form of universal basic income. Again, unless the governments go the hard lockdown route over scary medical prognostications (doesn't seem to be the case now), such initiatives would cushion financial markets' selloffs.

Looking at Friday's price action, PMs retreat shows that all won't be immediately well in commodities, where oil looks the most vulnerable to fresh bad news in the short run (while stocks would remain volatile, they would find footing earliest). Demand destruction fears are though overblown, but the dust looks to need more time to settle than it appeared on Friday above $72-$73:

(…) New corona variant fears hit the airwaves, and markets are selling off hard. We can look forward for a light volume and volatile session today – S&P 500 downswing will likely be cushioned by the tech, but high beta plays will be very subdued. Commodities are suffering, and especially oil is spooked by looming (how far down the road and in what form, that’s anyone’s guess) economic activity curbs / reopening hits. Precious metals are acting as safe havens today (mainly gold) while the dollar is retreating – and so will yields, at least for the moment. Time for readjustment as the wide stop-loss in oil was hit overnight – it’s my view that the anticipated demand destruction taken against the supply outlook, is overrated.

When the (rational / irrational) fears start getting ignored by the markets, we're on good track. 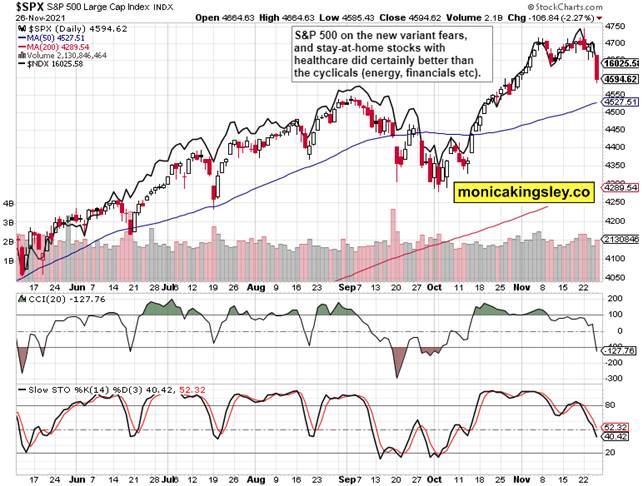 S&P 500 is still far out of the woods, and a good sign of better days approaching would be tech and healthcare sound performance joined by financials and energy clearly on the mend. Earliest though, HYG should turn.

It's too early to call a budding reversal in credit markets – HYG needs to not merely retrace half of its daily trading decline. Money coming out of hiding in Treasuries, would be a precondition of prior trends returning. They will – they had been merely punctured.

Precious metals gave up opening gains, and with the hit to inflation expectations, lost the developing tailwind. It would though come back in an instant once calm minds prevail or fresh stimulus gets sniffed out. 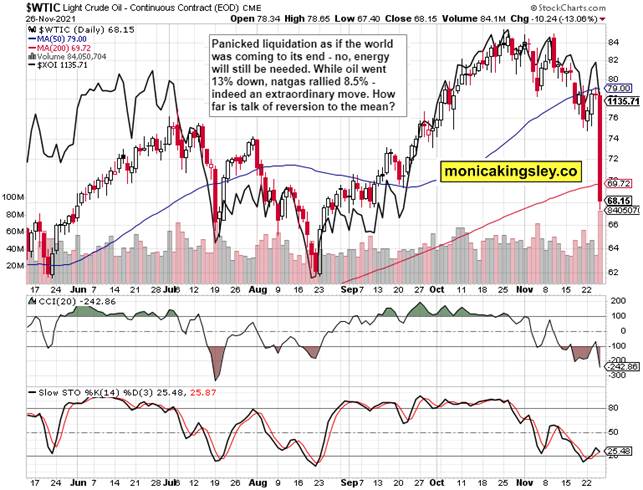 Crude oil had a catastrophic day – how far are we along capitulation, remains to be seen. The oil sector didn't decline by nearly as much, highlighting the overdone and panicky liquidation in black gold. 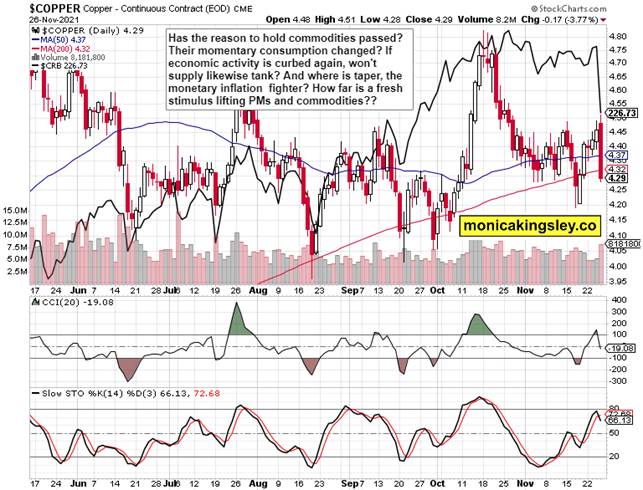 Copper decline didn't happen on nearly as high volume as in oil, making the red metal the likelier candidate for a rebound as the sky isn't falling. 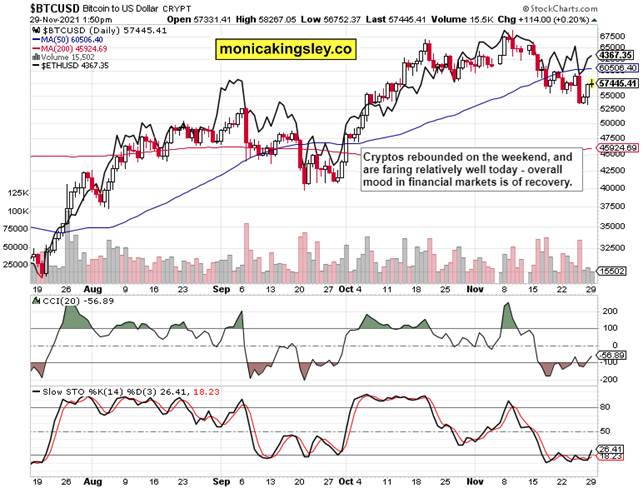 Bitcoin and Ethereum marching up on the weekend, were a positive omen for the above mentioned asset classes. In spite of cryptos still being subdued, the overall mood is one of catious optimism and risk very slowly returning.

Friday's rout isn't a one-off event probably, and S&P 500 would turn higher probably earlier than quite a few commodities. Cynically said, the variant fears let inflation to cool off temporarily, even as CPI clearly hasn't topped yet. As demand destruction was all the rage on Friday, supply curbs would get into focus next, helping the CRB Index higher – and that's the worst case scenario. Precious metals certainly don't look to be on the brink of a massive liquidation – the current selloff can't be compared to spring 2020. For now, the price recovery across the board remains the question of policy, of policy errors.