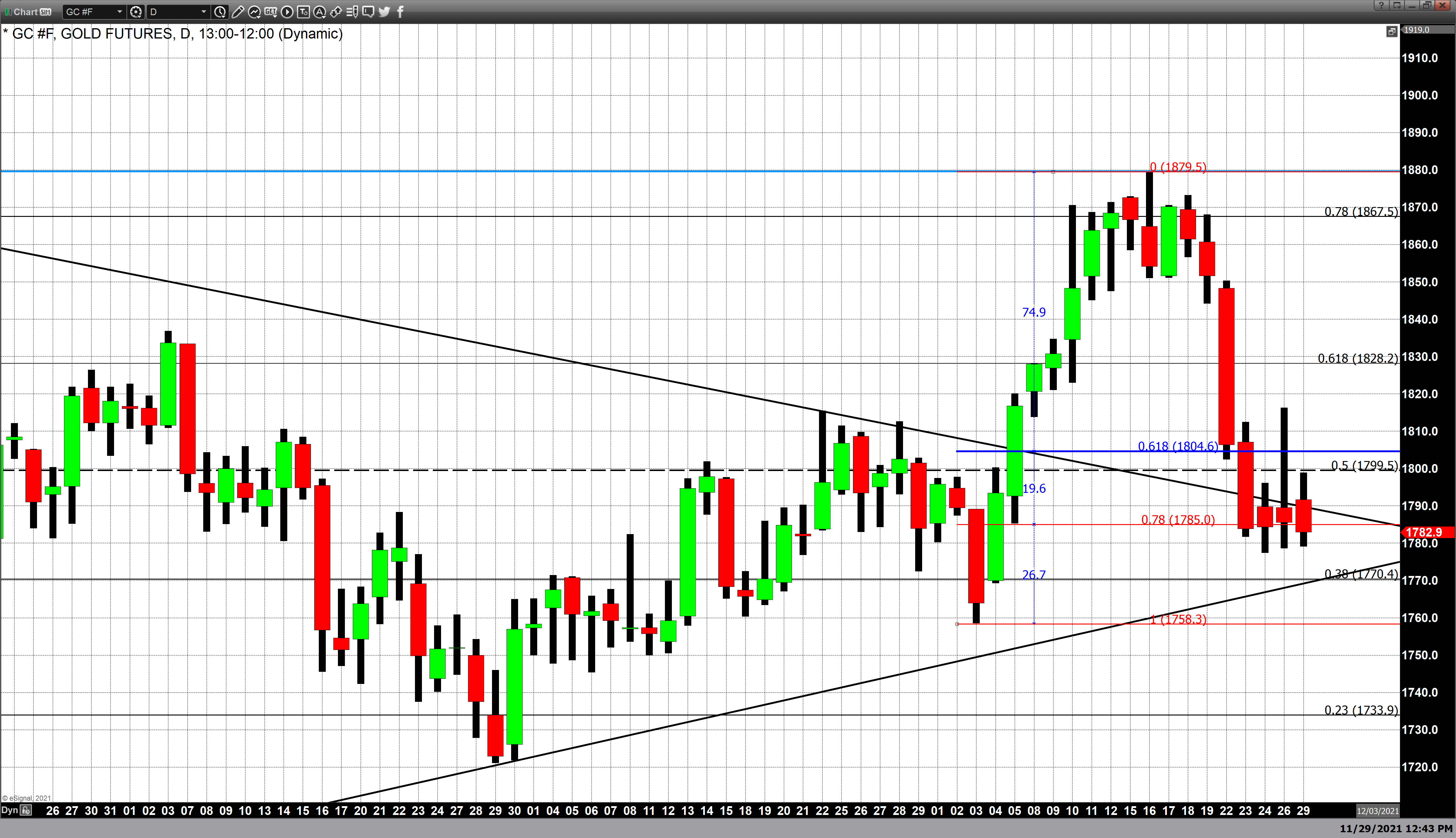 The strong recovery in U.S. equities coupled with marginal dollar strength pressured gold to a low of lower $1779.10 before recovering. As of 5:20 PM EST gold futures basis, the most active December 2021 contract is $2.60 lower (-0.15%) and is fixed at $1782.90. Unquestionably, today’s fractional decline in gold was a product of a return to the bullish risk-on sentiment, which quickly recovered from Friday’s dramatic decline. Friday’s sell-off was based upon the concern for a new Covid-19 variant called Omicron.

Last Friday’s trading session was minimized, with all major markets closing early for Thanksgiving’s extended holiday weekend in the United States. However, even with a shorter trading session, market participants had time to react to the news of a new Covid-19 variant that was detected in South Africa. The variant triggered a worldwide sell-off in global equities on Friday, as countries such as the United States, Canada, the European Union, and Britain all put in place travel restrictions from many countries close to South Africa. The concern over this new variant is based upon the fact that there are dramatic differences between Covid-19 as well as the other variants.

Lawrence Young, a virologist at Britain’s University of Warwick said, “This new variant of the COVID-19 virus is very worrying. It is the most heavily mutated version of the virus we have seen to date,”

Currently, the major pharmaceutical companies who developed the vaccines for the Covid virus are testing to see their vaccines offer protection against infections of if this new variant, Omicron. Estimates to gauge the effectiveness of the current vaccine to this new variant will take a couple of weeks. Still, the major pharmaceutical companies have stated that they can effectively produce a modified vaccine to combat the omicron variant by January of next year.

Technically speaking it appears as though gold pricing has shown strong signs of consolidating at this lower price point below $1800. Over the last three trading days, gold has traded with a fractionally higher low. However, there is only one instance over the last three trading days in which gold traded to a higher high, which was Friday. Friday’s trading activity was the net result of the knee-jerk reaction to the new Covid-19 variant. Gold futures traded to an intraday high of $1816 before settling lower at approximately $1786 per ounce.