■ Indeed literally at the top: the above Gold Scoreboard displays valuation having crossed above the $4,000/oz. threshold; and yet you can own Gold for a fraction of that at $1,792/oz given yesterday's (Friday's) settle; "Got Gold?"

■ Both wrong -- and moreover shocked -- we were over Biden's handlers writing "Jerome Powell" rather than "Lael Brainard" on the FedHead index card for the President to read aloud this past Monday; a selection 180° anti-correlative with the Administration's endless money 'n climate change modus operandi;

■ The emphasis of last week's piece was for a near-term technical pullback in Gold's price, wherein 'twas stated "...the 1800s ... appear safe..."; rather, this past week's low was 1777, the "Powell" selection being the fundamental impetus justifying that technical condition;

■ Prior to The WHO's (not the band, but the U.N. organization) effort to maintain its raison d'être with Friday's "Oh my! Omicron!" scare, we were prepared to state that "Powell" would push for a FedFunds rate hike in the 26 January Policy Statement; but if this instead is "The Beginning of the End, Part Deux", shall they ever raise again?

■ And "Oh my! Omicron!" in turn is credited as the catalytical scapegoat for the S&P 500's -2.3% loss on Friday, (recall the single-day COVID losses in 2020 were several times that amount); yet still not a FinMedia peep about the S&P's earnings levels simply not being supportive of the Index: our "live" P/E = 49.3x; its lifetime median = 20.4x; (ready for the next means reversion?)

Now: but for two trading day's remaining in November's balance, let's go with the following usual month-end graphic, albeit both Monday and Tuesday can well blow us far from Kansas, Toto. Thus with that in mind and seat belts fastened, here are the BEGOS Markets Standings year-to-date. The economically-driven markets dominate the top three podium spots whilst the safe havens remain the also-rans. "Everything's great!" right?

Specific to Gold, as above shown -5.7% to this point in 2021, here below we've the weekly bars and parabolic trends, the ongoing blue-dotted Long stance now four weeks in duration. As measured from a year ago, this past week was Gold's third worst performance on both a points and percentage loss basis. A bit of a heartbreaker, that. Even as "Oh my! Omicron!" is wild-card bullish for Gold; yet "Powell" is the more hawkish-to-be FedHead selection (bearish, but not really) for Gold: 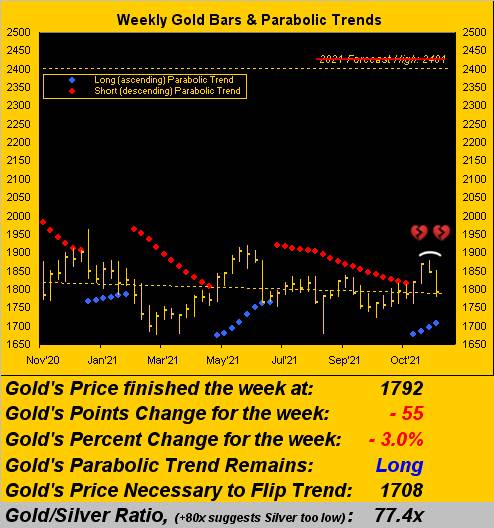 "You're saying that because rising rates have actually found Gold to rise too, right, mmb?"

Either way, Gold's year-over-year percentage track has been, on balance, sideways. Which in turn really emphasizes the "Live by the miners, Die by the miners" nature of precious metals-based equities as is starkly made obvious here:

As for our Economic Barometer, the past week's slate of incoming metrics found but one which was negative: October's Durable Orders (itself a volatile series). The balance of the bunch had improvements including Home Sales (both New and Existing), plus Personal Income and Spending. But the "turn a blind eye to it" Q3 Chain Deflator was revised upward: that's the party pooper, further highlighted by the Fed's favourite gauge of inflation -- Core Personal Consumption Expenditures -- doubling its October growth over that for September. "Hey Jay! Raise 'em 26 January anyway?" Here's the Baro along with the wee pullback in the S&P:

Next as we go 'round the horn with the BEGOS Markets, their respective rightmost daily bars are indicative of Friday's "Oh my! Omicron!" effect. And note from the safe haven standpoint the net comparable under-performance of the precious metals vis-à-vis the leaps by the Bond, Euro and Swiss Franc. As well, the three year-to-late leaders in the aforeshown BEGOS Markets Standings turned tail toward butt ugly, namely Oil, Copper and the S&P 500. And with all those baby-blue dots of trend consistency on the skids, a Santa Claus rally doesn't at present appear in the bids: 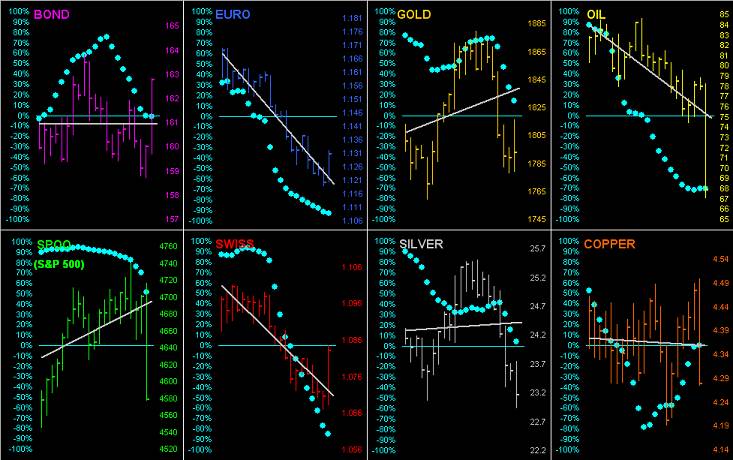 As for the 10-day Market Profiles for the precious metals, be it for Gold on the left or Silver on the right, from each one's height, they now hardly look right. Indeed, the pick of "Powell" thus far trumps any Gold-positive fear of "Oh my! Omicron!":

And thus Gold for November has gone from stud to dud, the rightmost monthly bar below barely green by a nub. Gold's trying to re-secure The Northern Front remains a Battle Royale: 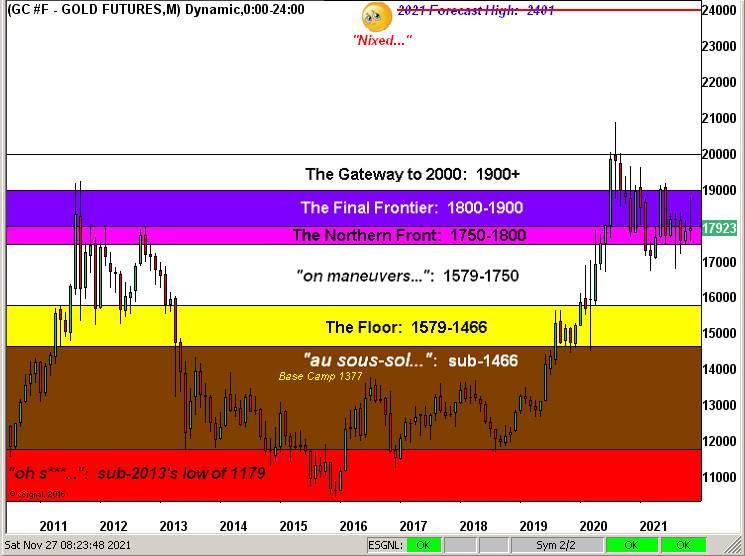 So there it all is. Gold was on a November roll -- up some 95 points (+5.3%) -- just over a week ago, albeit with momentum already perceptively slowing, our last missive showing. Then Monday came Biden's shocking bonking of "Brainard" toward maintaining "Powell" as FedHead, and from the month's high of 1880, Gold post-bonk was swiftly down over 100 points. Even as a safe-haven following Friday's WHO surprise "Oh my! Omicron!" cry, Gold bounced a bit, but failed to hold grip, the question now being: "Does Gold further slip?" Regardless, we answer: "Just buy Gold's dip!" 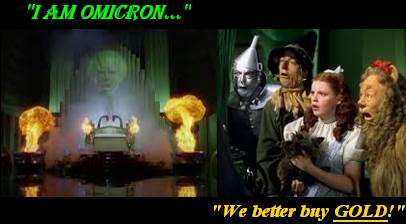