Silver will show the way

For the first time in many years, the precious metal universe has outpaced the S&P 500 and Dow. This has been the case since October began. And as we thought would happen, silver has been stronger than gold (SLV up 17.5% vs GLD up only 8.1%). Also, GDXJ (up 28%) has been stronger than GDX (up 20%), though of course all the miners have been strong. For the first time in a while, none of our miners is trading below book value. However, having been beaten down so much, and having lagged the averages for so many years, the miners' rise still has much farther to go.

The important thing to remember is that these sectors have been rising from bombed-out lows. Silver is still far below its record highs, and indeed, is still far below the $30 level it must better in order to have a clear run at those old highs. It is sobering to realize that the last time spot silver was clearly above that $30 level was in late 2012. Since then, it has only gotten as high as $29.14. 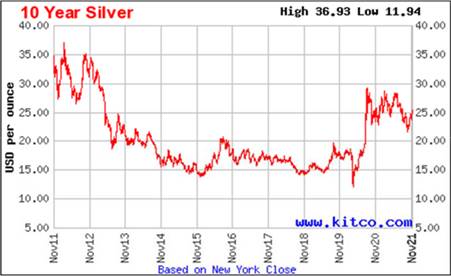 Thus, for this recent move to truly translate itself from just a rally from bombed-out levels to a persuasive new bull leg, silver has to get above $30. 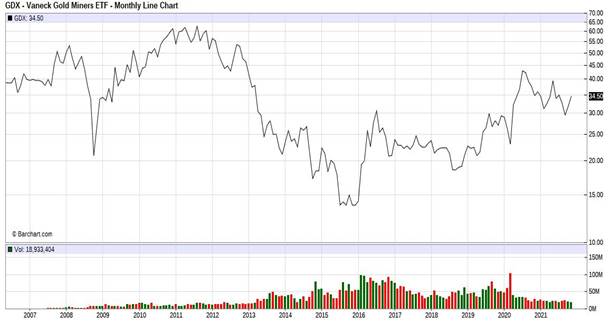 So while I'm naturally happy to see the recent action, I won't be jumping up and down for a while yet. And while I believe that we have entered into a new, strong bull move, it is the actual price action which will decide things, and not my own opinions.

For the first time in decades, people are becoming afraid of inflation. The situation is muddied up by conflicting forces. The engine of inflation is money and credit expansion by central banks. In the US, the Fed's balance sheet is now over $8.7 trillion, up 20% from year ago levels, and up much more than that in the last few years. Since interest rates are still well below the inflation rate, those who can are borrowing to buy homes and companies.

However, there is another factor driving up prices, at least in the US. The supply chain problem is responsible for this: the record number of ships sitting idle outside ports, coupled with the severe shortage of truck drivers to carry products.

This has caused the sort of price which, while arduous, does not truly constitute the type of inflation which distorts the entire economy in the way that credit expansion does. This type of expansion, of 20% in the last year, is bad enough.

In fact, Fed expansion of the past several years is so bad that they dare not cut back on it too much, as this would expose the numerous bad investments that extremely low interest rates have caused. It would also cause a stock market crash, since so much of the recent asset appreciation in equities has been a direct result of all this loose credit coupled with low borrowing costs.

In short, we remain in the dire predicament which the late Richard Russell so vividly called "Inflate, Or Die". This is pretty much the choice facing every central bank, and has been for years.

But now that the bad parts of money inflation have begun to make themselves seen, the tasks of central banks will become more difficult. They could get away with massive credit expansion when the price level was stable for all except stock and bond prices (which everyone liked).
But now? Their alternatives are much stickier.

It is only a matter of time before long term yields rise. However, the US 30 year bond yield is still under 2%, and is a far cry from the 3.4% of three years ago. I've noticed that in the early stages of a massive change in interest rate trend, the first few years are messy. Much money can be lost --and has been-- by people betting on higher yields over the past three years. Rather than jumping in to short bonds now, I want to wait for a clear trend to be in place.

This new burst of inflation --to the extent that it is caused by the non-transitory events of money manufacturing-- has been a long time coming. Remember that Fed Credit stood at around $800 billion in the period before late 2008. Thus, the years since then have seen that important figure explode by a factor of ten. This is over 900%. It was only a matter of time before this seeped into the overall price level.

I view this past decade or so in much the same way as what happened from 1949 to 1966. All the while monetary inflation was going on, the price level (with the temporary exception of the Korean War period) did not rise so much. Only asset prices in the stock market rose, making everyone happy.

However, by the late 1960s prices began to rise for consumers, slowly at first, and then much faster. It is no accident that when this happened for the first time in 1966, the Dow put in its highs at levels which would not be seen again, in real terms, for another two decades. It is entirely possible that we could see a repeat of history in the coming quarters.

I wonder whether this thinking is shared by Warren Buffett: he has been steadily exiting the
stock market: being a net seller for the past four quarters, and building cash to record levels of around $150 billion.
[See more here: https://www.investors.com/news/warren-buffett-plays-stock-market-defense-berkshire-hathaway-earnings-brkb-stock-buybacks/ ]

As a huge and very public player, he can't risk being seen as a dramatic seller. But it seems to me that he is doing what he can to quietly prepare for a halt in the endless record highs of the averages.

I think he sees recent equity action as inflated and unsustainable.

The 'good' inflation that only lifts asset prices is probably coming to an end, and the 'bad inflation' that lifts consumer prices is beginning... much like the period which started in 1966.

Back then it was the precious metals mining stocks which emerged as the out-performers. We may be seeing this trend happening again.

Since the lows of the miners in September, we have indeed seen them out-perform the stock averages. I don't know how much this means, but September marked the 10th anniversary record prices in the precious metals sector, which reached their peaks in real terms since this bull market began in 2001 back in 2011.

The first leg up in this bull market was just over ten years, from early 2001 to late 2011. Since then most of this sector has been severely under-performing. Maybe it took an amount of time equal to the first bull leg to finally signal the start of a second bull leg.

In the meantime, we watch, wait, and hope... and are much more content than we were a mere six weeks ago.

Metals and Miners Rise While The USD Does As Well

For those people who still think that the PM universe cannot rise unless the USD falls against other currencies, may I point out that this current jump has happened precisely at the same time when the USD has strengthened?

Of course, the USD Index also rose from June thru September, when the PM sector was down. This means that, as I've seen so many times, there is no certain correlation between the path of the USD vs other currencies and the path of the metals and miners.

Follow @KitcoNewsNOW
weberglobal.com/
Disclaimer: The views expressed in this article are those of the author and may not reflect those of Kitco Metals Inc. The author has made every effort to ensure accuracy of information provided; however, neither Kitco Metals Inc. nor the author can guarantee such accuracy. This article is strictly for informational purposes only. It is not a solicitation to make any exchange in commodities, securities or other financial instruments. Kitco Metals Inc. and the author of this article do not accept culpability for losses and/ or damages arising from the use of this publication.

Thursday's Charts for Gold, Silver and Platinum and Palladium, July 7