The bias is up but momentum is anemic

The bias is up but momentum is anemic 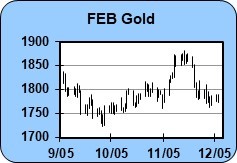 With the February gold contract forging a five-day high in the early going today and approaching the 200-day moving average at $1796.15, the bull camp has a foothold. Prices are tracking higher despite weaker Chinese gold prices overnight. While traders are already looking ahead to the Chinese inflation reports for November on Thursday and the US CPI port on Friday, near term action is likely to be determined by oil prices, equites, and the dollar. Both gold and silver seem lucky to have rallied yesterday, as a bigger than expected decline in US nonfarm productivity and an increase in US unit labor costs could have sparked hawkish Fed fears. However, crude oil rallying more than $3.50 (at times) and one of the larger daily gains in US equities of the year certainly fosters inflationary psychology. What a difference several days can make! Last week the trade was of a mind that the latest coronavirus twist would delay Federal Reserve tightening plans. Now the pendulum has swung, with renewed projections a faster tapering of asset purchases. On the other hand, strong Chinese export and import statistics provides a positive view toward their economy, which could support the metals on new fresh hopes of stronger physical demand. The trade is looking for an increase of 0.7% for the Friday CPI number, and that should spark renewed inflationary expectations. Key points on the upside for February gold are the 200-day moving average at $1,796.25 and then again at $1,800. Critical support today is seen at $1,771 and $1,762. The silver trade should have come away discouraged on Tuesday, as a big picture risk-on day failed to lift prices markedly. On the other hand, the silver market has not seen consistent investment interest, perhaps because the gold market has been a consistent leader. Fortunately for the bull camp, the silver market is at the low end of its four-month trading range and appears to have found value above $22.00.

We are highly skeptical of the palladium market's rally yesterday, as the gains appear to be a simple sympathy rally with other commodity markets were forged on extremely low trading volume. However, favorable Chinese import/export data should be supportive of palladium, as that suggests the economy is growing and Chinese demand for cars could also be set to improve. In a supportive development overnight, an Asian financial company projected palladium prices to "normalize and trade at $2300 in the coming 12 months! Limiting the PGM markets is surprising strength in the dollar despite a broad-based euphoria wave, as that might signal that it has settled into an uptrend. Key support in March palladium today becomes $1,812.60.

While the platinum market also benefited from the broad-based risk-on vibe yesterday, the gains were undersized and unimpressive in a fashion that suggests the bull camp is unmotivated. However, January platinum forged a six-day high this morning, regained the $950 level, and is expected to draft some support from a 12-month price forecast of $1300 from an Asian financial firm overnight.

MARKET IDEAS: Even though we leave the bull camp with a minor edge, the precious metals markets lack a definitive bullish fundamental storyline and upside momentum. Furthermore, recent gains have been forged on extremely low trading volume and almost no change in open interest. While gold and silver may gain a bullish fundamental story from Chinese inflation readings tonight and from Friday's US monthly consumer price index release, that could leave the market waffling in the coming two sessions. 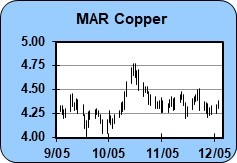 With the copper market forging a rally of $0.19 in just 4 days on declining volume and open interest, it would not appear that the bull camp has buyers waiting in the wings. On the other hand, LME copper warehouse stocks are 1,700 tons away from a 16 ½-year low, Chinese copper cathode production has expanded, and there continues to be a general risk-on vibe in the marketplace. Some traders expect Chinese copper demand to improve in anticipation of a reduction in power restrictions (which usually allows construction activity to pick up), while others see ongoing tightness in the US housing sector as another source of demand. However, while March copper managed to regain its 200-day moving average early this week and Chinese copper imports in November reached the highest levels since last March, the charts continue to favor the bear camp. Copper should continue to draft support from the latest Chinese stimulus, and it would certainly benefit if yesterday's risk-on environment extends into another session.

MARKET IDEAS: With the March copper contract continuing to waffle around both sides of its 200-day moving average ($4.3185), the bull camp has a slight edge heading into the third trading session of the week. With favorable Chinese economic data earlier this week, tightening world exchange stocks and less fear of the Covid variant, we see $4.25 support firming and the March contract capable of rising above $4.35.


By The Hightower Report