Without looking... Think quick! What is the price of Gold right now? (HINT: If you read last week's missive, you already know the answer).

Spot-on there, Squire, for the simplest reason that the price of Gold is always in the 1780s. Don't believe it? Feel free to verify the following, (you cannot make this stuff up):

Indeed should Gold have just died, an epitaph of solely "1780" is perfectly apt. "Charles, is this Gold's gravestone?" ... "That, my dear Dysphasia, is a rhetorical question."

For just as the price of Gold was relatively "fixed" post-Issac Newton in the $18-to-$20 range, then again relatively "fixed" post-Bretton Woods in the $34-to-$35 range -- until 1971 upon Richard Nixon nixing such Gold Standard -- today we might say Gold is relatively "fixed" in the 1780s by "The M Word" crowd. Indeed, the "manipulation" motif is gaining more and more mainstream mention of late, the market depth of bids and offers rotating marvelously around 1780 as a centerpiece price. And it never being wrong, the market is what 'tis today: 1780. But broad buying sway can this allay: for Gold remains extraordinarily under-owned, an understatement at that. 'Course, the day to sell your Gold is the day everybody wants it, even at a five-figure price.

But for now, why own a dense, ductile lump of rather incongruous rock when with a mere tap of the mouse one benefits many times over from an increasing array of shiny objects permeating the markets, be they earningless stocks or cryptocrap or even non-fungible tokens? Certainly they make one and all cocksure and feeling fine! (Until suddenly the objects vanish, but we're not supposed to say that).

And how about Sister Silver of late? Hardly does she feel very great. Whilst Gold has been ad nausea sedentary in forever wallowing 'round the 1780s, and more accurately being -3.0% month-over-month, Silver senselessly has skidded -10.9%! Quite obviously, Silver has not been adorned in her precious metals pinstripes. So it must instead be that she is sporting her industrial metal jacket, right? For Cousin Copper clearly must be going over the cliff. But no, 'tisn't. Rather for the same stint, Copper is off but a mere -0.5%. What To Figure, eh? Last week we wrote of market dislocation: Silver has become so dislocated as to have been left naked! Here are the percentage tracks of our BEGOS Markets' metals triumvirate from one month ago-to-date (21 trading days): 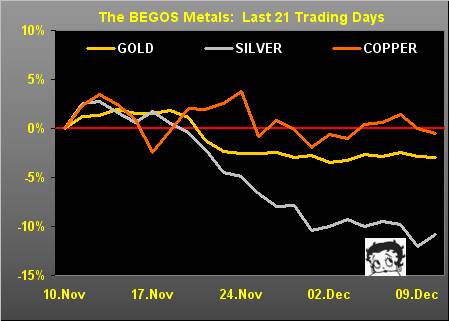 So as Silver sinks even as Copper remains buoyant -- which makes no sense -- Gold sedentarily sits. In settling out the week yesterday at the aforementioned 1783, price on a points basis traced its narrowest week (since that ending on Valentine's Day 2020) in the last 22 months, and the narrowest week on a percentage basis since that ending nearly two years ago on 22 December 2019. So narrow was last week's trading range that it barely shows as the rightmost nub on the graphic of Gold's weekly bars from one year ago-to-date: 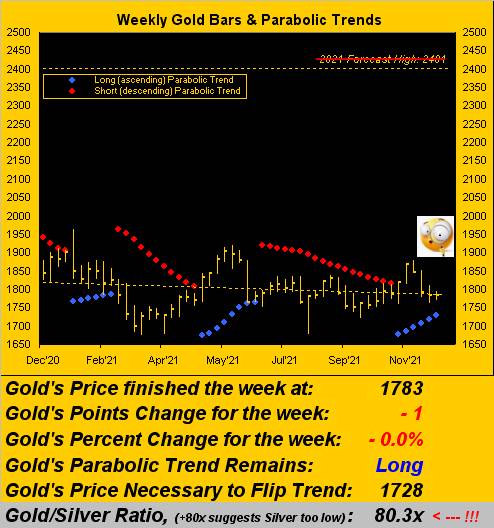 Economically, the past week of incoming metrics were inflation-persistent. There was an upward revision to Q3's Unit Labor Costs along with a downward revision for the quarter's Productivity: that's Classic Stagflation, right there! Too, November's CPI remained stubbornly high with an +0.8% reading, (which for those of you scoring at home is an annualized pace of +9.6% ... are ya gettin' that with all the dough you've got sitting in the bank? Oh right, you put it all in the stock market). October's Trade Deficit backed off from that for September, whilst Consumer Credit eroded and Wholesale Inventories somewhat bloated. December's University of Michigan Sentiment Survey regained the 70 level, but remains below the COVID-era average of 77. Put it all together and the Economic Barometer lost of bit of tether:

With further respect to rising everything ('cept the metals), Dow Jones Newswires during the week ran with "This Inflation Defies the Old Models. Neither supply or demand by itself is increasing prices; it's an unusual combination of both." True enough: we've tons of money chasing not enough stuff, the cost of which to produce and supply is ever-increasing. This is what happens when the system is flooded with money. Everybody's loaded, so why the heck seek work? Especially given your shiny object investments see you retiring at 35. (Or as a French friend oft texts to us: "So gréat!")

Meanwhile come 21 December (that's Tuesday a week), some 40% of StateSide obligations shan't be payable (per analysis from the Bipartisan Policy Center) given the debt ceiling then being reached. "Hey Shinzō, that you? Joe here. Hey listen: we may have to skip that next interest payment. My Janet who? Hello Shinzō? Hey! Are you still there, buddy?" Or something like that. Which leads us to three critical, succinct questions:

Just askin'. In fact speaking of the latter, our "live" S&P 500 price/earnings ratio is now 48.6x, (another of our honest calculations that the FinWorld elects not to perform). In fact, the "in" thing these days is to value a company -- should they not have earnings -- by revenues. (This is referred to as "Dumbing-down beyond stoopid"). For example, we read this past week that such valuation method is apparently touted for a shiny object called "Snowflake". Last year this object's top line was +$592M and its bottom line -$539M, a truly symmetrical snowflake swing of -$1.1B. Moreover, we read (courtesy of NASDAQ) that negative swings are to be again seen in '22, '23 and '24. And snowflakes do melt. (See 2000-2002). Just sayin'.

'Course to be fair, Gold's price as a function of valuation continues to melt. The U.S. money supply continues to rise, yet Gold's price remains hardly wise, (except in the guise to load up on this prize). To wit, our two-panel graphic featuring on the left Gold's daily bars from three months ago-to-date and on the right price's 10-Market Profile. The good news per the "Baby Blues" having just ceased their fall right at the -80% axis is that price's recent freeze in the 1780s may be the consolidative haunch from which to launch. And obviously, those incessant 1780s clearly dominate the Profile:

Silver's like graphic shows both price and the "Baby Blues" (below left) clearly more skittish than Gold, whilst her Profile (below right) sees her singin' the blues. (But grab some Silver whilst you've nuthin' to lose!) 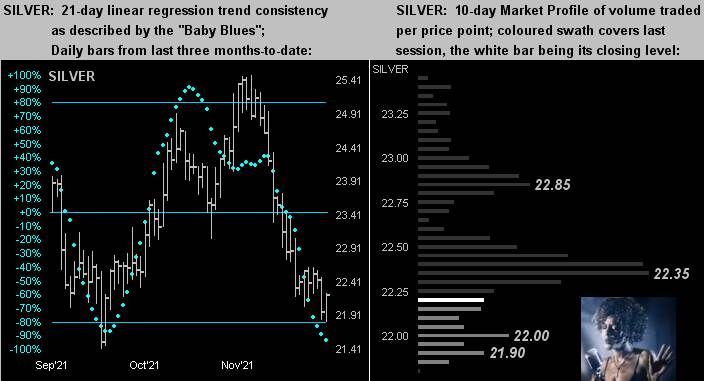 Grab a glimpse too at The Gold Stack:

Gold's Value per Dollar Debasement, (from our opening "Scoreboard"): 4015

And then there's next week. 15 metrics are scheduled for the Econ Baro. And the mid-week cherry? A policy statement from the Federal Open Market Committee. "Oh no, not again!" Kinda like those radio hits: good or bad, they just keep on comin'! So c'mon and get yourself some Gold, and don't forget the Silver too! 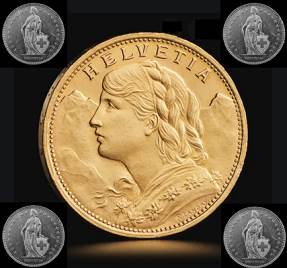