Is it time for lower grade nickel sulphide projects to shine?

This article first appeared in the November 2021 edition of Battery Materials Review.

The bidding war over Noront Resources and the flurry of nickel offtake agreements announced between automakers and nickel producers seems to suggest that EV and battery industry participants have (at last) woken up to the impending scarcity of class 1 nickel resources. As we discussed in November's other BMR Focus article, we believe that ternary (high nickel) chemistries will remain vital in EV land for at least the next decade, probably longer, which means that the demand story for nickel will remain intact. With the bidding war for Noront continuing, we ask - what next for nickel?

We believe that it’s time for lower grade nickel sulphide projects, historically shunned by the market, to start to shine.

Nowhere is this more evident than in the acquisition of the Santa Rita mine by Sibanye-Stillwater, which was announced in October. The overall resource grade of the project (open pit and underground) amounts to 0.54% nickel, but the takeout multiple is much higher than the previous multiple for a major low grade sulphide project – the Dumont project, which was acquired in 2020. 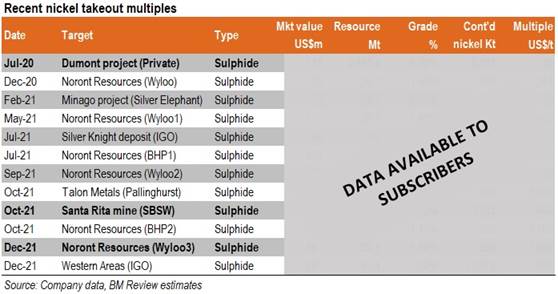 The involvement of BHP in the bidding war for Noront shouldn’t come as a surprise either. BHP’s decision to move its primary exploration office from Chile to Canada shows, in our view, the likely direction of travel. The fact that Rio Tinto has also been active in North America highlights for us that the big boys are starting to look at this key mineralogical region once again.

Given that production focus in the world of nickel has always been on higher grade projects (Norilsk, Western Australia), many investors turn their noses up in the air at the thought of investing in a low grade, high tonnage deposit. But actually this view is rather blinkered, and to explain that let’s use the example of copper.

Earlier on in my career as an analyst I covered the Chilean copper producer Antofagasta. It operated the highly-successful Los Pelambres copper porphyry mine in Chile. Looking back at my model for 2013, the head grade mined was 0.69% copper (excl. by products) and the plant throughput was 64Mtpa. It was a hugely profitable operation with EBITDA of US$2bn pa and an NPV of something like US$11bn with a US$3.25/lb (US$7166/t) long-term copper price.

Now, let’s look at Canada Nickel’s Crawford project. Its May 2021 PEA supports a project with initial mill capacity of 42.5Mtpa, ramping up to 85Mtpa in phase 2 and potentially to 120Mtpa. Nickel head grades would start at c.0.32%, falling to 0.25% by phase 3 and nickel production in phase 1 would be 23Ktpa rising to 42Ktpa by phase 3. Based on the company’s cost, and nickel price assumptions of US$7.75/lb, the project could yield EBITDA of US$287m pa in phase 1, rising to US$538m pa thereafter. 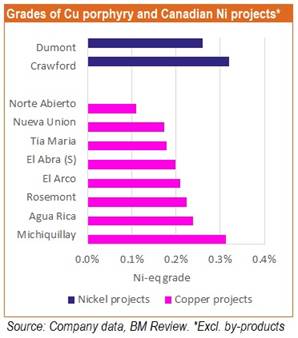 Now, if I convert Los Pelambres’ 2013 copper grade to nickel equivalent, then its head grade would be 0.34%. I will also note that Los Pelambres remains the jewel in Antofagasta’s crown today, but in the intervening period its head grade has fallen to 0.65%, making it bang in line with Canada Nickel’s Crawford project initial head grade in nickel equivalent terms. I will note that the Crawford PEA is based on an initial 25 year life of mine but in my view there would be plenty of material available to extend the mining life of the project further.

The Crawford project comes with an upfront price tag of US$1.2bn, and the similar Dumont project a cost of US$1.1bn, which aren’t to be sniffed at, but new copper porphyry projects similarly come with price tags in the billions and nobody worries about them. And, in addition, new copper porphyry project resource grades are falling. Most projects in development now in the Americas have resource grades sub 0.5% copper…

Well, it kind of depends what your preference is. Australian investors often get sniffy about lower grade deposits abroad, but the fact is that from a mining point of view it’s simpler and cheaper to mine a large tonnage open pit than it is a high grade, underground occurrence, particularly as those high grade mines get older and the operating areas move further away from the shaft or decline.

Most Australian sulphide projects are in the ballpark of 1.2-1.8% nickel in resources, but the occurrences are much smaller. This in turn supports lower production over shorter mine lives. This is why you don’t find too many Majors operating in WA. While the projects are often very profitable they don’t scale enough to excite the Majors. 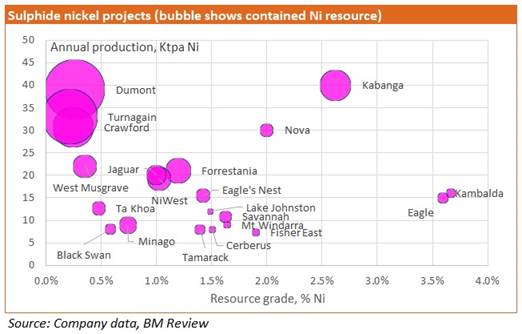 Increasingly then, the Majors are looking to the sort of bulk tonnage, lower grade sulphide projects which have historically been shunned by investors. There’s another consideration though, and it’s going to be an important one for battery grade nickel projects.

Environmental considerations to come to the fore

We’ve already seen a number of Majors flirt unsuccessfully with low grade, bulk tonnage laterite nickel projects. This has been an unmitigated failure for most majors and, in fact, only the Chinese and a few isolated Western groups have managed to successfully operate laterite projects. One of the key negative aspects of laterite projects is their power intensity. Where laterite projects operate in regions where coal is a key component of the grid (Indonesia, New Caledonia) they are not clean at all. And this is likely to be a major concern for Western World OEMs which are very focused on the ESG impact of their supply chains.

But there’s also an issue with that in Australia. Australia is not only a big user of coal, Western Australia where a lot of this nickel capacity is located, is a large user of natural gas. While nat gas is cleaner than coal, it’s still a hydrocarbon, which means that these nickel projects are still highly carbon-intensive.

But there are regions of the world where most of the power is derived from clean sources, such as Brazil and Canada where energy can be derived entirely from HEP. From the point of view of OEMs, battery raw materials derived from these areas are likely to be more attractive than those derived utilising dirty power sources.

So, for battery raw materials, I would suggest that investors look much more closely at lower grade nickel sulphide projects emerging in Canada and Brazil than higher grade, highly-valued projects in Western Australia. I believe that those types of projects and regions are going to be a key focus for the EV industry in coming years.