Christmas Greetings to Everyone Everywhere.

With but five trading days remaining in 2021, Gold -- as we'll show -- traditionally is the gift that keeps on giving into year-end. But first, we've this:

Query, (courtesy of the "Fun With Numbers Dept."):

Given across these past 11 years the +2.4x increase in the U.S. money supply, even as tempered for the duly noted +17% increase in the supply of Gold itself, ought its price nonetheless now be 2747? After all, currency debasement is the ultimate, primary driver of price, lagging as 'tis been.

Further by the above opening Gold Scoreboard which comprehensively accounts for 41 years of currency debasement, more than double present price is Gold's valuation today of 4030! Thus analogous in reprising the infamous query of immortal football coach Vince Lombardi: "What da hell's goin' on out dere??" 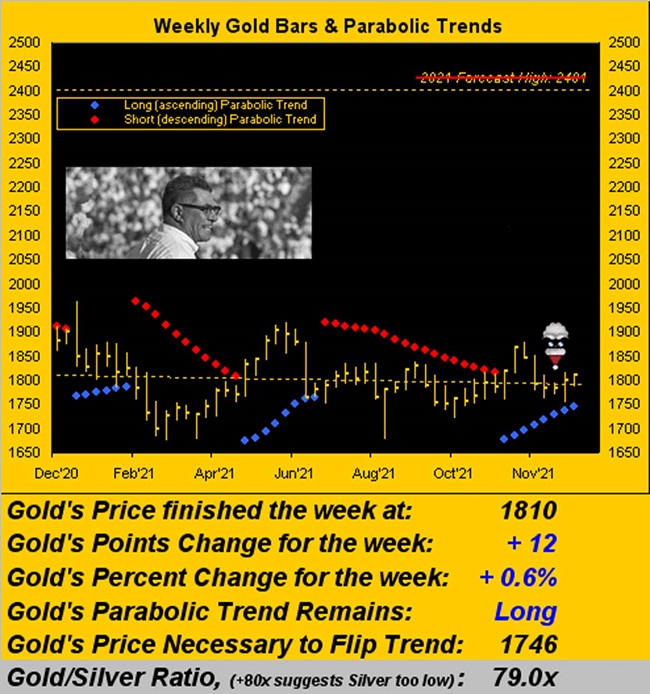 'Course, you regular readers of The Gold Update know exactly what's goin' on out dere. 'Tis "The Age of the Shiny Object". Why purchase Gold -- as stated just +31% from this day of days 11 years ago -- when by merely owning the S&P 500 itself you've recorded a gain over same of +276%? Better still, how about your cryptocrap with its gains of +∞%? But wait, there's more: How are those NFTs workin' out for ya? (We think of them ultimately as "non-fundable tokens"). Then, too, is "The M Word" crowd: "Churn it and burn it, baby!" Or as Carly Simon might have sung it from back in '71: "Manipulation..."

Regardless, with the S&P now at an all-time "Santa Claus Rally" closing high of 4726 (thank you record level of stock buybacks), Stoopid is sleeping securely because should the market dip from here, it always comes back, right? Arithmetically that's been undeniably true. Undeniably true as well by its historical track is the S&P's price/earnings ratio (our "live" read now 49.5x) having always returned to its median (at present 20.4x since the Index's inception nearly 65 years ago on 04 March 1957).

So here's the crux: we've already accounted that year-over-year earnings' increases from a "shutdown 2020" to an "open 2021" were not sufficient enough to materially boost the "E" of the P/E such as to mitigate the ever-rocket-boosted "P". Therefore: the next reversion of the P/E to its 20.4x median essentially requires a move of the S&P from today's 4726 level down to 1948, (i.e. a -58.8% "dip"). But Stoopid worries not: "Been there, done that, it always comes back." Even as this time 'round rates rise, in turn ramping up that variably-priced interest on Stoopid's fully drawn credit cards. "Got Gold?"

For which there is some good news, both aft and ahead.

■ Aft - Whilst during each of this past Monday, Tuesday and Wednesday Gold dealt with dilly-dallying 'round as usual in the 1780s, price finally saw its way clear to close on Thursday above 1800, its first weekly settle north of said number since that ending 19 November.

■ Ahead - Per this missive's title, 'tis time for Gold's annual finale rally, (our now pointing that out meaning it shan't occur). But it being a festive day, let's stay positive as traditionally is Gold's wont through the final five trading days of the year. For as the following table displays, Gold during this stint has risen in 17 of the 20 completed years thus far this millennium. We thus anticipate that for this 21st year of the 21st century, Gold shall be higher in a week's time than today's 1810 level: 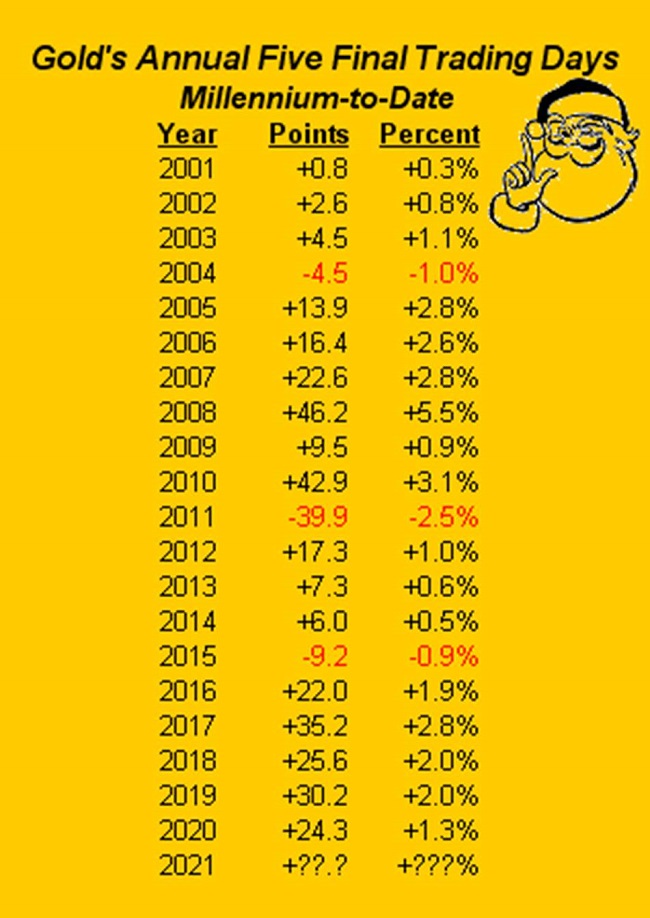 That is a statistical gift. Now here's one that is technical:

The above graphic depicts Gold's daily "price oscillator" (a mainstay of the website's Market Rhythms page) during 2021's fourth quarter-to-date. The rightmost wee blue nub just crossed to positive, the trader's signal thus being to get Long Gold. The prior 12 such Long signals (dating back to 27 March 2020) saw upside price follow-throughs averaging as much as +77 points which in that vacuum from 1810 would be to 1887, the more conservative median being +31 points to 1841. No guarantees 'natch, but nicely on time to synch with Gold's annual finale rally should it come to pass.

Meanwhile, unsurpassed for better than three years until just now is the current level of the Economic Barometer, which with but a week to run in 2021 saw this past week's set of 13 incoming metrics move the Baro to its highest oscillative level since 31 July 2018.

Yes, there were a few weak links in the data: Q3's Current Account Deficit sagged to its worst level since Q3 2006; and although the quarter's final read on Gross Domestic Product increased to an annualized "growth" rate of +2.3%, that was more than double-mitigated by the party-pooper Chain Deflator being finalized at a +6.0% "growth" rate. (For you WestPalmBeachers down there, that basically means there is no real GDP "growth", but rather "stagflation"; look it up). Too, increases slowed in November's Personal Income and Spending.

But highlighted were improvements in November's New and Existing Home Sales, Durable Orders and (not surprising should you follow the Baro) the Conference Board's Leading (i.e. lagging) Indicators. 'Course the real stinker was the Fed's favoured inflation read of Core Personal Consumption Expenditures coming in at an annualized pace of +6.0%. But, perhaps folks "just don't get it yet" given the level of Consumer Confidence (also per the Conference Board) rising in December to a five-month high. Here's the whole view:

With respect to the Baro's having re-attained the noted 2018 level, 'twas after that the S&P 500 then declined into the year's Christmas Eve by -16.5%. Not that history shall repeat same going into next year: we anticipate worse -- far worse -- either by our "Look Ma, No Earnings!" crash (per the aforementioned P/E assessment), and/or by Federal Reserve Vice Chair Nominee Lael "The Brain" Brainard's "Climate Change!" crash. Also there's now ever-increasing amount of "Oh My! Omicron!"

Still, upward economic gains along with increasing inflation strains both serve justice for the Fed to commence raising its Bank's Funds rate as early as 26 Jan. Which in turn means you'll have somewhere else to park your dough when the stock market doth over the cliff go. Get ready for "The Return of the Savings Account!" In theatres next Spring. 'Course far better than that, again: "Got Gold?" And don't forget Silver too!

All so stated, New York FedPrez John "It's All Good" Williams looks to the Fed's rate rises as an economic positive -- which to his credit -- has historically synched with the beginning of higher interest rates. And perhaps more costly money can be withstood, Dow Jones Newswires this past week having referred to U.S. household wealth as "vast". Indeed per a year-old survey from the Fed, the median StateSide household wealth level is $122,000. (Admittedly, we did not dig sufficiently deep into the data to divulge if that includes proceeds from the aforementioned fully-drawn credit cards).

Next let's fully draw our two-panel graphic of Gold's daily bars from three months ago-to-date on the left and the 10-day Market Profile on the right. Especially encouraging therein are Gold's "Baby Blues" penetrating up through their 0% axis in confirming the regression trend having rotated to positive. And the Profile shows the most dominant trading level of the past two weeks as (no surprise) 1787: 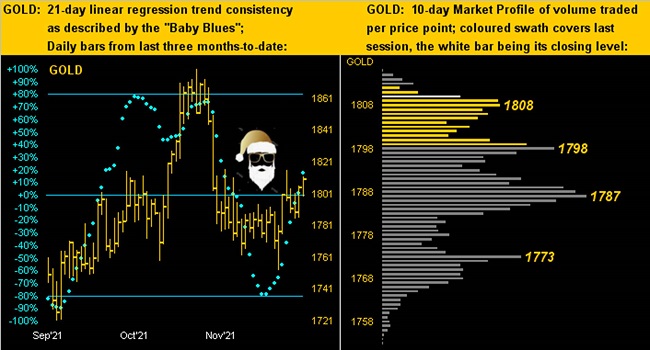 With the same drill for Silver, we see her "Baby Blues" (below left) in accelerating ascent, albeit the low 23s may be a sticky wicket there. Still, her Profile (below right) appears supportive for the mid-to-lower 22s, (and happy winkies to you too there, Sister Silver):

Time to wrap it up from here with this note: it again appears The World Elites' Economic Forum in Davos is being "deferred", the great convening over The Great Reset to instead take place toward early summer. Bit of an economic inflow delay there for little ole Switzerland, but we have it on well-vetted authority they'll manage. The small alpine nation may rank just 135th by size and 101st by population. But it ranks seventh in total Gold holdings and far and away first in per capita Gold wealth: there is one tonne of Gold for every 8,322 people which (in sparing you the math) is $7,672 per Swiss resident. (Italy is a distant second at $2,589).

"And Season's Greetings to you, mmb!"

Thank you, Squire, and our very best to you 'n yours, all the little Squires down the line, and absolutely as well to our star readers right 'round the world! Everyone take care, and don't forget the real star: Gold! 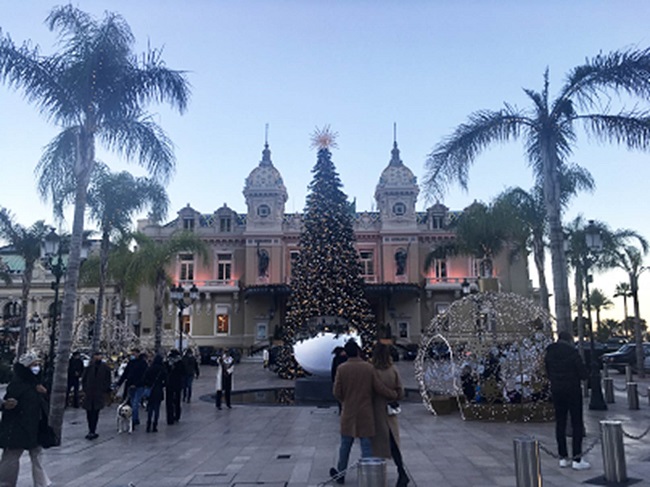