The debate about the nature of inflation is over. Now the question is what the end of transitory inflation implies for gold. I offer two perspectives.

Welcome, my son. Welcome to the inflationary machine. Welcome to the new economic regime of elevated inflation. That’s official because even central bankers have finally admitted what I’ve been saying for a long time: the current high inflation is not merely a transitory one-off price shock. In a testimony before Congress, Jerome Powell agreed that “it’s probably a good time to retire” the word “transitory” in relation to inflation. Bravo, Jay! It took you only several months longer than my freshmen students to figure it out, but better late than never. Actually, even a moderately intelligent chimpanzee would notice that inflation is not merely temporary just by looking at the graph below. 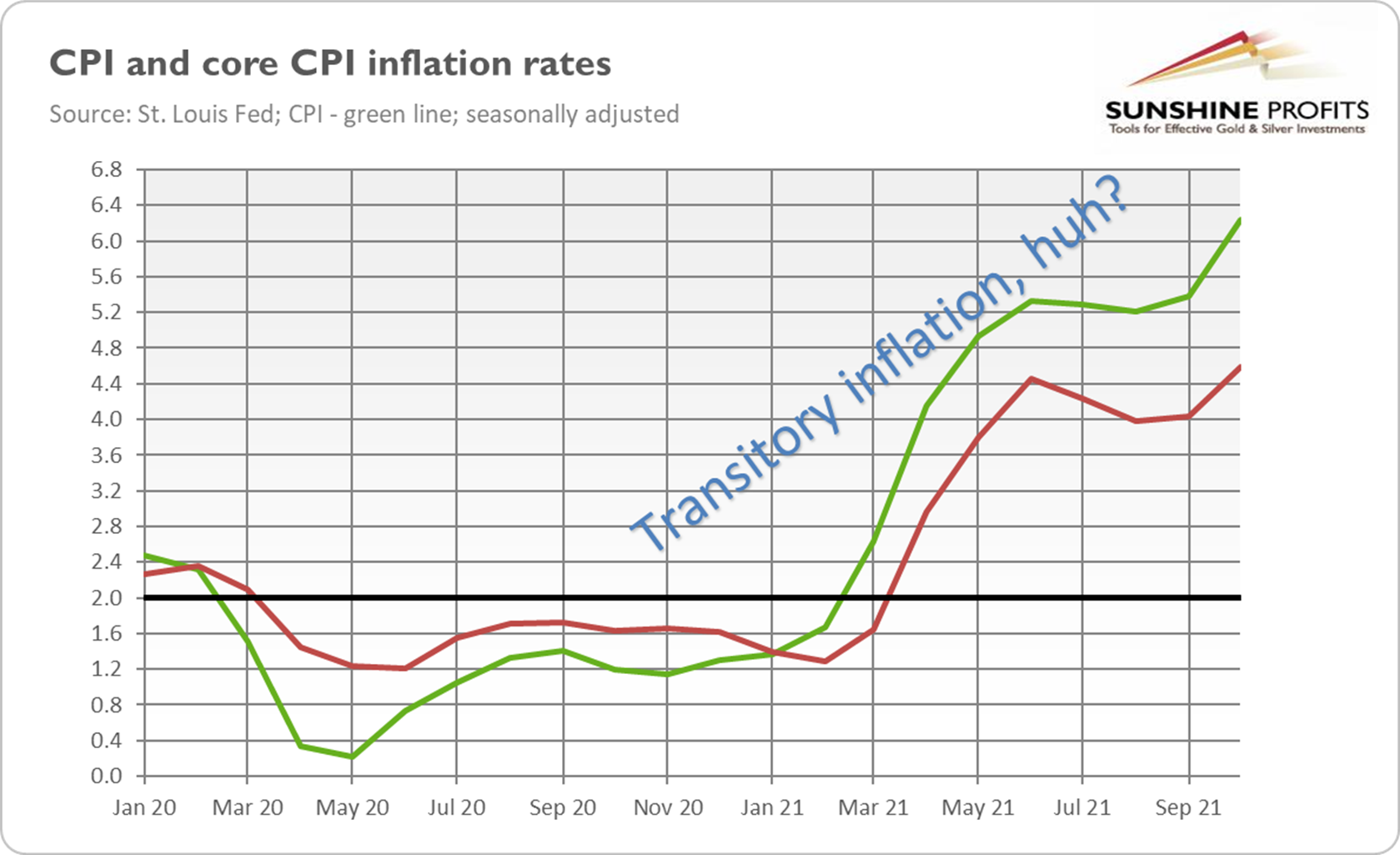 To be clear, I’m not predicting hyperinflation or even galloping inflation. Nor do I claim that at least some of the current inflationary pressures won’t subside next year. No, some supply-side factors behind recent price surges are likely to abate in 2022. However, other drivers will persist, or even intensify (think about housing inflation or energy crisis).

Let’s be honest: we are facing a global inflation shock right now. In many countries, inflation has reached its highest rate in decades. In the United States, the annual CPI rate is 6.2%, while it reached 5.2% in Germany, 4.9% in the Eurozone, and 3.8% in the United Kingdom. The shameful secret is that central banks and governments played a key role in fueling this inflation. As the famous Austrian economist Ludwig von Mises noticed once,

The most important thing to remember is that inflation is not an act of God; inflation is not a catastrophe of the elements or a disease that comes like the plague. Inflation is a policy — a deliberate policy of people who resort to inflation because they consider it to be a lesser evil than unemployment. But the fact is that, in the not very long run, inflation does not cure unemployment.

Indeed, the Fed and the banking system injected a lot of money into the economy and also created room for the government to boost its spending and send checks to Americans. The resulting consumer spending boom clogged the supply chains and caused a jump in inflation.

Obviously, the policymakers don’t want to admit their guilt and that they have anything to do with inflation. At the beginning, they claim that there is no inflation at all. Next, they say that inflation may exist after all, but is only caused by the “base effect”, so it will be a short-lived phenomenon that results solely from the nature of the yearly comparison. Lastly, they admit that there is something beyond the “base effect” but inflation will be transitory because it’s caused only by a few exceptional components of the overall index, the outliers like used cars this year. Nothing to worry about, then. Higher prices are a result of bottlenecks that will abate very soon on their own. Later, inflation is admitted to be more broad-based and persistent, but it is said to be caused by greedy businesses and speculators who raise prices maliciously. Finally, the policymakers present themselves as the salvation from the inflation problem(that was caused by them in the first place). Such brilliant “solutions” as subsidies to consumers and price controls are introduced and further disrupt the economy.

The Fed has recently admitted that inflation is not merely transitory, so if the abovementioned scheme is adequate, we should expect to look for scapegoats and possibly also interventions in the economy to heroically fight inflation. Gold could benefit from such rhetoric, as it could increase demand for safe-haven assets and inflation hedges.

However, the Fed’s capitulation also implies a hawkish shift. If inflation is more persistent, the US central bank will have to act in a more decisive way, as inflation won’t subside on its own. The faster pace of quantitative easing tapering and the sooner interest rate hikes imply higher bond yields and a stronger greenback, so they are clearly negative for gold prices.

Having said that, the Fed stays and is likely to stay woefully behind the curve. The real federal funds rate (i.e., adjusted by the CPI annual rate) is currently at -6.1%, which is the deepest level in history, as the chart below shows. It is much deeper than it was at the lows of stagflation in the 1970s, which may create certain problems in the future.

What is important here is that even when the Fed raises the federal funds rate by one percentage point next year, and even when inflation declines by another two percentage points, the real federal funds rate will increase to only -3%, so it will stay deeply in negative territory. Surely, the upward direction should be negative for gold prices, and the bottom in real interest rates would be a strong bearish signal for gold. However, rates remaining well below zero should provide some support or at least a decent floor for gold prices (i.e., higher than the levels touched by gold in the mid-2010s).