How high could lithium prices go?

It’s the question on everyone’s lips and we had a crack at answering it in the December issue of Battery Materials Review. It’s a difficult question because lithium prices are now in virgin territory (they’ve never been this high) and how do you model something when you don’t have a frame of reference? 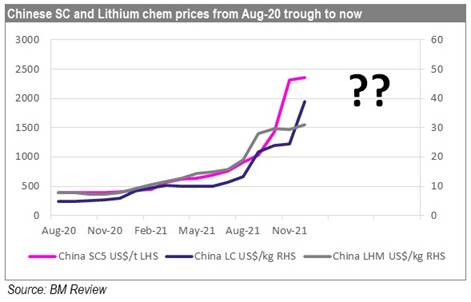 Well, you have to look at other materials to be your guide and that’s what we used in our approach. To cut to the chase, we suggest that lithium prices, which are already up 500% from the Q3/20 trough for SpodCon and 700% for BG lithium carbonate, could rise as high as 1300% from the trough.

So, to put that in plain numbers, that’s SpodCon prices of over US$5000/t and BG lithium carbonate prices of over US$60/kg in this cycle. That’s compared to SpodCon prices now of US$2360/t, China spot BG LC prices of US$38.8/kg and contract prices around US$20-25/kg. So, that’s still quite a big increase from here, for all those cautioning that the lithium event is over.

I’m not going to go into my methodology here. Feel free to subscribe to Battery Materials Review if you’d like to learn more about my modelling approach and its risks.

Maybe some readers think I’m nuts! Many people thought I was nuts as well when I forecast in August 2020 that lithium prices could increase four times from their prevailing levels. As it turned out, I was too conservative that time. Maybe I’ll be too conservative this time as well?

While we’re talking about overly conservative forecasts, I’d like to talk about what the sell-side are using in their models for stocks. I was updating my consensus forecast data this week and it makes interesting reading.

What does that mean? It means that equity analysts are massively out of the money on their price forecasts and that stock valuations are going to have to increase substantially from here. Just to give you an idea of how far analysts are out - naming no names, but a major US bank which famously downgraded the lithium sector in early-December is utilising a contract LC price of US$12.70/kg for 2022E, which is almost 50% below the Q4/21 contract price for LC!! There is only one broker on our list that has 2022 price forecasts in line with or above current spot prices. All the rest are below, many markedly so.

So, in a situation where the lithium market is going to stay in deficit, most sell-side houses seem to be implying that lithium prices will come down. Of course, they won’t if the market remains in deficit, so analysts will need to increase their price forecasts (likely substantially), which will have a knock-on effect on equity valuations.

To be fair, to some extent the market is already looking beyond the sell-side’s forecasts. That’s why stocks have overshot existing analysts’ price targets and we’re starting to see broker downgrades. But in this environment, I’m afraid I believe it’s the analysts that are in the wrong, not the market!

The changing nature of lithium pricing 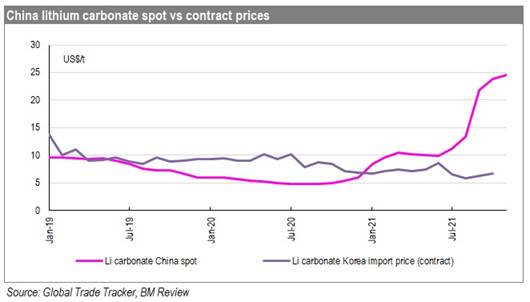 Which means that there is substantial potential for companies with a lot of exposure to annual price contracts to see a material uplift in realised revenues in Q1/22. Indeed, some are seeing it already. At its Q3/21 results, SQM noted that it expected selling prices to increase 50% in the fourth quarter. On our Recharge podcast this month, Ken Brinsden, CEO of Pilbara Minerals, talked about renegotiating longer term contracts with customers so that they are closer to spot pricing. He mentioned that his company’s contract prices were now c.US$1650-1800/t for CQ4/21 from under US$1000/t previously. I would suggest that they’re likely to go higher still in 2022.

This move from annual to quarterly pricing means that even those companies selling on long-term volume contracts will be able to take the benefit of increases in spot prices. The delay in pass through is shorter too. At the beginning of this year there was a 4-5 month time lag for price pass through. Now it’s closer to 1-2 months. This change in price realisations is not really being reflected by many sell-side analysts currently.

When will lithium prices fall?

This, of course, is the next big question in the sector. When we think back to the commodity supercycle in the 2000s, the price increase wasn’t a straight line event, and there were periods when prices fell back, as well as increased.

These fall-back periods were generally the result of one of two key drivers:

Now, for me, there is quite a substantial difference between the price behaviour of exchange-traded commodities like copper, zinc and crude oil compared to lithium. I don’t expect lithium prices to be so elastic to overall economic cycles because the major driver of lithium demand (the EV event) isn’t. So I don’t see driver (1) as a key driver for lithium prices.

I do see driver (2) as an important one for lithium, however. And I think in this context any slowdown in the rate of EV sales and/or start-up (restart) of large projects could create short-term supply/demand imbalances in the sector. 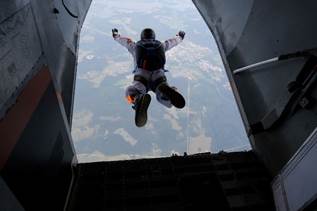 While we’re seeing ongoing expansion of capacity in the Atacama, for me it’s going to be hard rock start-ups in Western Australia and elsewhere which have the potential to destabilise the market in the next 12-18 months. However, due to Covid delays, I don’t expect any material impacts until the end of 2022 at the earliest, most likely early 2023.

That means I’m pretty happy that the lithium market will stay in deficit for most of 2022.

Beyond that there is a fair amount of capacity that will start to come on, but I think most of it is going to be offset by increasing demand. I expect lithium prices to be a bit more cyclical than they have been so far, but I would still expect them to be on a generally rising trend over the next several years.

The reason being that the thing that’s holding back our EV sales forecasts currently is a likely shortage of lithium. As lithium comes into the market, more batteries can be made and more EVs can be sold. I don’t expect a long-term imbalance to occur at any time during this decade.

I know a number of sell-side analysts are not as positive as myself and many of the other industry specialists, but I would suggest that some non-specialist analysts are getting technical issues wrong in their supply/demand modelling. The most significant errors that I see in models are:

A notable sell-side house which has a very bearish view on the lithium industry doesn’t seem to have included any of these factors in its supply/demand model, which is calling for lithium prices to go below what I regard as the marginal cost of production from 2023 onwards. Needless to say, I don’t regard their research as top quality!!

But to all seasons, there must come an end. And the end will come for the lithium price event, be that in the second half of this decade, or in the early 2030s. It will come, as with any raw material price cycle, because there will be an overinvestment in new supply. And, when that new supply comes into the market, prices will fall.

How low can prices go? Marginal production cost to rise

But how low will lithium prices fall? Well, I would suggest that short-term corrections are likely to be of the order of 20-40% but when the collapse comes, it could be much more significant than that. 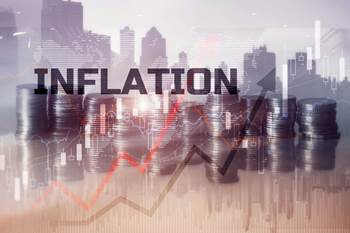 Added to which – I’m very much of the view that we’re moving into a high inflation decade, so labour costs, energy costs, transportation costs, mining costs will all increase over the next 5-10 years. That’s going to drive marginal costs up as well.

I’ve written about this a number of times in BMR so won’t labour the point here, but it’s my view that the marginal cost of production of lithium chemicals by the mid- to late-2020s will be 40-50% higher than the marginal cost was in 2019-20. So I don’t believe that lithium prices will ever go back to the 2020 trough levels.