While this news is very exciting, SMRs are not likely to contribute meaningful amounts of carbon-free power for another decade. Licensing and the transition from blueprint to operating a reactor are crucial and complex processes that should not be rushed. While these brilliant and fascinating designs are being readied for commercial deployment, we need a bridge that reduces carbon emissions today.

The goal of a "power uprate" is to increase the gross electrical output of the nuclear power plant, while maintaining adequate safety, design and operating margins.

Less newsworthy technological advances are making a critical immediate difference and have been doing so over the last two decades: namely, nuclear power plant life extensions and power uprates. These two types of capital improvement have made a potent difference and will continue to bolster carbon-free power generation in the U.S. and elsewhere. These technologies are proving to be impactful for environmental progress and power supply today.

Life extension and uprate technologies provide immediate solutions to maintaining and increasing power capacity in existing reactors. As shown in Figure 1, since 2001 global net capacity has increased from 352.72 GWe1 to 392.61 GWe, an 11% increase, while the number of operational nuclear power plants has not increased significantly (438 vs. 442). Some of this is attributable to smaller reactors being replaced by larger ones, but the majority of the increase is due to improvements in existing reactors. 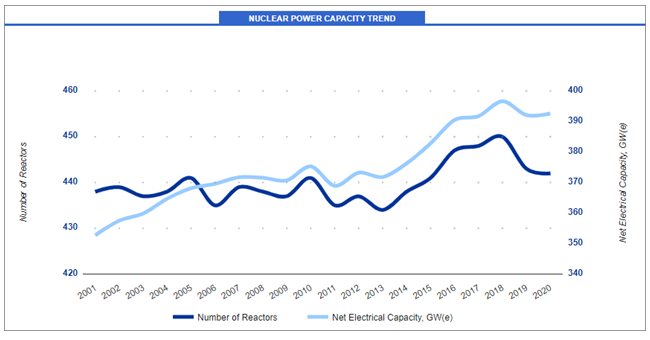 Source: IAEA. The net electrical capacity measures the sum of reference unit power (net capacity) of reactors in operation within and at the end of the reported years.

To date, the Nine Mile Point Nuclear Station Unit 2 reactor boasts the highest U.S. capacity uprate by adding 173 MWe2 to its annual capacity through its major 2011 uprate. 173 MWe represents enough electricity to power an estimated 80,000 households in New England for one year.3 Located outside the city of Oswego, NY, on the shores of Lake Ontario, the Nine Mile Point Unit 2 reactor began operations in 1988, while Unit 1 began operations in 1969 and is the oldest operating reactor in the U.S. 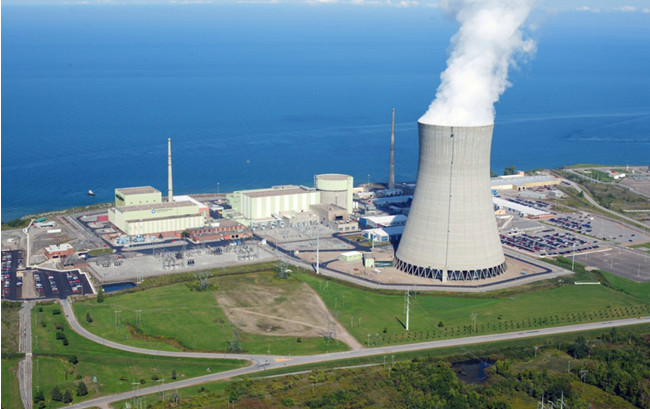 Let's consider SMR technology in more detail. The tidy acronym SMR makes it feel as if small modular reactors are a uniform category, but there's an enormous range of designs in development for commercial applications — 70 different designs as of 2020. Some SMRs are just smaller versions of traditional reactors. Others are categorically different. Some use spent fuel as an input. Some use molten salt, gas or liquid metal for reactor temperature control and heat transfer. Some are classified as micro SMRs, producing as little as 10 MWe, while many are designed for a capacity of about 300 MWe.

Figure 3. More than 70 SMR Designs are in Development Today 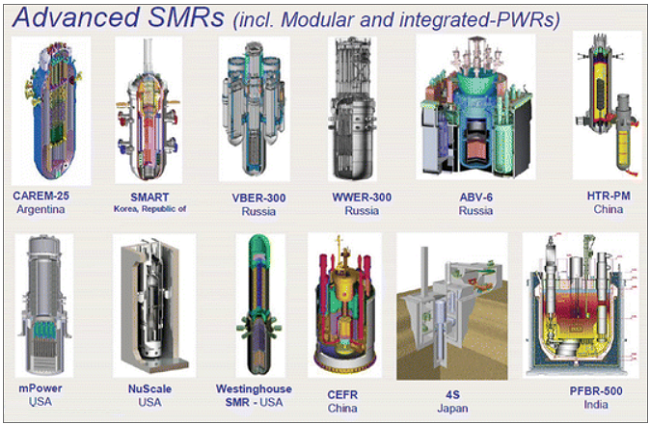 These differing characteristics are why most SMRs, especially the technologically innovative ones, are still in early stages of development. New technology means longer timelines for regulatory approval. When it comes time for construction, SMR designs could also face the political barriers that traditional reactor projects have encountered. The SMR solution is likely to prove revolutionary in efforts toward greener grids and universal energy access — but we need to be realistic and realize that it will take some time.

While we await the potential benefits of SMRs, we can capture immediate benefits by updating existing nuclear reactors. The already-installed capacity of reactors in the U.S. is an enormously valuable and stable source of carbon-free energy, however, the reactors are aging. Most of today's working reactors were built in the 1970s, 1980s and 1990s, putting them past or near the end of their original 40-year operating licenses. It's important to note that the original 40-year operating licenses in the U.S. were conservative. Existing infrastructure and components can last several decades longer when properly maintained. With technology updates, it is also possible to increase the power capacity of existing reactors by a substantial amount. With sufficient investment, utilities can extend the safe working life of their installed reactors from the original 40 years up to at least 50 years and even 80 years in many cases, and potentially even longer. We see substantial economic, environmental and political advantages to making these investments.

The average age of the 96 U.S. commercial nuclear reactors is about 40 years. Nine Mile Point Unit 1 is the oldest operating reactor; it began commercial operation in December 1969.

In terms of maintenance and upgrades, nearly every nuclear power plant component can be replaced or upgraded. The containment building itself, the turbine, the condenser, the pipe system, the pumps and backup generators can all be upgraded or replaced. The instrumentation and control systems in the plant will at some point be updated to digital versions since most were installed in analog form in the 1970s or 1980s.

Figure 4. Life Extensions are a Strategic Bridge for Nuclear Power 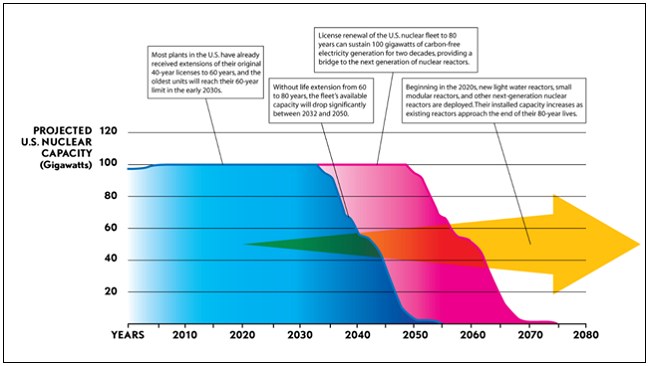 Only the reactor pressure vessel, which houses the core itself, is not considered replaceable because it is such an enormous component forged out of a single piece of the highest quality steel. With the entire plant built around this 600-ton unit, replacing it is not typically feasible. The vessel does degrade to some extent over time from radiation, becoming "embrittled", but because of the quality of the steel, it is a very slow process. Engineers are able to monitor the embrittlement of the vessel to ensure its continued safety. The reactor pressure vessel head — the "lid" of the core that houses many openings and pipes — can be replaced.

All such investments extend the working life of a power plant and, in many cases, include updated monitoring tools that further enhance the plant's safety.

A Compelling Payback Profile for Utilities

These investments usually have a compelling payback profile for utilities. Recall that the economics of nuclear power are about the depreciation of capital investments in the initial contraction because the fuel is such a small relative cost. Utilities use their nuclear reactors as baseload power because it maximizes the value they get from their investment and because it's such a reliable source.

Upgrades and other life extensions also sidestep the political debates that plague new nuclear projects. Every additional year that a utility can get out of an installed reactor is a benefit, not least of all for the environmental impact of the carbon-free power it generates.

An uprate is any change that increases the power output of a machine or system. For nuclear power plants, uprates are another appealing way to maximize existing economic and political investments and to compound the environmental benefits of carbon-free nuclear power.

Reactor uprates fall into two categories: thermal and electrical. Thermal uprates are about getting more power out of the reactor itself. The original generation of reactor designs turned out to have significant margin to work with — with advances in instrumentation and measuring equipment, many plants have been able to increase the reactor power output while staying well within conservative safety limits.

Electrical uprates are realized by installing bigger and better turbines, generators and transformers which can generate more electricity from the same amount of nuclear-generated steam. With advances in technology, this kind of upgrade can increase power capacity substantially, as much as 10%. Most reactors need to replace these pieces of equipment towards the end of the 40-year operating license anyway, which paves the way for significant life extensions on top of the added electrical output.

The Impact on Power Output and Uranium Demand

It's best to look at the impact of uprates in terms of how they increase the capacity of installed reactors. From the 1970s to the end of 2021, U.S. nuclear power capacity increased by 8,000 MWe because of uprates (see Figure 5). This is nearly equivalent to adding eight new nuclear reactors, given that new reactors are being built to 1,000-1,100 MWe capacity. The value is even higher when we factor in the political "investment" and licensing costs required to bring a new nuclear reactor to life — it's far more efficient to boost capacity through uprates. Uprates are also extremely cost effective: the average uprate is estimated to cost approximately $250-$500 million, while each new 1,100 MWe plant costs between $6-9 billion.

Figure 5. Through Uprates, U.S. has Added Capacity of ~ 8 New Reactors 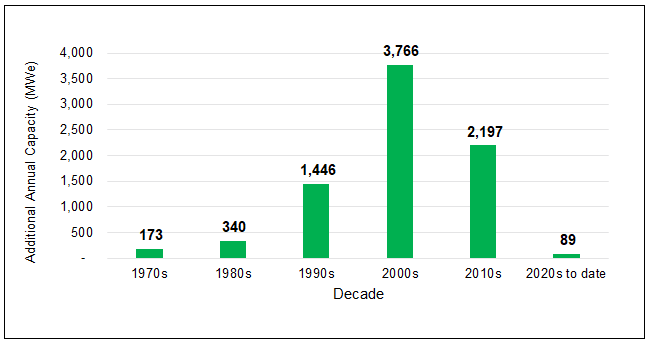 Extensions are just as valuable, though less quantifiable in apples-to-apples terms. The benefit of extended capacity multiplies every additional year of operation — especially in terms of the environmental impact. It helps to imagine that, if these plants were retired, their power output would be replaced at least partially by carbon-burning sources.

In terms of uranium demand, thermal upgrades directly impact demand, increasing the annual consumption of nuclear fuel without changing the number of reactors.

The newly passed Infrastructure Investment and Jobs Act should support life extensions and uprates in the coming years. The bill allocates $6 billion to prevent the retirement of existing nuclear plants, administered through credits in the Civilian Nuclear Credit program. This funding is earmarked for nuclear plants that are losing money and would otherwise retire, and it prioritizes those using domestically produced fuel, according to the Department of Energy (DOE). The bill also includes $2.5 billion for advanced nuclear development through the DOE's Advanced Reactor Demonstration Program. This program will fund critical projects like the Natrium Reactor Demonstration Project in Kemmerer, WY, an SMR being spearheaded by Bill Gates' nuclear innovation start-up TerraPower, LLC and GE Hitachi Nuclear Energy (GEH).

The infrastructure funding will help struggling operators, but it will not be the main driver of future life extensions and uprates. Continued investment will be driven by the traditional economic and environmental benefits to utilities. A potential game changer is a national or global carbon credit system that overnight would make any operating nuclear power station into a potential gold mine. Therefore, it is imperative both from an environmental and economic standpoint to keep existing reactors from shutting down. Meanwhile, the extensions and uprates to date have already preserved and extended nuclear capacity in the U.S. to a strong degree, supporting continued demand for uranium.

In conclusion, although nuclear power plant life extensions and uprates seem far less glamorous than promising SMR technology in development, they hold the power to boost carbon-free electricity production in the interim and provide a bridge to a future date when new SMR technologies will be commercially available.