History shows that whatever the ongoing regime is (be it inflation, disinflation, or accelerating inflation), Gold usually bottoms around the start of a Fed rate hike cycle.

Historically, Gold has tended to perform well (in varying degrees) amid rising short-term rates. However, unlike in the 1970s and 1980s, most recently, the start of rate cuts was a huge catalyst for Gold. 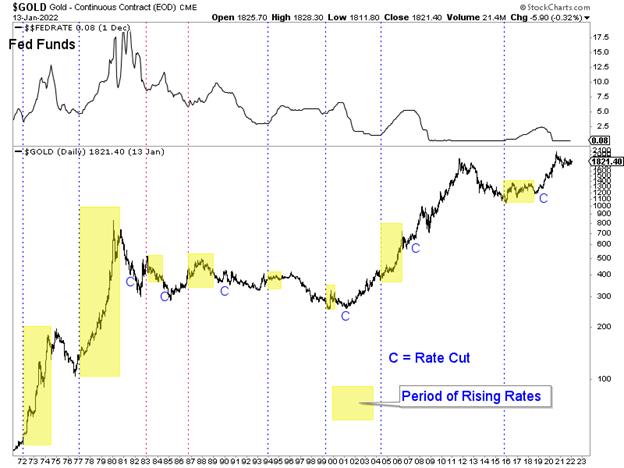 How Gold performs after the initial rally will depend on the type of regime that transpires.

In the chart below, I plot Gold's performance following the start of the last three rate hike cycles. Average 2 presumes the beginning of the 2015-2018 cycle was December 2016, rather than December 2015.

In most scenarios, the first 12 months entails a rebound and then a correction. Gold will continue to rise if there is accelerating inflation (like in the 1970s) or rising inflation expectations (like in 2005). However, if neither transpires and the Fed can continue hiking, Gold will not begin the next leg higher until the Fed executes its final hike.

If we get more fiscal stimulus, that could put Gold on the 1970s or mid-2000s path in which Gold would rise for the duration of the rate hike cycle.

The market assumes no fiscal stimulus and is pricing in the Fed, stopping around 1.50% in 2023. If they had to stop sooner, pause their hikes or stop altogether, it obviously would be more bullish for Gold.

In any case, the immediate outlook is clear. While there is a risk Gold could decline, it would set up for a major bottom in March or April, when the Fed executes the first rate hike.

With that being said, you have to put yourself in a position to take advantage, and you have to make sure you buy the right companies. I suspect that March and April will be the time to buy future 5 and 10 baggers.