Copper is coming off a historic year during which its prices broke records on not just one, but two, separate occasions, peaking at $4.76/lb or $10,476/t in mid-October. 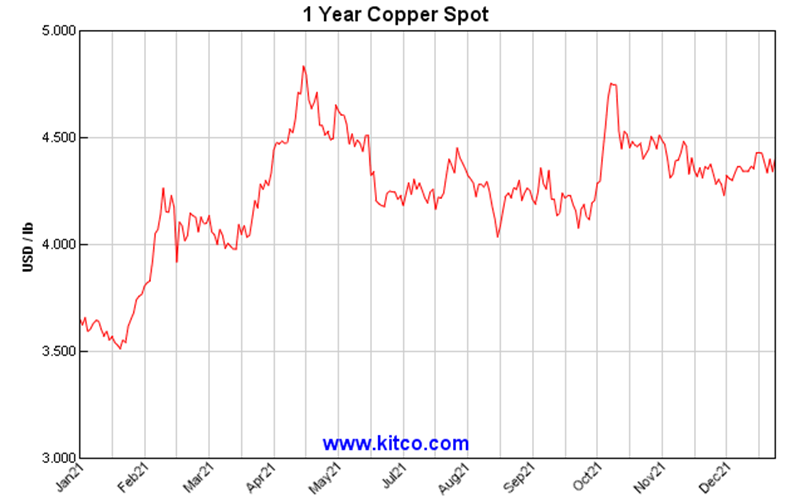 During the first half of 2021, copper rallied off the back of a sharp recovery in economic activity across the world, led by top consumer China. Also pushing prices higher was the belief that pandemic-related stimulus, plus the global push for decarbonization, will further lift demand for the industrial metal.

That saw copper prices break the $10,000/t level towards the end of April, the first time that has happened in a decade, and eventually surge to a new high the week after. 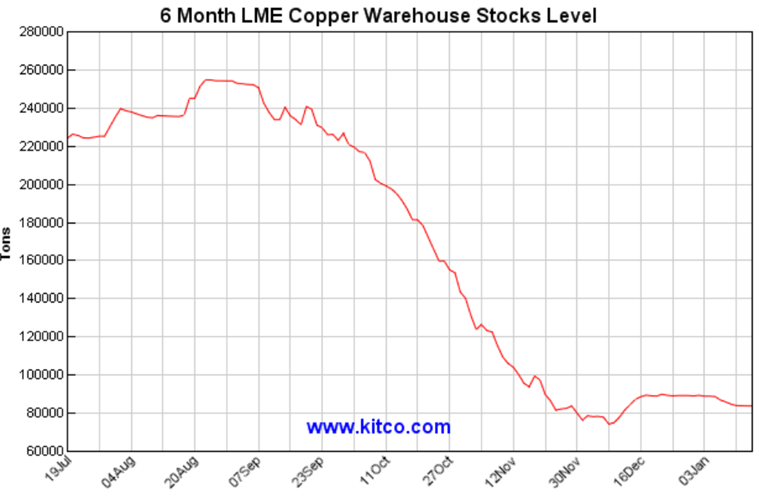 Then in the second half, copper received yet another boost amid an energy crisis that affected several major producers and threatened global supply. In October, a surge in metal orders from warehouses in Europe saw the LME inventories plunge by as much as 89%, to its lowest in 47 years.

All these events factored into copper's record-breaking year, though many believe that the red-colored metal is just getting started. Is another copper rally on the cards in 2022 and beyond? We'll explore in detail below.

Analysts tend to agree that copper market volatility is likely to persist for much of 2022 and several conflicting forces are in play. However, copper prices will still be supported by stronger demand, even should the economic slowdown in China and complications with its real estate sector have a material effect on the global market.

This is because investments in clean energy and associated infrastructure will continue outweighing the headwinds. 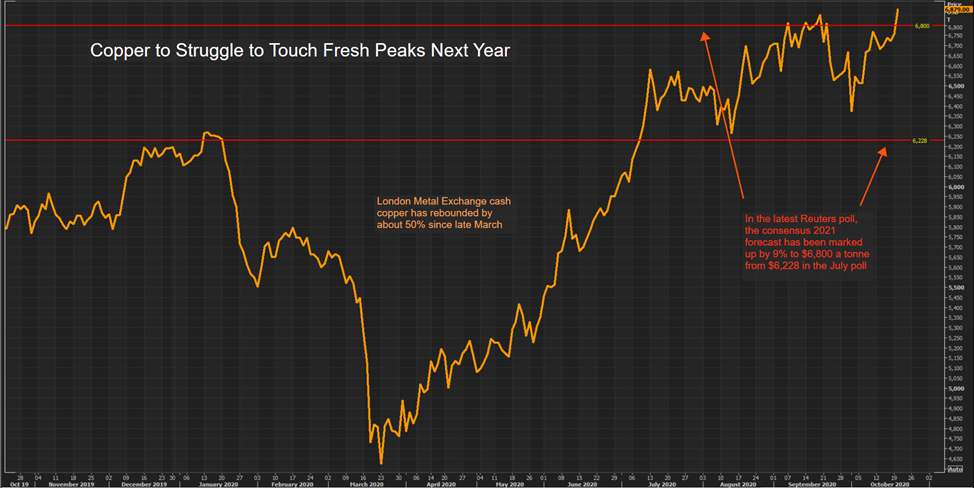 Eoin Dinsmore, research manager of base metals at CRU, recently told Investing News Network that the "growth in electric vehicles and renewable energy will result in copper demand in China and globally in 2022."

CitiBank wrote in its November outlook that "decarbonization will drive consumption", and "higher prices will be needed to draw in enough copper scrap to meet longer-term demand."

Against the backdrop of the green energy transition, analysts including Fastmarkets' Boris Mikanikrezai still expect copper prices to remain in an uptrend in 2022, though the upward path could be less steep compared to last year.

Karen Norton of Refinitiv told INN that she is anticipating further strength and the possibility of multi-year highs, but not necessarily new record highs, this year, as the energy transition narrative has grabbed the market's imagination earlier than perhaps expected.

Panelists recently polled by FocusEconomics have presented diverging views on the price outlook for 2022. The minimum forecast for Q4 2022 came from Euromonitor at $6,642/t, while the maximum forecast was Goldman Sachs' $12,250/t.

Bank of America recently said it expects copper demand to hold firm this year and only sees a surplus in 2023. The bank forecasts copper prices to average $9,813/t during 2022.

Beyond 2022, those around the industry are mostly upbeat on copper, given the multitude of positive long-term forces that will be increasingly felt towards the end of the decade:

For the next 3-5 years, the general consensus is that copper will be a clear winner of the "clean energy" investment theme.

The cost-effective metal possesses several physical attributes, one of them being an excellent conductor of heat and electricity. Other properties include corrosion resistance, ductility, malleability, and the ability to work in a range of electrical networks.

Because of its industrial advantages, copper has been used by human civilizations for thousands of years and is now a key building block in electric applications, transportation systems and civil infrastructure. So, of course, it has a major role to play in the global shift away from fossil fuels and towards renewables.

In fact, analysts at Goldman Sachs are calling copper "the new oil", as the metal is a key part of sustainable technologies, including electric vehicle batteries and deriving clean energy.

"Copper will be crucial in achieving decarbonization and replacing oil with renewable energy sources, and right now, the market is facing a supply crunch that could boost the price by more than 60% in four years," Goldman Sachs wrote in a report May 2021.

Goldman analysts, led by Jeff Currie, also said that more copper will be needed to create the new infrastructure systems required for clean energy to replace oil and gas, but there has not been enough of a focus on this.

The Goldman team estimates that copper demand will therefore significantly increase by up to 8.7 million tonnes by 2030, if green technologies are to be adopted en masse.

Positive long-term outlook for copper also stems from the market dynamics that, as the energy transition moves forward, could distort the demand-supply balance of the metal.

By even the most conservative of estimates, diverging growths in copper consumption and mine supply would create a market deficit for years and even decades.

In 20 years, BloombergNEF says copper miners need to double the amount of global copper production, just to meet the demand for a 30% penetration rate of electric vehicles — from the current 20Mt a year to 40Mt.

Copper consumption by green energy sectors globally is expected to jump five-fold in the 10 years to 2030, data from consultancy CRU Group shows.

A study by energy consultancy Wood Mackenzie ahead of last year's COP26 conference estimates that, in order to limit the rise in global temperatures since pre-industrial times to 2°C, roughly 19Mt of copper will be needed to feed the energy transition over the next 20 years. 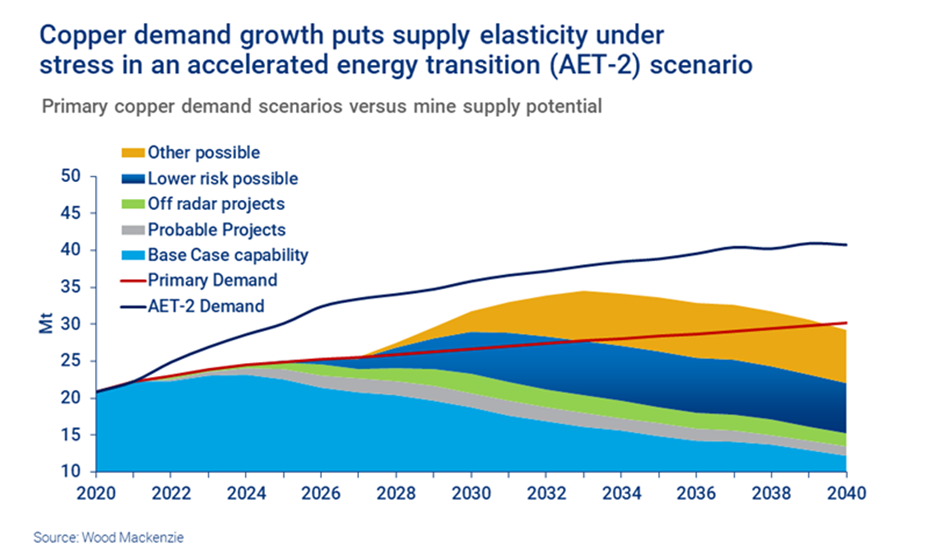 Meanwhile, S&P Global Market Intelligence predicts that due to a shortage of projects, copper supply will lag demand starting in the long term, putting our climate goals in serious doubt.

Production from existing copper mines, including concentrate and solvent extraction-electrowinning, is expected to increase at a CAGR of 1.0% in 2021-25 but fall at a CAGR of 4.7% in 2026-30, driven by declining ore grades and mine closures.

As a result, production from existing operating mines — not considering those assets that are starting up, project expansions or mine restarts — is projected to fall to 15.90Mt in 2030 from 20.53Mt in 2021. 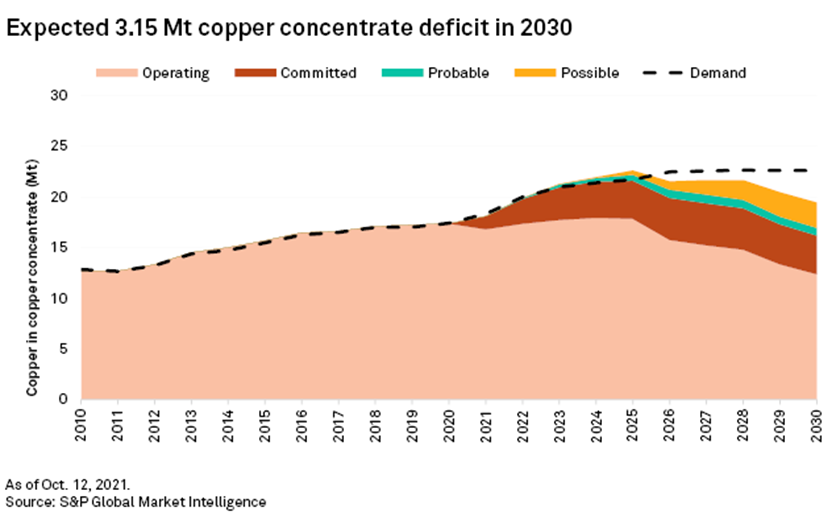 Diminishing supply from currently operating mines, combined with the projected increase in demand for copper concentrate over 2021-2030, would result in a 3.85Mt production shortfall in 2025, S&P Global estimates.

From 2026 to 2030, the copper industry will be unable to meet a growing demand for concentrate, even when including uncommitted development-stage projects that could potentially move forward and start up during this period, S&P Global says. 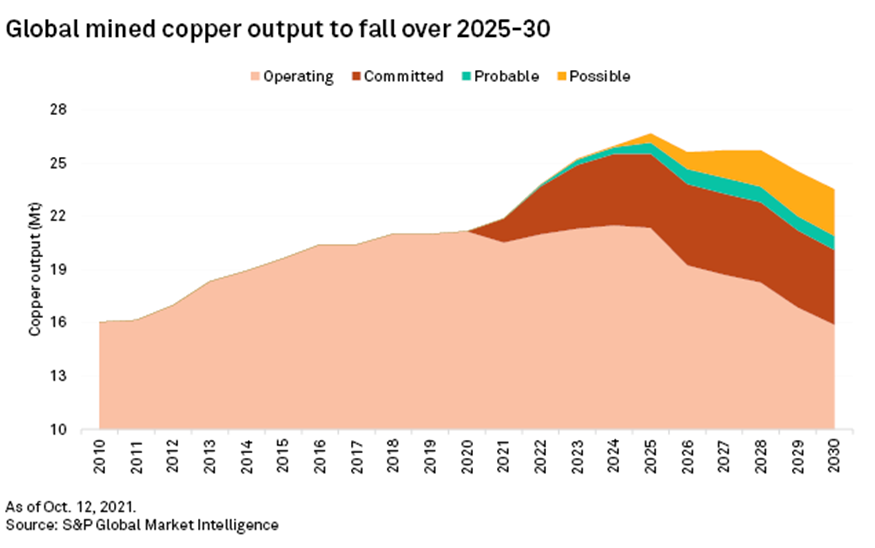 Vivek Dhar from Commonwealth Bank of Australia predicts that if copper demand increases 3.5% annually over the next five years, the market could see a supply shortage "very, very quickly."

Higher copper prices would also reflect years of underinvestment within the mining industry dating back to the 2000s, leading to a lack of new projects and a stagnant metal supply.

Dwindling copper reserves and lower ore grades at some of the world's largest mines also mean that a new deposit would just be replacing the existing output, thus even if a new project comes online, it may not contribute to the supply growth at all.

Without new capital investments, CRU predicts global copper mined production will drop from the current 20 million tonnes to below 12Mt by 2034, leading to a supply shortfall of more than 15Mt. 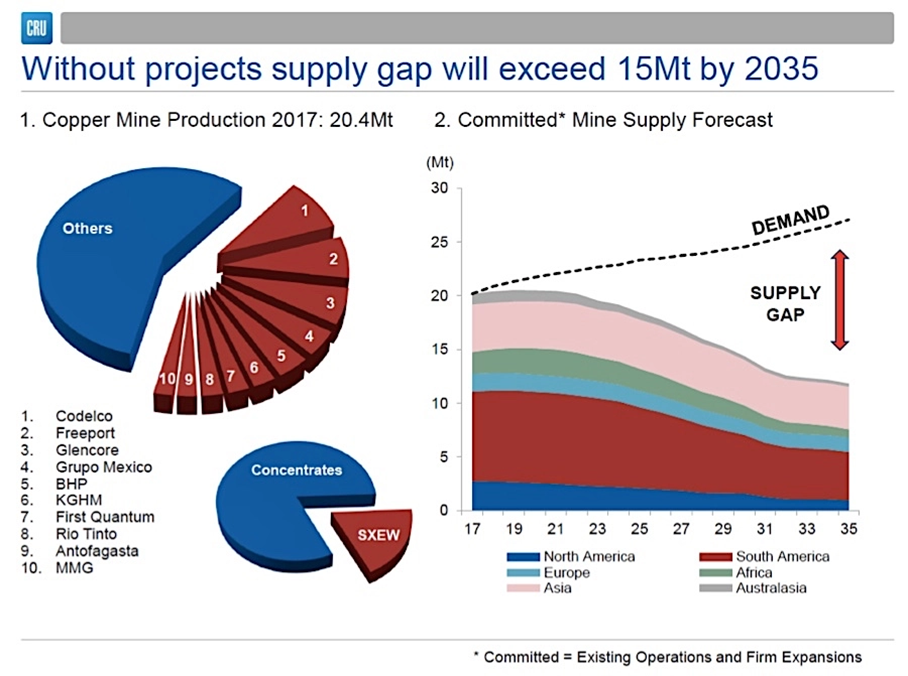 Over 200 copper mines are expected to run out of ore before 2035, with not enough new mines in the pipeline to take their place, CRU estimates.

Some of the largest copper mines are seeing their reserves dwindle; they are having to dramatically slow production due to major capital-intensive projects to move operations from open pit to underground.

Examples include the world's two largest copper mines, Escondida in Chile and Grasberg in Indonesia, along with Chuquicamata, the biggest open-pit mine on Earth.

These cuts are significant to the global copper market because Chile is the world's biggest copper-producing nation — supplying 30% of the world's red metal. Adding insult to injury, copper grades have declined about 25% in Chile over the last decade, bringing less ore to market.

A report last year by Goehring & Rozencwajg Associates found that both greenfield and brownfield reserve additions are expected to disappoint through the decade.

According to the New York-based research firm, the number of new world-class discoveries coming online this decade "will decline substantially and depletion problems at existing mines will accelerate."

Goehring & Rozencwajg also pointed out that miners have been "artificially" boosting reserves by lowering their cut-off grades when copper prices rise in order to make more profit. But this practice only works to a certain point, when cut-off grades cannot be reduced any further.

By 2015, the industry's head grade was already 30% lower than in 2001, and the capital cost per tonne of annual production had surged four-fold during that time — both classic signs of depletion. 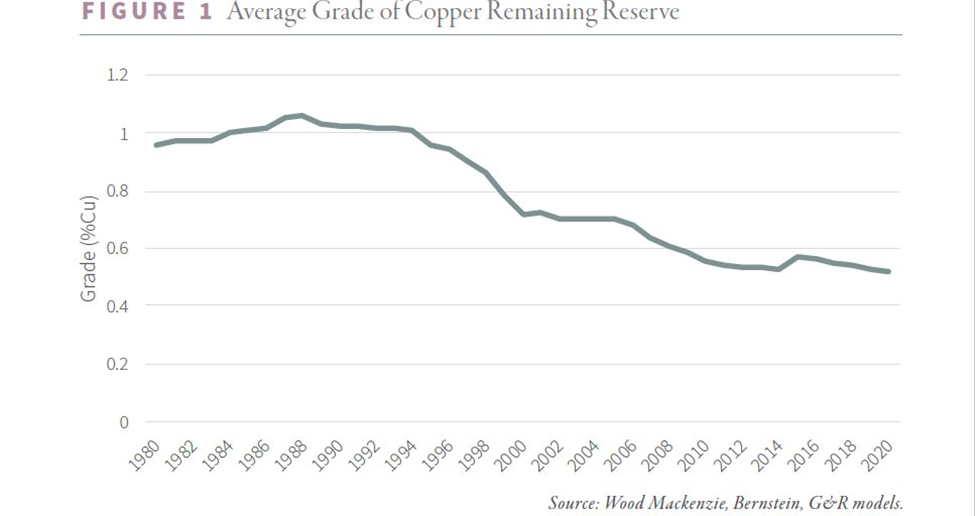 According to the Goehring & Rozencwajg model, the industry is "approaching the lower limits of cut-off grades," and brownfield expansions are no longer a viable solution.

"If this is correct, then we are rapidly approaching the point where reserves cannot be grown at all," the report concluded. This shines a light on the importance of making new discoveries in establishing a sustainable copper supply chain.

Over the past 10 years, greenfield additions to copper reserves have slowed dramatically, with tonnage from new discoveries falling by 80% since 2010.

And while S&P Global has identified 14 probable and 26 possible projects in the copper pipeline, the firm admits it's unlikely that all of those will come to fruition.

Next Wave of Copper Projects

In two decades, copper producers must, at the minimum, double the current production of 20Mt to have a chance of coming close to meeting demand. This equates to one new Escondida mine (1Mt annual production) every year for the next 20 years!

While such a feat is difficult to achieve, finding the right investments in projects leading to copper discoveries would help to close the supply gap. According to CRU, the copper industry needs to spend upwards of $100 billion to erase what it estimates to be a 4.7Mt deficit by 2030.

At AOTH, we are paying close attention to several companies that are holding onto highly prospective copper projects that could one day become contributors to the global supply chain.