Here comes the stagflation; (got gold?)

Just in case you've forgotten (or weren't around yet), the mid-1970s were marred by stagflation, the cost of living in rampant rise whilst the economy suffered demise. Specific to the three-year run from 1973 (and its intolerable lines for gasoline) through 1975, the annual Consumer Price Index came in respectively at 6%, 11%, and 9%, (kinda akin to this past year). The price of Gold settled 1972 at 58; come 1975, it settled at 141: that's a three-year net increase of +143%. Got Gold?

Then came President Peanut, (with a resurgence of petrol queues), and by 1980 Gold in a hyper-spike traded up to 873, (before unraveling to 300 by 1982 as President Gipper and the Economic Recovery Tax Act stimulatively kicked into gear).

Fast forward to today and we ask what's next? In this time of investors and sovereigns being disinterestedly impervious to any and all Gold stimuli, who knows? To the hardened analyst, everything that used to work no longer does, as algorithms -- bereft of all that is fundamental and even at times technical -- are running the show. But common sense -- as is its historical wont -- shall return along with positive interest rates (savings accounts), acknowledgment of non-supportive earnings (S&P "dip"), and recognition of real value (Gold and Silver).

But let's get to the point of the present, for 'tis the unmentionable that wrecks the whole story:

In other words, the pace of CPI inflation growth is actually slowing!

"But you can't make a trend out of just three months, mmb..."

Watch us, Squire. Linearly trendline those three months and come March 2022's CPI pace 'twould actually be DEflationary! But to your point, we are not predicting that. Inflation is all around us.

Still, did you notice that December's wholesale Producer Price Index (PPI) pace -- which logically leads the CPI -- was just +0.2%?

Either way, be it inflation -- or more likely stagflation -- with a doubling of the Federal Reserve's overnight lending rate in the balance, we recall: "Double double toil and trouble. Fire burn and cauldron bubble." --[W.S., 1623]. Move Macbeth to modern-day and with the muted real increase in earnings we've Acte I of "Has the S&P Crashed Yet?"

Clearly so, Squire. The "live" price/earnings ratio of the S&P 500 is now 47.7x. Its lifetime median is 20.4x, (and the average is 22.1x). To align with that as has always historically happened, if the ever-stubborn "P" refuses to go down, then the lackluster "E" needs to go up: indeed more than double!

Is it happening? No. With Q4 Earnings Season underway, five major Banks reported yesterday (Friday). Their average earnings increase over a year ago? +11%. That's it. Zip, Zero, Nada. Even as the FinTimes reported on Wednesday that "US companies tipped for strong earnings season..." (Do call their editor and inform them of what "strong" need be, i.e. over well over +100%).

But wait, there's more (or better stagflatingly-stated, less). We'll get to Gold's perpetually sleepy analytics in a sec, but first if perchance you haven't already looked at the website, here is the Economic Barometer. Not so great for President Ohno:

That rightmost drop is the vastest five-day oscillative plunge in the Econ Baro since March of last year, and moreover (should you be scoring at home) it ties for second worst in the past six years. Amongst the low-lights of the week's incoming metrics, Retail Sales actually shrank via their second-worst December in the 24-year history of the Baro. "What happened to Christmas?" The month's Industrial Production shrank as well. "I can't get the proper equipment!" --[Algernon, "Help!", '65].

Then from the Fed came nothing but calls for an urgent end to stimulus, with rate rises in the balance. (Still nursing that variably-priced debt? Get ready). From Chair Powell himself to Fed officials Barkin, Bostic, Mester, Brainard and Evans (after whom we stopped counting): flocking together are those birds of a feather. And again we opine: why are they waiting for 16 March when they "ought" just pull the trigger a week Wednesday, 26 January?

'Course the Fed could fool us and raise rates inter-meeting, à la Paul Volcker's 06 October 1979 "Saturday Night Massacre", following which the S&P fell a full -10% in just 15 trading days; (if you're still scoring, that in today's "Dow" terms would be a 3,600-point drop).

However, then there's "The Now", indeed the "Sleepy Now". A week ago we made a fairly iron-clad technical case for Gold to fall near-term some "62 points, suggestive of 1735". 'Twas based on Gold's daily MACD ("moving average convergence divergence") having approximated such drop on the prior 12 like negative crossings. But as stated above: "...everything that used to work no longer does..." So rather than drop, Gold netted a sleepy up week as we next see per the rightmost weekly bar: 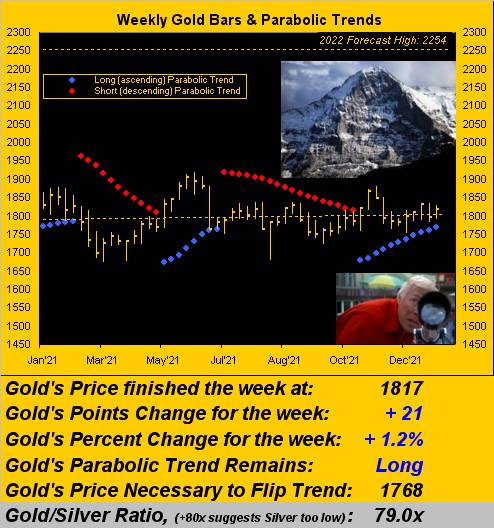 Next, we break it down into the last three months of daily bars for Gold on the left and Silver on the right. Whilst both precious metals are for the moment in linear regression uptrends, the declining "Baby Blues" depict such respective trends as weakening:

Then we've the 10-day Market Profiles for Gold (at left) and Silver (at right). If you get out your Funkin' Wagnalls and look up the definition of "hodgepodge", you'll see these two charts:

And for what 'tis worth in a stagnant market -- albeit with stagflation lurking in the balance -- here's The Gold Stack:

Gold's Value per Dollar Debasement, (from our opening "Scoreboard"): 4087

Finally: we bid a fond farewell to LIBOR. During our three-year stint with Barclays back in the 80s, 'twas really cool to talk LIBOR. It was like being "in the know", a real cocktail party attention-getting dazzler versus boring old "Prime": "We're international, baby. The Big Time!" And now 'tis gone. But today with stagflation in the offing, we primed to see Gold become The Big Time! 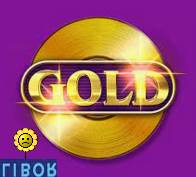